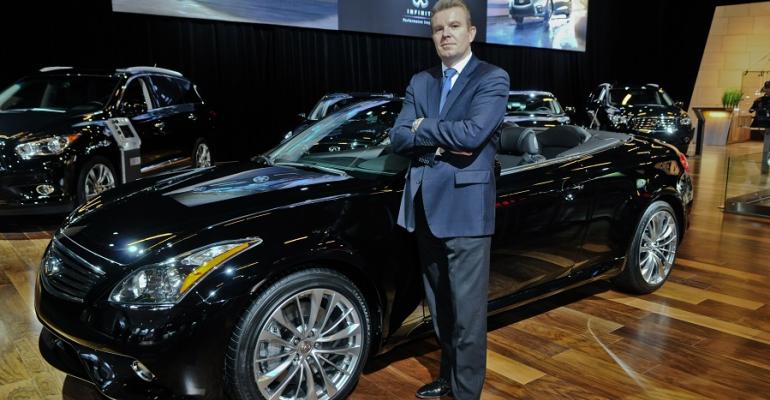 Meuneir: “We need to pick our battles and do it well.”
Industry News

Christian Meunier, who took over the helm of the luxury brand this month, wants Infiniti to concentrate on fewer vehicle segments while being nimbler and more daring.

DETROIT – Look for tweaks to the Infiniti game plan under new President Christian Meunier that could result in a smaller product lineup overall and a sharper focus on key market segments.

Meunier was named to the top job at the Nissan luxury brand Jan. 8, following the sudden departure of his predecessor Roland Krueger, who Infiniti says left to pursue other opportunities.

“Last week, when I was on my way to China, I found out that I was appointed the president of Infiniti global,” Meunier tells Wards in an interview on the sidelines of the North American International Auto Show just seven days into the new job. “So that’s how it is.”

But Meunier really is no stranger to the position. In November 2017, following stints heading Infiniti in Canada and Brazil, he was named vice president of global operations and immediately was put in charge of running the brand on an interim basis, because Krueger was out on what turned out to be a five-month medical leave.

“So I had to step into the role (then) and make it happen,” he says. “Then he resigned a couple weeks ago, and the company decided to put me in that role (permanently). There was a succession plan, and it was a pretty obvious move. It happened pretty naturally.”

Unlike the first time when he was keeping the chair warm for Krueger, Meunier now is eyeing changes he says will better target the brand and prepare it for 2021, when a new product wave is launched and a major shift toward electrification begins.

“It is pretty interesting, because I think the company is really in transition,” Meunier says, pointing to new models and concepts such as the Q70 sedan with an optional hybrid powertrain and the battery-electric QX Inspiration (unveiled here) that show the direction of Infiniti design, technology and powertrains. “So what do we do between now and then, that’s the main question. How do we get ready for these very exciting products in 2021?”

The answer, he says, is to narrow Infiniti’s vision and become faster moving and more daring.

“There’s a lot of simplification that we need to make,” he says. “There’s more nimbleness that Infiniti should be about. We’re a small brand, not a big brand. We’re a challenger brand, and we should not behave as a conservative, big manufacturer.

“We have an opportunity to be more nimble and take that to our advantage and be faster to react and not try to cover the entire market,” he adds. “I don’t think we have to be covering 98% of the market. It is not our destiny. We need to pick our battles and do it well. From that perspective, that’s what I’m probably going to bring in the next two or three years.”

As for the model lineup, Meunier sees two sedans – with possibly a third – being core.

When it comes to electrification, all future Infinitis will either be strong hybrids or full battery-electric vehicles, except the QX80, which will remain powered by an internal-combustion engine through its next generation.

“That will be the exception,” Meunier says. “We’re a customer-driven company (and) we don’t see the (QX80) customer being ready for (an electrified) powertrain in the short term.”

He says the next wave of Infinitis will be either e-POWER extended-range plug-in hybrids or full battery-electrics and not offer a choice of powertrain type. Infiniti isn’t specifying which models may go full electric, but the concept vehicles shown offer hints. According to Wards-LMC forecast data, the QX30 SUV will go BEV in 2020, when an all-electric Q30 sedan also will be introduced. There also is another all-electric SUV due in 2021 and a small crossover BEV model slated for 2024, the data shows.

Meunier says 50% of Infiniti’s total global volume should consist of electrified vehicles in 2025. China is expected to adopt BEVs more quickly and could be around that 50% penetration rate by then, he adds, with the U.S. more likely in the 20%-25% range.

“If electric provides the experience, provides the range and the infrastructure is in place, people are going to go electric,” Meunier predicts.

This year, Infiniti will put much of its marketing effort around the conventionally powered QX50 SUV.

“You’re going to see a lot of QX50,” he says. “We’ll have production constraints (on the model), which is bad and good. But this car is really going to be our focus.”