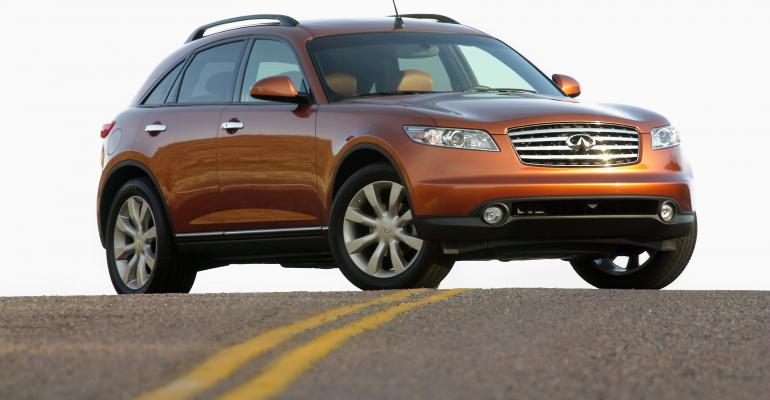 The new addition to the Japanese luxury brand’s lineup will bring its utility-vehicle count back to five (QX30, QX50, QX55, QX60 and QX80) in the U.S.

Infiniti announces a new addition to its lineup, a QX55 CUV due to arrive in the U.S. in summer 2020.

The model will have coupe styling, with a roofline reminiscent of that of the first-generation Infiniti FX, Infiniti says in a statement paired with a sketch (below) released today from the annual Pebble Beach Concours d’Elegance.

The curvaceous FX debuted in 2002 as an ’03 model, available with an optional V-8 and parent Nissan’s VQ V-6, which went on to win 15 Wards 10 Best Engines trophies.

The FX became the QX70 in 2014. The QX70 was discontinued in the U.S. at the close of the ’17 model year, as sales had dropped precipitously since the second-generation model’s debut in 2008.

The new addition to the Japanese luxury brand’s lineup will bring its utility-vehicle count back to five (QX30, QX50, QX55, QX60 and QX80) in the U.S.

Infiniti gives no indication of the new CUV’s positioning within its lineup. The automaker’s numerical designations have been indicative of size, segmentation and price. The 55 in the name suggests it could be slightly larger and/or pricier than the brand’s QX50 midsize CUV, which begins at $36,650 for ’19.

In bringing out a coupe-style crossover, Infiniti joins BMW and Mercedes-Benz in the burgeoning sub-sector. BMW offers the coupe-like X2 (soon to be discontinued), X4 and X6 CUVs, while Mercedes has the GLC model.