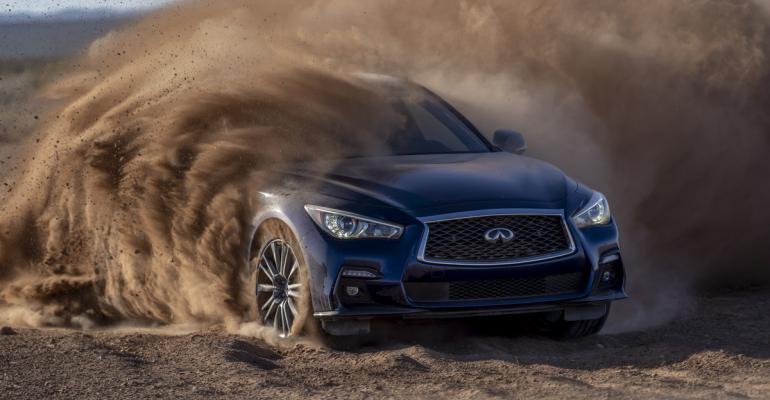 In a Wards Q&A, Jeff Pope talks about Infiniti’s future, when EVs might take off, the rising cost of technology and how dealers fit in.

He joined Nissan’s luxury brand in 2006. Before that, the Michigan State University graduate and metro Detroit native spent 11 years at Ford, including as a Lincoln-Mercury field representative to dealers.

Infiniti’s home office recently moved from Hong Kong back to Japan. “It makes sense for us to be there,” Pope says. “That’s where a lot of decisions are made.”

Infiniti offers a lineup of three cars and six utility vehicles in the U.S. The Japanese brand sold 149,280 units there last year, according to Wards Intelligence.

At a media event in Arizona and New Mexico, Infiniti marked its 30th anniversary by largely focusing on future plans. Those include the launch of five new models in three years and a gas-generated electrical propulsion system that likely will find its way into several upcoming models.

In a Wards Q&A, Pope talks about Infiniti’s past, present and future as well as when EVs might gain more popularity in the marketplace, the rising cost of technology and how dealers fit in the scheme of things.

Here’s an edited version of the interview.

Wards: When Infiniti started in 1989, how old were you?

Wards: You grew up in Detroit and worked for Ford. What did you think of Infiniti as a Detroit guy before joining it?

Pope: I’d be lying to say I knew a whole lot about the company at the time when I started at age 26 working for Ford. I knew of Infiniti, obviously.

But when we compared a lot of our cars at the time (with competitive products), we didn’t have Infiniti on our radar. Our Lincoln-Mercury customers were different types of consumers, too.

However, when I started looking at opportunities – when I realized I’d possibly be trying for a company switch – not a whole lot of companies made it onto my radar. Infiniti was not only high, it was among the top.

Wards: How has Infiniti changed over the years?

As far as where we have changed, the industry has gotten very difficult very fast because of technology.

The premise of vehicle changes and what you have to do for future products changes so rapidly it becomes difficult for a brand which may not have as high a (sales) volume as competitors to keep up with all the changes.

Our introduction of new technologies that were discussed at the 30th anniversary event has always been the basis of who we were. When you rely on that as your strategy, it becomes more difficult to do in this environment.

Technologies are changing so fast, it’s hard to be the technology leader like we were mid-decade. So, we’ve had to adapt a bit and determine where we are still going to be leaders and where maybe we take a back seat.

Wards: What did you come up with on that one, where you want to be the leader and where you don’t necessarily want to be? 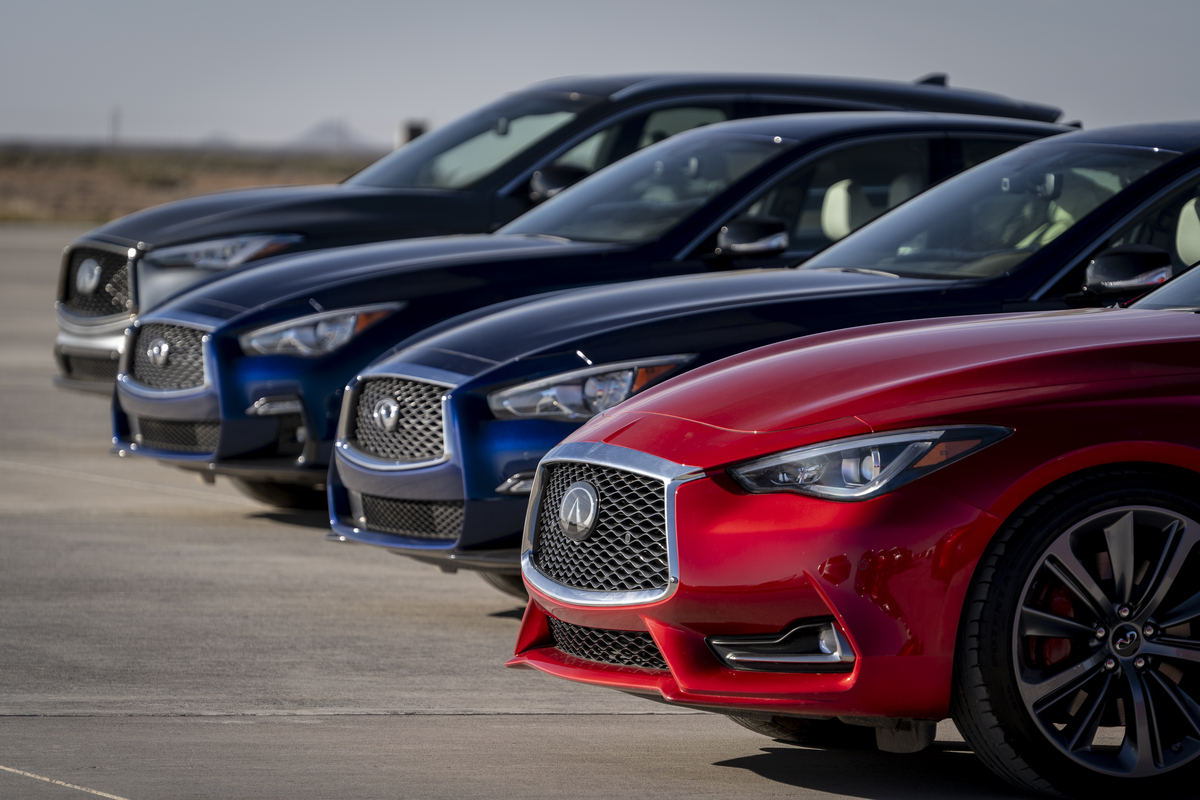 Pope: It’s not about not wanting to. That’s what we’re working through today. What we showed at the event on the electrification strategy is a good example. It’s not being an industry leader, because similar technology has been launched in the past. (Infiniti models lined up at 30th anniversary event in New Mexico, left)

But we’re putting forth right now the idea that we are going to strike out on our own, put in our best effort, attract (a particular customer segment) and be in the right place in the industry.

Wards: Technology is great, and consumers want it, but it isn’t cheap for an automaker.

Pope: It’s not. And I’m not sure an EV is necessarily for everyone yet. It may be in the future. But today, an EV is not on everyone’s shopping list.

Wards: When do you think EVs will be selling in numbers that are more impressive than they are now?

Pope: I’m actually impressed by the EV sales numbers today when you consider where we were just five or 10 years ago. If you think about life cycles of the auto industry, that’s pretty impressive. It started off with the Nissan Leaf coming to market (in 2010) and setting the course.

As we move forward, the answer to your question will be shared with us in two to three years because you have most manufacturers, including us, coming out with EV platforms. We’ll know fast if the industry will be accepting of that and grow or whether we will have saturated the industry quickly.

Wards: When you say the industry, are you referring to when consumers will accept EVs?

Pope: A lot of consumers accept it already. It’s going to be a question of how much more volume can you do in the EV world. That will be highly predicated on the price points of the vehicles and how many are offered.

If you look at all the different manufacturer announcements, there’s a lot of noise about different EVs launching in the 2022 through 2025 calendar years. What happens then will tell whether the EV market is ready to grow or will need a few more years.

But in the next five to 10 years, we’ll see a big bump in pure EV sales.

Wards: At the 30th anniversary event, you mentioned the importance of dealers. Why are dealers so special, other than you have to sell the cars through them, per franchise laws? (Infiniti QX concept EV interior, left)

Pope: But it’s well beyond that. I’ve been in the business for 24 years. I started off calling on dealerships and learning the business from the dealership level. I’ve seen over and over how it can work to the benefit of the manufacturer.

Infiniti started with 51 dealers across the nation. We trained and educated them on what it means to be an Infiniti dealer. Those dealers, and the ones we’ve since added, still live and breathe that. We have about 205 dealers right now. I know we’re as successful as a brand because of our dealers, not despite them.

Wards: When you talk to them these days, what do they tell you?

The good news is that every dealer I talk to about our strategy and where we are going is excited about it and understands it. To me, the only question is how we make sure we are benefiting ourselves and our dealers in the time it takes us to launch new product.

Wards: I recently talked with Larry Dominique, who’s in charge of paving the way for French automaker PSA to reintroduce the Peugeot brand in the U.S. He’s not trying to turn the dealership world upside down, but he spoke about the plan for their prospective retailers to heavily rely on digital tools so consumers could just about do everything to buy a car online.

Pope: I would put a different spin on that. The digital environment becomes more important as we move forward.

But you still need people who know day in and day out how to take care of customers. You need people in local markets. Having the local experience down on the ground in the dealership world remains extremely important.

However, digitized showrooms and smaller footprint facilities than we currently have certainly are future possibilities.

Wards: Where will Infiniti be in, say, 10 years?

Pope: Ten years is a long time away (in this industry). So it’s a difficult question. But let me answer it this way. We’ve given you a glimpse of the next three years. Consider two to three years afterwards how much we could expand upon that. What other segments where we could utilize our gas-generated EV systems as our platform.

I want to retain our heritage, understand who we want to be from a customer standpoint and have our vehicles be not only premium but technologically advanced and more important, technically connected to customers to benefit their lives.

It goes back to us saying luxury should be lived in.

It’s about how our automobiles can make people’s lives better. People spend so much time in their cars and rely on them for so many things. It’s important for us to participate in their lives.