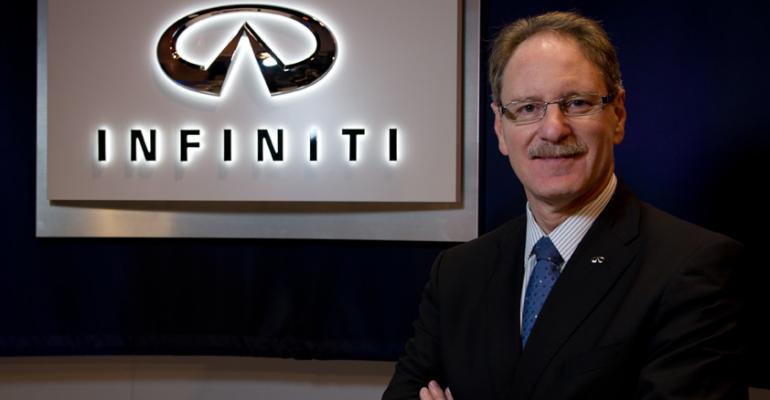 The upcoming Etherea compact car will be built in the U.K., as Nissan&rsquo;s premium brand moves away from Japan-centric production.

“If we decide to enter a particular market segment, those cars may need a new manufacturing plant, (and) Mexico is an option,” de Nysschen tells WardsAuto in an interview during the North American International Auto Show here.

“The decision to build there or anywhere is really going to be determined first by the confirmation of some new products we are evaluating right now.”

Luxury auto makers once avoided Mexico as a manufacturing base. But de Nysschen’s former employer, Audi, is constructing an assembly plant in the country that is expected to open in 2016 with output of the Q5 cross/utility vehicle.

Infiniti parent Nissan has a 40-plus-year history of assembling in Mexico, albeit of lower-priced cars. The auto maker is building a new plant in Aguascalientes, although it has not specified what models will be assembled there when it opens late this year.

Prior to de Nysschen’s arrival last year, Infiniti said it would sell 500,000 units worldwide by 2016. But the new global chief shies away from that timing, saying such proclamations distract from his main goal of brand-building and “encourages the wrong kind of behaviors.”

At the Automotive News World Congress here, de Nysschen tells attendees four new models are planned for Infiniti in the next four years. They will be in addition to the renewal of the brand’s existing models.

The new cars will place Infiniti in 80% of premium-vehicle segments. Its current lineup only covers 60%.

One of Infiniti’s future models is a production version of its compact Etherea concept sedan shown at the 2011 Geneva auto show.

The Etherea production car is “officially confirmed. It will be produced in the United Kingdom and will probably enter the market in late 2015,” de Nysschen says.

Building the car in the U.K., announced in late December, makes sense as Infiniti tries to break away from Japan-only production, he says. The brand already builds a model in North America, the JX cross/utility vehicle, and plans to make cars in China as well.

“We need to get ourselves out of exchange-rate-limited strategies,” de Nysschen says.