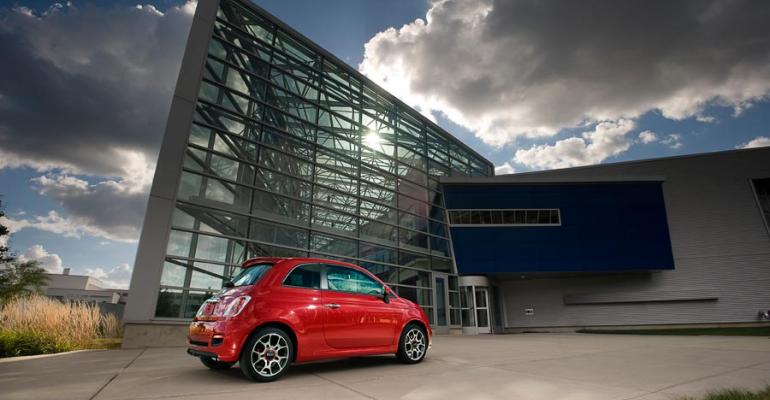 Industry on Pace to Hit EU Emissions Goal, But Some Auto Makers Lagging

Toyota and PSA have reached their 2015 CO2 targets, while Fiat is close. With new 3-cyl. engines coming, Renault, Ford, GM and Volkswagen all appear in good shape.

PARIS – If the auto industry continues to improve fuel economy this year and next at the current rate, it will meet the European Union’s carbon-dioxide-emissions goal of 130 g/km in 2015.

However, several companies won’t reach that mark unless they gain ground much faster than they did in 2011.

According to analysis by the environmental watchdog group, European Federation for Transport and Environment, Toyota and PSA Peugeot Citroen already have achieved their own 2015 goals and Fiat is a hair’s width away.

All three companies are sure to be well below the mark in 2015, as Fiat is the fastest-improving auto maker, and both PSA and Toyota are reducing mass and adding electrification to their cars.

The European rules give auto makers specific goals based on the sales-weighted average mass of the vehicles they sold in the 27 European Union countries. Fiat, for example, has a CO2 goal of 119.1 g/km, while Daimler’s is 138.3 g/km. The targets represent an 18% improvement over their averages in 2007.

The European Federation for Transport and Environment, based in Brussels, made its calculations on the basis that the average mass for each auto maker would remain the same in 2015 as in 2011. 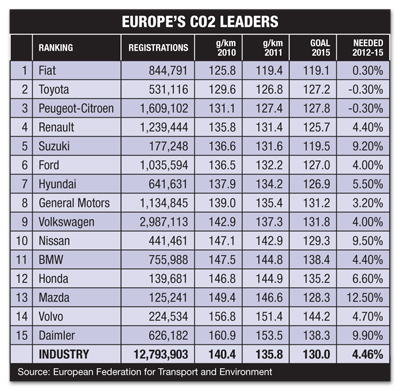 Renault, Ford, General Motors and Volkswagen all were within 4% of their goals at the end of 2011, and all have new 3-cyl. gasoline engines replacing older powertrains that required more fuel.

Renault launched its new engine this year in the Kangoo and Megane. In addition, the auto maker expects to have significant numbers of zero-emissions electric vehicles to factor into its mix in 2015, when the auto maker believes it will be the low-CO2 leader.

The European Federation for Transport and Environment continues to lobby for tougher fuel-economy regulations.

But while the Brussels-based ACEA, the European car makers group, agrees the industry is on track or even ahead of schedule for 2105, it emphasizes the huge effort and investment in research and development that will be needed to hit proposed tougher goals for 2020.

“Reaching the 2020 target is challenging, partly due to the difficulties in achieving the necessary market uptake of new technologies, the ACEA says in a written statement to WardsAuto. “To achieve a fleet-average of 95g/km, the industry will have to move more strongly towards hybrid and electric engines.”

Kaushik Madhavan, research director at global consultancy Frost & Sullivan, thinks that commercial pressure could indeed make it difficult for European auto manufacturers to comply with 2020 regulations due to the cost of new technology.

“The real challenge towards 2020 will be how much the (OEMs) are willing to spend per gram of CO2 reduction,” Madhavan tells WardsAuto.

– with Carmen Paun in Brussels