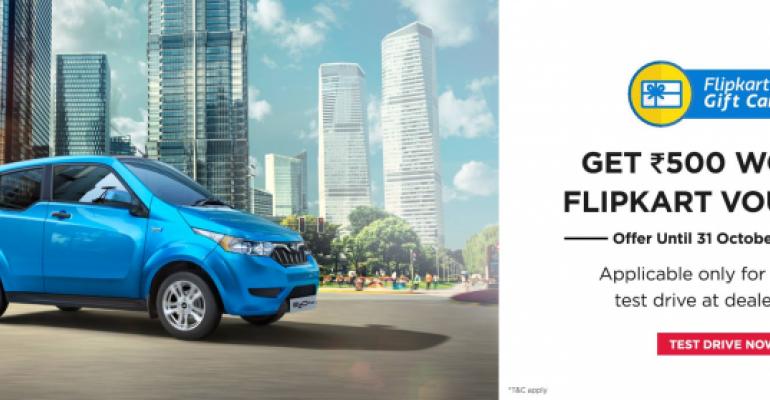 <p><strong>Mahindra e2oPlus one of handful of battery-electric vehicles in India.</strong></p>
Industry

&ldquo;We have decided to encourage electric vehicles,&rdquo; says Nitin Gadkari, central minister for road transport, highways and shipping. Those (in auto production) who don&rsquo;t want to come along, we will drag them to achieve the goal, for sure.&rdquo;

NEW DELHI – India’s automobile manufacturing industry, which already has an annual output of 25 million vehicles, is bracing itself for a comprehensive switchover to electric vehicles, with the government forming a clear policy that it wants combustion engines off the country’s roads.

This push is grounded in a report from the government’s key think tank, NITI Aayog (National Institution for Transforming India), which is headed by Prime Minister Narendra Modi and thus is highly influential. A paper released in May, titled “India Leaps Ahead: Transformative Mobility Solutions for All,” stresses the current central government dominated by the Bharatiya Janata Party wants to see a 100% switchover to EVs on Indian roads by 2030.

“India can save 64% of anticipated passenger road-based mobility-related energy demand and 37% of carbon emissions in 2030 by pursuing a shared, electric, and connected mobility future,” the report says.

Underlining these points at the annual convention of the Society of Indian Automobile Manufacturers in September, Nitin Gadkari, central minister for road transport, highways and shipping, said: “We have decided to encourage electric vehicles. Those (auto companies) who don’t want to come along, we will drag them to achieve the goal, for sure.”

These ambitious goals have, perhaps unsurprisingly, prompted anxiety within the Indian auto manufacturing industry. This is especially due to the current comparatively high cost of producing EVs – India’s gross national per-capita income in 2016 was just $1,680, according to the World Bank – and the lower-than-desired performance of currently available batteries.

“We can make the vehicle, but we cannot force people to buy it,” KK Gandhi, SIAM’s executive director-technical, tells WardsAuto. If the government wants to achieve this goal, he says, it will have to kick-start the industry by purchasing EVs itself at whatever their cost.

This is exactly how the Indian government appears to be moving ahead.

The central government’s Energy Efficiency Services has placed an initial order to procure 10,000 EVs to replace gasoline and diesel vehicles currently used by its officials over the next three to four years. A statement from the agency says automakers Tata and Mahindra & Mahindra will supply these EVs at Rs1.12 million ($17,000) each, which is 25% lower than the current retail price of similar vehicles in India. Both automakers will deliver the first shipment of 500 EVs covered by comprehensive 5-year warranties in November.

According to Gandhi, this price is double the cost of similar vehicles with internal-combustion engines. “To make the electric-vehicle model self-sustainable, the battery cost has to come down and for that, the government might need to put in factories for manufacturing electric (battery) cells,” he says.

Moreover, EV-charging infrastructure and systems need to be developed. The government must approve relevant regulations, and its officials and politicians are considering various potential business models, including battery swapping and battery leasing, Gandhi says.

“Installing a proper battery-charging infrastructure will be a challenge,” he acknowledges.

The process to build the infrastructure has started, however. Finnish energy company Fortum has signed a memorandum of understanding with central-government-owned construction company NBCC (India) for developing and operating 150 charging stations across the country in the next 18 months.

Sanjeev Sharma, managing director of engineering-services company ABB India, has been quoted in Indian newspapers as saying the company has submitted a bid to provide 4,500 charging points for EVs in India.

Vehicle assembly and charging infrastructure is not the whole picture. The segment of the auto-production chain that would bear the biggest impact of a switchover to EVs is component makers, and they might be the most reluctant to adopt the new technology.

“It is going to be a very significant challenge to the industry and the stakes are high,” Vinnie Mehta, director general-Auto Component Manufacturers Association of India, tells WardsAuto. “Almost 50% of our $43.5 billion (annual) sales comes from parts of ICE power range and drivetrains.” Demand for those parts could fall if EVs gain popularity.

Indeed, most of the $14 billion worth of plants invested in India’s auto-component industry is in engine-related component-manufacturing units, Mehta says. “It is important that the transition happens in an evolutionary manner so that industry is able to adjust,” he says.

With $11 billion in exports sold every year, India’s auto-component industry employs 1.5 million people directly and another 1.5 million indirectly, Mehta says, adding, “70 percent of the value of the car is what we supply to auto companies.”

Mehta doubts it would be possible for India to completely switch over to EVs by 2030. “By then there would be a significant number of electric vehicles, but the ICE industry would not be withering away,” he says.

However, according to Shailesh Pathak, a Chennai-based infrastructure specialist and a former managing director of the government’s State Infrastructure Development Corp. and the senior official at India’s public-works department, there are compelling reasons to believe the switch to EVs will be much quicker than anyone can imagine.

“From the national perspective it will reduce the oil import bill as most of the current vehicles run on imported petrol and diesel,” he says, “and from the citizens’ point of view it will bring down emissions and pollution.”

Pathak says Indian automakers already have demonstrated their adaptability by switching from gasoline and diesel commercial vehicles in past years to those fueled by compressed natural gas. “When electric-bus and 2-wheelers achieve scale, then the ecosystem will automatically adapt and existing gas stations will become electric-battery exchange points or charging stations,” he predicts.

Furthermore, Pathak says, when electric batteries achieve a range of 360 miles (600 km) or more, most large truck-fleet operators will convert immediately and cars automatically will follow.

Gadkari has given the auto sector fair warning. The transportation minister says: “Those supporting the government will have an advantage and those busy in minting money (by selling ICE vehicles and parts) will be in trouble. We will take the makers of petrol/diesel engine vehicles to task.”