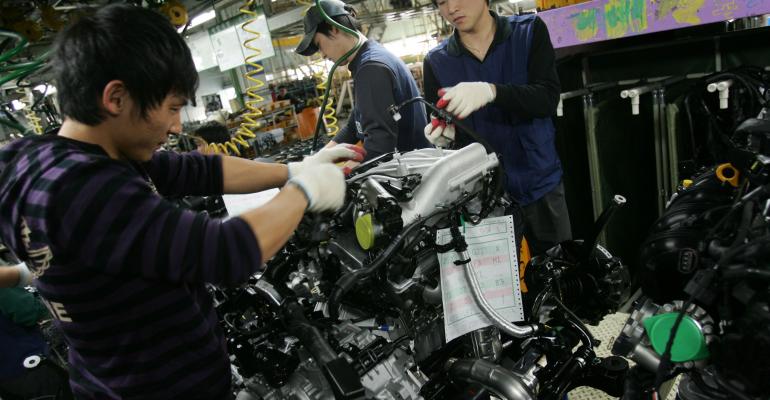 Hyundai Workers in Korea to Vote on Contract Offer

Hyundai is under duress of strike action at a time when it has a vital new model, the Kona compact CUV being introduced in the U.S. and Europe, and is suffering huge sales drops in China.

Hyundai management anxiously awaits the result of a tentative wage agreement with the union representing 49,000 unionized workers that was wrung out of the beleaguered company Tuesday.

The automaker is under duress of a strike by the Korea Metal Workers Union at a time when it has a vital new model, the Kona compact CUV being introduced in the U.S. and Europe, and is suffering huge sales drops in China.

Collectively this will increase annual wages for the workforce covered by the agreement by about 1.32 trillion won ($1.2 billion).

It will cost even more as an additional 20,000 salaried workers, by custom, will be slated to receive comparable wage increases.

That will be a hard pill to swallow for a company that reported operating income of 1.2 trillion won ($1.1 billion) for third-quarter 2017 and net income of just 939 billion won ($870 million).

Analysts note that at year-end Hyundai workers are eager for the traditional bonus payments the union has won annually from the company, and this may be incentive to approve the tentative deal.

However, Hyundai workers’ mood is far from conciliatory. Hyundai confirms KMWU leadership ordered workers to strike for four hours on both the day and afternoon shifts Monday, when the deal was coming together, and again Tuesday, when union bargainers accepted management’s offer and agreed to put it before workers for ratification.

Kia Motors, also at loggerheads with its union and facing the same wage demands made of Hyundai, may come up with a similar offer, analysts anticipate.

A Hyundai Motor Group spokesman, who speaks for both companies, tells WardsAuto, “We hope the company and the labor union of Kia Motors will reach an agreement at the earliest possible date.”

Kia is no less in need of a settlement so that it can bear down on its export business and try to offset its China losses while it seeks to improve performance in other markets.

Combined sales of both Hyundai and Kia are certain to be well below 2017 targets when the numbers are tallied in a few days.

At the beginning of the year, Hyundai Motor Group had set an 8.25 million-unit target for combined sales of Hyundai and Kia. Most analysts predict the final number will be about 7.25 million – the automakers’ lowest collective sales figure in the past five years and more than a 2% decline from the 7.9 million vehicles sold in 2016.

Hyundai Motor Group reportedly has lowered its 2018 sales targets in anticipation of continued declining sales in China and tough going in the U.S. market. The goal for next year, according to industry sources, is set at 7.7 million, 550,000 units less than the 2017 target of 8.25 million.

The union agreed in the 39th wage negotiation session that workers would meet production schedules throughout 2018.

If KMWU members approve the new pact Friday, it will be business as usual at all seven of Hyundai’s domestic plants in Ulsan, Asan and Jeonju. There will be a one-day traditional holiday on Jan. 1.