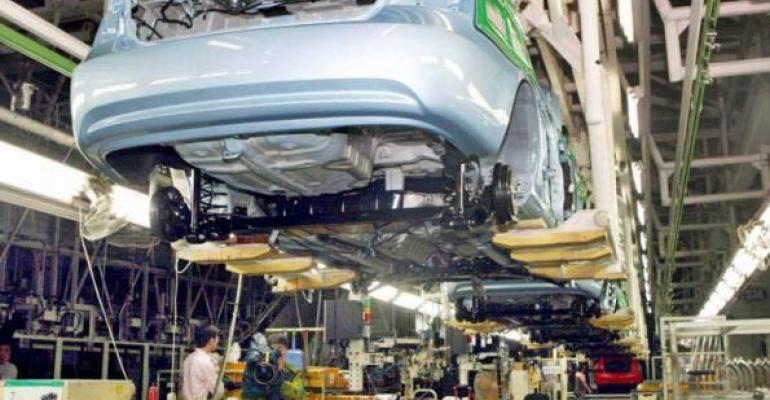 The monthly salary increase is less than 53% of the KMWU&rsquo;s intention, as well as less than what the union was able to secure in its 2014 wage agreement.

Hyundai’s organized labor group in Korea tentatively agrees to a new wage pact boosting monthly pay for workers, although the strike settlement surprises industry experts because it is half of what the Korean Metal Workers Union originally sought.

The monthly salary increase is less than 53% of the KMWU’s intention, as well as less than what the union was able to secure in its 2014 wage agreement.

There was considerable worry ahead of talks when the new hardliner president of the Hyundai Branch of the KMWU was elected to his post at the end of November. Park Yoo-ki previously served as president in 2006-2007 and called numerous strikes, including a walkout that led to Hyundai’s second-largest strike-related production loss in company history.

Park also had served as president of the KMWU in 2009-2011. It is the umbrella union that sets the wage and policy guidelines for its various units to follow in wage negotiations.

However, Park appears to have donned velvet gloves for the latest round of negotiations to ink a deal relatively painless to Hyundai.

The new agreement came at the end of a record 11-hour bargaining session on Dec. 24 between Park and Hyundai Motor Co. president Yoon Gap-han. Park took office as union president Dec. 10 and held meetings with management from Dec. 15 to Dec. 24.

Park said he wanted a deal before year-end because it was a key promise he made during the union election. He also issued a statement saying he realized the settlement was not a satisfactory one, but it had been made to help the faltering Korean economy and the automaker’s slumping sales and earnings.

The remarks are considered a flip-flop for Park, who had campaigned for the presidency with fiery rhetoric. His campaign included a promise to firmly buck Hyundai’s plans to implement a merit-based wage system to replace the current seniority-based system.

Park did keep that promise, although he agreed in writing to meet with management to continue negotiating the matter in 2016.

Park also had pledged to block Hyundai’s proposed implementation of a wage-peak system that would reduce workers’ wages as they neared retirement age. The KMWU opposes the government-backed idea.

Park agreed to let Hyundai implement the wage-peak system for employees at the manager level or above, to be effective in 2016. Under the system the senior employees will receive a 10% wage reduction in pay at age 59, and an additional 10% reduction at age 60 for the final year of employment.

Though the union team would not let Hyundai implement the system for shop floor workers, the agreement calls for the two sides to discuss possible extension of the wage-peak system to cover all workers during 2016 wage negotiations. The subject is highly sensitive as the average age of Hyundai’s fulltime unionized workers is 45.5 years.

Hyundai agreed to implement a 1-hour reduction in the daily work schedule, cutting an hour from the 9-hour afternoon shift. The former 8-plus-9 work schedule will be replaced with an 8-plus-8 schedule, starting immediately.

On its side, the union pledged to increase productivity, including a reduction in the duration of work breaks.

The accord comes nearly eight full months after negotiations began June 2. The talks, already stretched, were interrupted in late October because the term of the former union president had run out and an election had to be called, which Park won.