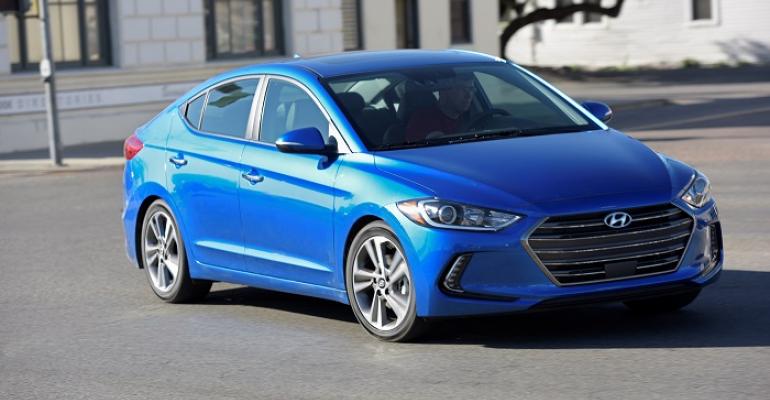 Zuchowski says making the Santa Fe midsize CUV at the automaker&rsquo;s Montgomery, AL, plant alleviates the issue of having to build cars the market may not want to keep the plant running at capacity.

IMPERIAL BEACH, CA – Hyundai is aiming for roughly one-third of its U.S. deliveries this year to be light trucks, despite a car-heavy launch schedule.

“By the end of this year, if we get what we think we’re going to get in terms of incremental production, that’s going to give us 250,000 CUVs and that’ll get us a 30%, maybe 32%, truck mix,” Dave Zuchowski, president-Hyundai Motor America, tells media here last week at a ’17 Elantra sedan preview.

Hyundai has made no secret of being what Zuchowski calls “out of whack” with the rest of the U.S. auto industry, with a much bigger share of cars than light trucks sold.

Zuchowski says the previously announced move to make Santa Fe midsize CUVs at the Korean automaker’s Montgomery, AL, plant alleviates the issue of having to build cars the market may not want to keep the plant running at capacity.

Montgomery is slated to assemble 50,000 of the Santa Fe Sport 2-row variant, which means 50,000 fewer Sonata and Elantra cars will be built at the plant this year, Zuchowski notes.

Honda’s redesigned Civic sedan went on sale in the fall, and the coupe is arriving this spring.

Meanwhile, Chevrolet is bringing a hatchback version of the Cruze, Kia is launching a redesigned Forte and Nissan is refreshing its Sentra.

Still a year away is the refresh of the Sonata.

After an underwhelming reception to it, WardsAuto reported last year Hyundai was busy working on a change to the car’s sheet metal for its mid-cycle refresh to recapture some allure lost in the ’15 redesign.

“People would seek us out because we look different, and we don’t get that now,” Zuchowski told WardsAuto in 2015 of the realization Hyundai had pulled back too much on the ’11-’14 model’s Fluidic Sculpture design with the current generation.

“This is a very well-integrated change. It really addresses some of the concerns about, ‘Did we go too conservative on styling?’ I think it’s beautifully done, really nicely executed,” he says, noting the grille will be updated to more closely resemble the design seen on newer Hyundais such as the Tucson CUV.

Even bigger competitors are struggling with their midsize sedans as more Americans flock to light trucks.

The class-leading Toyota Camry gained just 0.2% in volume last year compared with 2014, and a top Toyota official told WardsAuto last month that 17%-18% of the Camry’s 429,355 sales were to fleets. Toyota typically maintains a 10% fleet mix per model.

Despite the expected increase in output of the Tucson and Santa Fe this year, as well as plans for possibly four more CUVs to be added to Hyundai’s U.S. lineup in coming years, Zuchowski foresees cars always comprising a bigger share of sales for the brand as it doesn’t participate in pickup segments.

“We’re still a car-based company generally speaking…but if you look at Kia right now, because Soul is classified as a truck, Kia sells about 54% truck, so they’re in line with where the market is,” he says.

With possibly four new CUVs, including an A-segment box similar to the Soul, Zuchowski sees Hyundai’s truck mix topping out at 45%, a mark he is content with as it is in line with the mix at Toyota and Honda in the U.S.