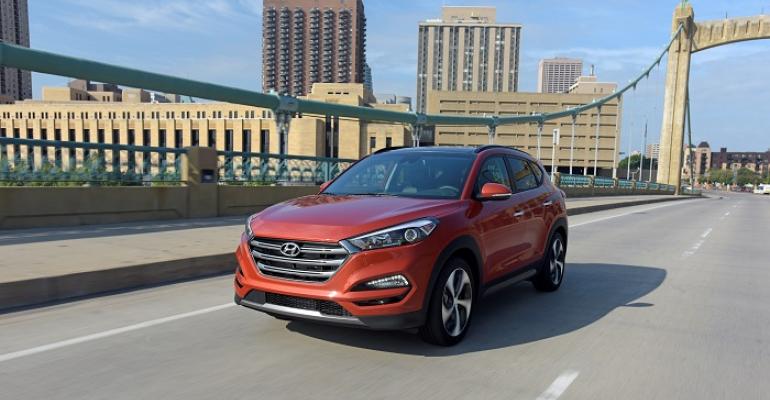 The Korean brand hopes light trucks will account for 45% instead of 27% of its total U.S. sales, putting it on par with Japanese competitors.

VANCOUVER, BC, Canada – Having rejected the Creta model from overseas last year, Hyundai Motor America is turning its attention to launching a U.S.-tailored B-segment CUV late next year.

“We actually cost ourselves a year-and-a-half by passing on the Creta and going with a car that we think better fit the U.S. market,” HMA CEO Dave Zuchowski tells WardsAuto in an interview here, adding the brand recently revealed the model to a positive reception at its Las Vegas dealer meeting.

Small CUVs are one of the fastest-growing vehicle groups of 2016.

Thanks to strong sales of the 2-year-old Subaru XV Crosstrek and 1-year-old Honda HR-V and Chevy Trax, plus newer entrants such as the Mazda CX-3, sales of small CUVs rose 44.5% through July to 554,350 units.

For the car-skewed Hyundai, adding to its CUV portfolio and improving sales of its existing Tucson and Santa Fe CUVs is crucial to maintaining its position in the U.S. new-vehicle market, which increasingly is dominated by crossovers and other light trucks.

WardsAuto data shows light trucks accounted for 61.1% of total U.S. light-vehicle sales in July, up from 7.6% from year-ago.

Hyundai promised dealers at the Las Vegas meeting that better days were ahead for its CUV lineup.

“Our message to the dealers was right now we offer three crossovers that have some overlap in terms of price and package and aren’t directly in the sweet spot of any one of the segments,” Zuchowski says. “They’re more on the periphery of segments. And what you’ll see is significant new entries…(and) realignment of (the) Tucson, Santa Fe and Santa Fe Sport to provide greater positioning and differences in packaging and looks between those three.”

With the new subcompact model and rejiggering of Tucson and Santa Fe, Hyundai hopes to raise its CUV ratio to 45% of total U.S. volume, which would place it below industry average but on par with Toyota, Honda and Nissan.

Meanwhile, Zuchowski says Hyundai continues to study the possibility of an A-segment CUV as well as push for a production version of the Santa Cruz crossover pickup concept.

Despite telling WardsAuto in late January an announcement was imminent, HMA still is waiting on the go-ahead for production by parent Hyundai Motor in Seoul.

“Mike O’Brien (Hyundai Motor America vice president-corporate and product planning) was back in Korea last week (for) a design review on the Santa Cruz, so it’s definitely making progress,” he says. “It’s still not officially greenlit, but a tremendous amount of work is being done on it, I can tell you that.”

In addition to the new Hyundai-brand CUVs, the South Korean automaker will retail two new models under its just-birthed Genesis luxury brand.

The unnamed models, a compact CUV and midsize CUV, are not imminent, however. The compact CUV will be off the same platform as the G70 sedan, a new 3-Series competitor due in first-quarter 2018, while the midsize model will be underpinned by the current G80 platform. The G80 is the former Hyundai Genesis mid-large luxury sedan and is on sale now at U.S. Hyundai dealers.