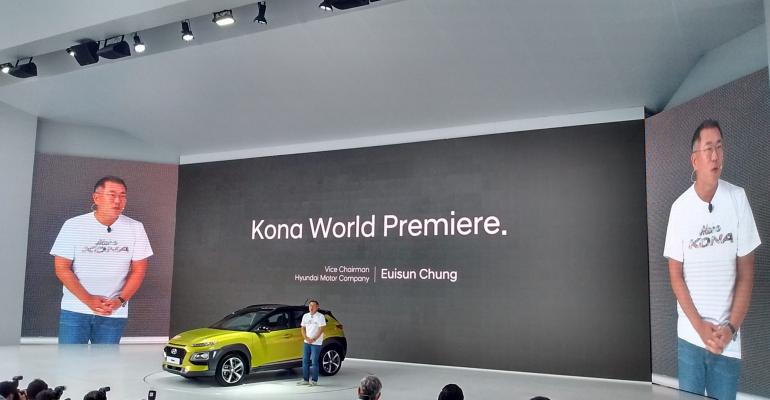 The Hyundai vice chairman reiterates the desire to offer CUVs from A to E segments and says the new Kona B-CUV will get EV and FCEV versions next year in Korea.

Dressed in a T-shirt and jeans to preside over the youthful, Hawaiian-themed introduction of Hyundai’s new Kona CUV, Chung admits to the automaker’s current challenges but is hopeful about the future.

“If you look at our sales, (they are) not faring as great as we expected,” he tells media June 13 at the Kona subcompact CUV’s premiere.

In the key U.S. market, Hyundai brand sales were down 7.5% through May. Hyundai posted the largest decline of all U.S. light-vehicle brands last month in the U.S., falling 21.2%. It blames the drop on fewer sales to daily-rental fleets last month vs. May 2016. The brand in the U.S. had a 25%/75% fleet/retail sales ratio in 2016 while the industry-average fleet percentage was 18%.

Hyundai’s reliance on car sales continues to be an issue, as well.

Given the global growth in light trucks, specifically CUVs, Chung reiterates Hyundai’s plan to blanket the sector with size ranges. Hyundai will offer CUVs in A- through E-segments by 2020. Additionally, he confirms Hyundai’s upcoming electric and fuel-cell electric CUVs will be derivatives of the Kona, to be sold in Korea beginning next year. The Kona EV may have a 242-mile (390-km) range, which would edge out the Chevrolet Bolt electric car’s 238 miles (383 km) of range on a full battery.

Also unclear is whether the A-segment CUV will arrive in the U.S.

WardsAuto first reported Hyundai was studying an A-segment CUV for the U.S. In January 2016, then-HMA CEO Dave Zuchowski said the brand was looking at such a model as a replacement for the B-segment Accent hatchback and that such a vehicle might be boxy, but smaller than Kia’s B-segment Soul car.

In a question-and-answer session with media following the Kona unveiling, Chung says the days when Hyundai solely can focus on producing a good car are over.

“We are very much focused on clean mobility, freedom in mobility and connected mobility,” he says, noting Hyundai’s activities on all three fronts, including a plan to launch 14 green (hybrid, plug-in hybrid, electric or fuel-cell) vehicles by 2020.

Some of those models already are on sale, including the Ioniq hybrid, PHEV and EV.

Chung says of the 14 green vehicles due, the company sees EVs taking the largest portion of sales.

He also says Hyundai is focusing on hydrogen delivery and battery storage and looking for partnerships in both areas.

As for autonomous vehicles, while Hyundai successfully has tested an Ioniq with Level 4 autonomous technology, Chung says improvements need to be made with respect to regulatory issues.

Chung speaks frequently of partnerships, noting Hyundai is open to those with fellow automakers, but he says Hyundai is most interested in partnering with information-technology companies.

He deems a partnership with Cisco for development of connected-car technology and other tech partnerships with Baidu and Uber as a good start and says Hyundai “will excel in this area compared to our competitors.”

Meanwhile, the Kona is set to launch sales this month in Korea with 26,000 deliveries targeted this year and 45,000 annually.

Exports to Europe are set to commence in August and to North America in December, Chung says.

However, Ramirez says December is the start of production for units bound for the U.S. and Konas won’t arrive at U.S. Hyundai dealers until late in the first quarter.

Hyundai expects to export 41,000 Konas to Europe and North America in the remaining months of this year, and 150,000 on an annual basis.

Ramirez says the latter figure includes other markets such as Latin America.

The Kona is being assembled at Hyundai’s Ulsan, South Korea, plant.