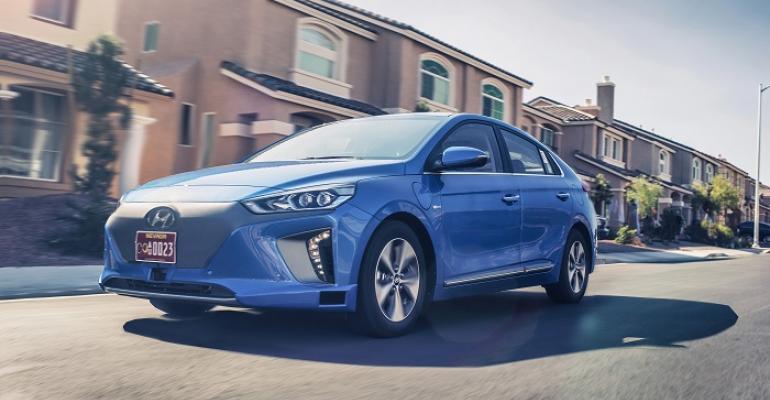 The autonomous Ioniq shown in L.A. will be joined by two more due at January&rsquo;s CES. Meanwhile, Hyundai will offer subscriptions and car-sharing of the Ioniq EV early next year.

Hyundai also uses its L.A. show stage to detail a subscription program for non-autonomous Ioniq EVs and its first large-scale car-sharing partnership, with WaiveCar and featuring the new EV.

The autonomous Ioniq shown today has a look similar to the electric, plug-in hybrid and hybrid Ioniqs, but features three Lidar sensors from IBEO in its front bumper, which has been integrated with the production Ioniq’s smart cruise control’s forward-facing radar and its lane-keep assist cameras.

The IBEO module has one front-laser lidar with a 130-degree array and two side lidars each with a 110-degree array. The car’s front mid-range and long-range radars have respective 90-degree and 45-degree arrays, while master and slave radars in the rear of the car each have a 150-degree array.

Hyundai says the hidden Lidar allows the Ioniq to detect “the absolute position” of vehicles and objects around the car, while the forward-facing radar detects relative location and speed of objects ahead “to aid in route planning.”

A 3-camera array, with two cameras detecting the structure of traffic signals and a third detecting their phase, also determines how close pedestrians are to the vehicle as well as lane markings. 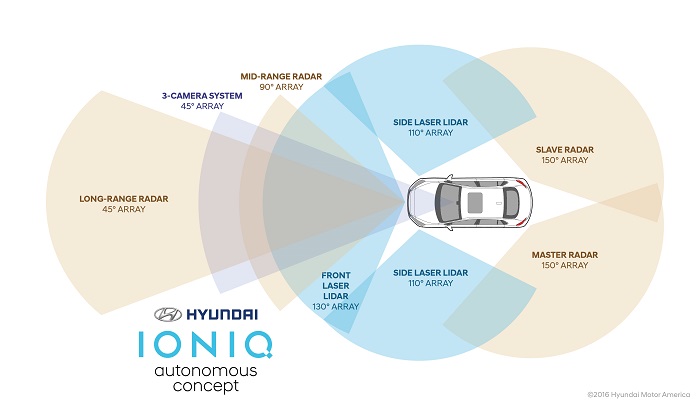 Hyundai last December won the right to test self-driving vehicles on Nevada roadways and says the autonomous Ioniqs will be giving media rides up and down the Vegas strip at January’s CES. The car should be able to handle high levels of pedestrian traffic, road construction and roadblocks, speed bumps, dogs off leash, playing children, shopping centers and intersections without traffic signals, Hyundai says.

The automaker promises simple-to-use controls and seamless transitions between active and self-driving modes for its autonomous Ioniq. It also is working on its own autonomous-vehicle operating system, targeting significantly less computing power that should bring about a low-cost platform for installation in vehicles “the average consumer can afford.”

Hyundai also uses its L.A. stage to announce Ioniq Unlimited, a way to drive the Ioniq EV outside traditional purchase avenues of buying or leasing.

Early next year, interested Californians can subscribe online to a plan with one fixed payment including unlimited mileage, electric-charge costs, scheduled maintenance and purchase fees.

Hyundai touts a no-haggle payment and the ability to select a vehicle from dealer inventory for a 24- or 36-month subscription term. A credit application can be filled out online, with the purchase completed at the dealership. “Once at the dealer, there’s no haggling; just sign a few forms and drive away in an advanced emissions-free electric vehicle,” the automaker says, adding it designed the process to be “the most transparent, stress-free and enjoyable ownership experience on the market today.”

Meanwhile, Hyundai says it has partnered with WaiveCar to expose the Ioniq EV to “millions of shoppers…for free,” starting in Los Angeles in January.

WaiveCar, touting itself as the world’s first all-EV-sharing program that runs on advertising dollars, allows interested drivers free use of an advertising-wrapped Ioniq EV for two hours.

The wrap, as well as a roof-mounted digital billboard, offsets usage costs. The display is 4G-connected and tailors ads to location and time of day. 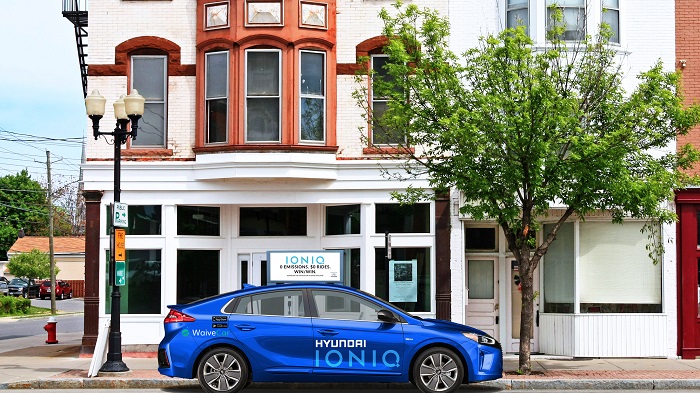 Drivers can elect to go beyond the 2-hour free period, paying $5.99 per hour for the Ioniq EV. Booking and payment is done via the WaiveCar app, with WaiveCar unlocking doors remotely.

The car-sharing service plans to put 150 Ioniq EVs into service in L.A. in first-half 2017. Three more cities, with an additional 250 Ioniqs planned, will launch by the end of 2017.

Hyundai Motor America’s Mark Diplo, director-corporate planning and strategy, touts the WaiveCar partnership as an awareness-builder for the Ioniq brand.

Sales of alternative powertrain models have been soft this year in a time of continuing low gasoline prices. WardsAuto data shows hybrid sales were off 12.8% through October and EVs rose just 3.3%. PHEVs, however, are bucking the trend. Thanks to the second-gen Chevy Volt, a revised Ford Fusion and new entrants from BMW, Mercedes and Porsche, plug-in sales jumped 55.5% in the year’s first 10 months, to 53,146 deliveries.