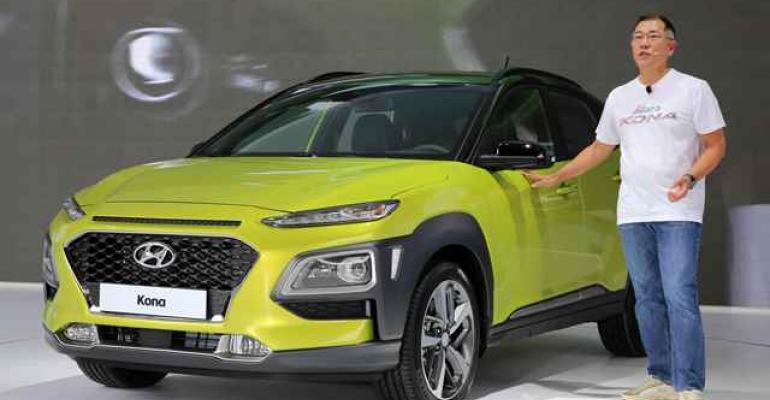 The Korean automaker has a lot riding on its new B-CUV, which it notes is in a very competitive segment. The group includes the Honda HR-V, Mazda CX-3 and Jeep Renegade.

The Korean automaker, which is seeking to grow light-truck sales, promises the Kona has the right mix of design, interior features and performance to effectively compete in the competitive small-CUV group. It also promises a CUV suited to urban driving or, with its available all-wheel drive, off-roading.

“With the Kona, we have created a stylish and highly functional CUV, perfectly suited to the needs of customers who pursue challenging, action-filled lifestyles,” Euisun Chung, vice chairman-Hyundai, says in a statement, adding the vehicle will “set new standards…with appealing design, cutting-edge connectivity and class-leading safety features.”

Hyundai has a lot riding on the Kona in the U.S., where 63% of light vehicles sold through May were light trucks, but where its sales still heavily favor cars. Through May, Hyundai tallied 194,414 car sales and 89,133 light-truck deliveries. While its light-truck sales rose 19.5% in the first five months, a 16.2% decline in car sales had the brand down 7.5% vs. year-ago, WardsAuto data shows.

Hyundai, along with Ford, Nissan and Toyota, is one of the latecomers to the Small CUV segment in the U.S. For two years, the automaker has been selling another B-CUV, the Creta, in developing markets. But a former U.S. Hyundai official told WardsAuto that vehicle was not stylish enough for U.S. audiences.

The Kona seems to solve the style issue, with a variety of dramatic exterior flourishes including slim, stacked daytime running lights with turn signals and separate from “futuristic” LED headlights. Reverse lights and brake indicators also are separate to LED taillights in the rear. 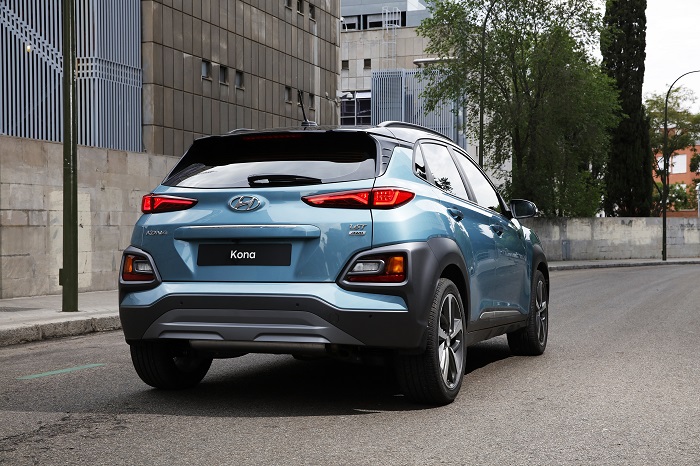 The CUV has contrasting black cladding along the lower body, which Hyundai calls “armor,” and a long wheelbase with short overhangs hinting at “sporty, nimble” handling.

The Kona wears Hyundai’s new family cascading grille with a mesh pattern, and it sits near “wing-type fenders.”

The Kona’s roof will be available in colors in contrast to its body to satisfy “customers with a desire to express their individuality,” the automaker says.

The interior has a horizontal character line to infer spaciousness and the audio/visual/navigation touchscreen appears to float.

“Soft, fluid details” surround the monitor as well as the heating, ventilation and air-conditioning controls to “enhance the comfort-focused environment.”

Hyundai says a new compact platform is used for the Kona, but in earlier statements noted the vehicle rides on Hyundai’s global B-car platform, which underpins the new Kia Rio subcompact car and future Hyundai Accent. Kia will be getting its own B-CUV, the Stonic, slated to be shown at September’s Frankfurt auto show. The Kona is 164 ins. (4,165 mm) long, roughly 3.9 ins. (100 mm) longer than the ’18 Rio 5-door.

Less central-tunnel intrusion by the CUV’s AWD drivetrain, rear suspension and exhaust system results in a lower floor in the rear of vehicle, aiding ingress and egress for backseat passengers and boosting their headroom.

A new intercooler layout and setting for the transmission is done to integrate the optional AWD and limit cabin intrusion, Hyundai says.

The driver’s seating position is said to be elevated for a more SUV-like experience. Split rear seats fold flat and there is a 2-level loading floor in the cargo area for golf-club storage, for instance.

A variety of engines will be available for the Kona. Hyundai is not specifying which ones will appear in the U.S., but in Europe the CUV will get a 118-hp 1.0L turbocharged and gasoline-direct-injected 3-cyl. with a 6-speed manual transmission.

The 2.0L is mated to a 6-speed automatic transmission and the 1.6L to the automaker’s 7-speed DCT.

A 1.6L diesel engine also is due for Konas sold in Europe and other select markets, Hyundai says.

The Kona uses a MacPherson-strut front suspension while the front-wheel-drive model gets a torsion-beam rear suspension and the AWD Kona has a dual-arm multilink rear.

The front suspension is said to have best-in-class tire trace “to enhance comfort and reduce” noise, vibration and harshness while incorporating “SUV geometry for refined body movement on rough roads or harsh off-road terrain.”

Sport, normal and eco drive modes are available, with each setting tweaking torque distribution and gear ratios. For instance, in sport mode there is early downshift on braking for an athletic experience and in eco mode longer gear ratios to improve fuel economy.

The Kona’s body has 51.8% advanced high-strength steel for lightweighting, while hot-stamping and structural adhesives, the latter applied along 376 ft. (114.5 m), enhance strength and rigidity.

A multi-load path is employed to disperse crash energy along multiple pathways to protect occupants during a collision.

For maximum connectivity, the automaker says Konas sold in North America will get HD Radio and 4G WiFi, while those retailed in Europe will have digital audio broadcasting (DAB) digital radio.

A “combiner” head-up display is available, with an image projected onto a glass panel situated behind the instrument panel, a setup somewhat similar to Mazda’s HUD. Unlike the Mazda HUD, Hyundai’s panel can retract into the IP when not in use.

Hyundai promises excellent daytime visibility for its HUD, which will show speed, lane-departure warning and navigation messages, as well as audio-system information.

The Kona, named after the region of Hawaii, goes on sale in South Korea later this month, with North American and European launches yet to be specified.

A special-edition Iron Man Kona will be available as a tie-in to the film Iron Man 3. The Kona Iron Man will be 1.6 ins. (40 mm) wider than the regular Kona for a “confident stance.” It also will have unique LEDs plus a matte-gray hood and red and gold accents.

While its long-term prospects are strong, sales in WardsAuto’s Small CUV segment fell 6.2% through May to 359,030 on declines among the group’s mid- and lower-volume models, including Kia’s Sportage, down 16.6%, as well as the discontinuation of the Mini Paceman and Jeep Patriot and Jeep’s changeover from the first-generation to second-generation Compass. The Patriot and first-gen Compass were two of the group’s best-selling models.