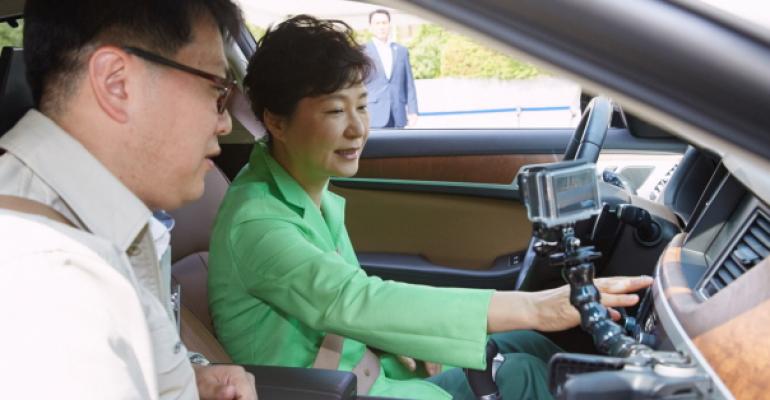 Park Geun-hye&rsquo;s Hyundai connection goes back to her first day in office, when she became the first Korean president to use a Korean car &ndash; a stretched Equus &ndash; as the official inauguration vehicle. Her predecessors rode in foreign-made limousines.​

South Korean automaker Hyundai Motor can boast of a friend in the highest of places: President Park Geun-hye.

The ties between the industrial powerhouse and the country’s first woman president were demonstrated when Park last week visited the Korea Aeospace Research Institute in Daejeon for a briefing on unmanned vehicles and drones.

A Hyundai Genesis equipped with the automaker’s advanced HDA (Highway Driving Assist) electronics and being used in the autonomous technology development program was on site.

Park took the wheel and the event was highly publicized by the government and news media; several photographs showed her in the driver’s seat with no hands on the wheel.

A spokesman tells WardsAuto the HDA system the president tested will be available on Hyundai and Kia vehicles in select markets sometime in second-half 2015.

Park told a group of 150 scientists, engineers and industrialists at the event that the nation needs to increase efforts to develop autonomous-vehicle technology. She noted Hyundai and its sister company Kia constitute the world’s fifth-largest automaker, and have the wherewithal to help put Korea at the front of the emerging autonomous-vehicle industry.

Although Kia does not bask directly in this presidential connection, a spokesman notes parallel autonomous-vehicle technology developments are taking place at Hyundai’s sister company.

It also was announced that a test track for autonomous vehicles will be opened in Seoul by 2019, and the government will work to remove red tape and streamline regulations so self-driving vehicles have greater road access throughout Korea.

Showcasing Park in its vehicle-brand promotions is a coup that must sting Hyundai’s competitors. Yet it is understandable in that Hyundai Motor Group is a major exporter and constitutes a key component of the South Korean economy, the world’s 11th-largest.

The Group, which embodies Hyundai Motor, Kia Motors, Hyundai Mobis and a network of affiliated parts and modules suppliers leads the charge for advanced automotive technology development in the country.

Shortly before leaving on a South American trade mission in April, Park participated with Hyundai Motor Group Chairman Chung Mong-koo in the opening of the Hyundai-sponsored Creative Economy Innovation Center for hydrogen-powered vehicles, located in the city of Gwangju.

Hyundai also released some 1,000 of its patents to the new center for use by the participating startups, and for use at an involved-technology training center.

Park’s connections with Hyundai Motor and Hyundai vehicles go back to her first day in office, when she became the first Korean president to use a Korean car – an Equus – as the official inauguration vehicle. Her predecessors all had used foreign-made limousines.

After leaving her private residence in a Mercedes vehicle equipped with special security features, Park got out and entered the stretched Equus to ride to the inauguration site. The Equus with the president-elect waving to huge crowds though the open sunroof was broadcast worldwide.

The automaker’s premium flagship got more exposure during Park’s April trade mission to Brazil, where she rode in an Equus provided by Hyundai Motor Brasil, as opposed to a host vehicle supplied by the nation being visited.

The Chosun Ilbo published a photograph of Park walking ahead of the shiny Equus when she arrived for an honor guard welcome at the president’s palace in Brasilia. In the accompanying article a Hyundai spokesman says Park’s use of the Equus “will be of great help in boosting Hyundai’s brand image in Brazil.”

With such a powerful unofficial spokesperson appearing at major events and public ceremonies alongside executives of the powerful automaker, or riding in or driving one of its vehicles, Hyundai’s profile and prestige are raised. And Park can see South Korea benefiting overall from the automaker’s rising brand value and technology advancements.