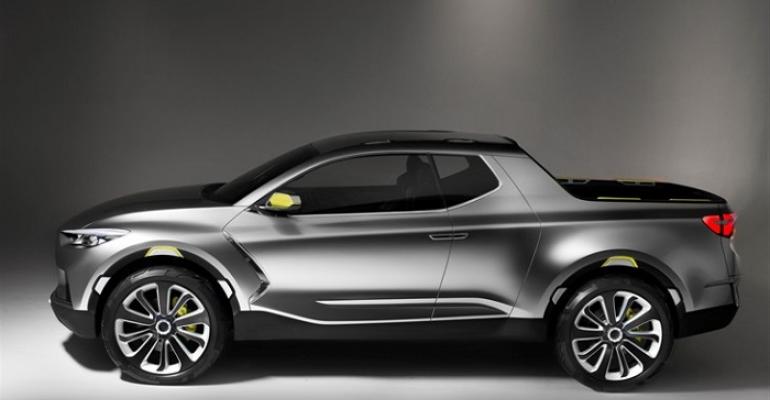 A compact pickup based on a Detroit auto show concept vehicle and an all-new B-segment CUV are near-certainties for the South Korean brand&rsquo;s U.S. lineup.

HUNTINGTON BEACH, CA – Hyundai likely will fix its weak light-truck presence in the U.S. by adding two new models to its U.S. lineup in coming years.

“We used the response from the media, consumers, employees and dealers and got a lot of energy in Korea around this…(so) we feel pretty good about it,” Zuchowski says of the likelihood of a Santa Cruz production model.

Feedback on the concept, which has been traveling to other U.S. auto shows this year following its Detroit debut, has been 90% positive, Zuchowski says.

Zuchowski emphasizes his brand is trying to do something different from traditional compact pickups such as the new Chevrolet Colorado and GMC Canyon.

The Santa Cruz concept, riding on the same platform as the new Hyundai Tucson compact CUV, blurs the line between a people- and cargo-mover with an extendable tailgate that when fully out creates a bed length similar to that of midsize pickups on the market. The concept also has an upright hexagonal grille, honeycombed headlamp projectors and rear-hinged doors.

Preserving the Santa Cruz’s design is seen as essential if a production model is to be successful, Zuchowksi says.

“The expandable bed and all that are really important to execute (and) the really unique styling is really important,” he says, noting the truck also needs to be fuel efficient.

The brand commissioned analysis, both in-house and externally, that shows there’s “good volume potential for” a production Santa Cruz, Zuchowski says without divulging a number.

He expects HMA’s Korean parent to decide whether the Santa Cruz is a go later this year.

In January, he said the pickup could come to market in three years, knocking a year off the typical new-vehicle development timeline.

Meanwhile, Zuchowksi says a B-segment CUV to compete with new entrants Chevy Trax, Honda HR-V and Jeep Renegade is “in our plans and has been for a while.

“We don’t see that as a passing fad,” he says of the small CUV segment, which also includes the Buick Encore, Nissan Juke and Subaru XV Crosstrek.

In its global portfolio, Hyundai has a couple of subcompact CUVs, but Zuchowski says HMA has deemed neither right for the U.S.

“There’s one in China we turned down because we think styling is really important in that segment and this was more conservatively styled,” he says, comparing the new ix25 there and also sold in India to a shrunken version of Hyundai’s midsize Santa Fe CUV.

“We didn’t think that was right for us, so we are willing to wait another year for a product that’s really dramatically styled,” he says, not specifying if another year means a year from 2015.

Hyundai has blamed its slowing U.S. sales growth in recent years on being a car-centric brand in a light-truck-dominant market.

Hyundai has just two light-truck models in the U.S., the Tucson and Santa Fe, a stark contrast to most competitors’ lineups and a product deficiency that comes at a time when more than half of all new vehicles sold in the U.S. are light trucks.