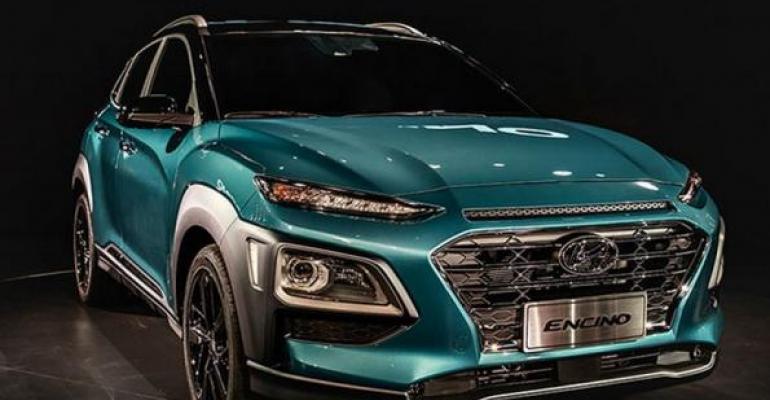 Hyundai hopes the Encino will give it a foothold in China&rsquo;s subcompact CUV market and help reverse a sharp drop in sales there. Korean products continue to be boycotted because of China&rsquo;s unhappiness with Korea&rsquo;s deployment of a long-range missile defense system.

Acknowledging that sales in China still are suffering, Hyundai launches the performance-oriented Encino version of its Kona subcompact CUV in China, aiming at style- and action-minded young buyers.

“I am excited to present the Encino to a new generation of Chinese customers; a generation who are practical, forward thinking, stylish, fearless in the face of challenges and have a fresh perspective on the world,” Chung Eui-sun, Hyundai Motor Group vice chairman, said at the April 10 sales launch in Shanghai.

“With Encino, Beijing Hyundai will share our values with this new generation of customers, offering individual lifestyle possibilities. Hyundai will become a true companion to its customers, building together for a better future and enhancing their everyday lives with a burst of energy and enthusiasm.”

The Encino has been slightly re-engineered to appear a tad lower than regular Kona models to appeal to youthful Chinese customers, Hyundai says. The difference in actual measurement is just 0.6 in. (15 mm) lower with a height of 61.0 ins. The 70.9-in. (1,800-mm) width is the same for both the Encino and Kona.

It is being produced in China at a Beijing plant of the Korean automaker’s Beijing Hyundai Motor joint venture with BAIC. A Hyundai spokesman declines to comment on a sales target for the Encino.

Hyundai hopes the Encino will give it a foothold in China’s still-hot subcompact CUV market and help it overcome a sharp drop in sales. Korean vehicles and other products continue to be boycott targets because of China’s unhappiness with South Korea’s deployment of a long-range missile defense system feared to spy on Chinese missile-launch activity.

Hyundai usually does not reveal sales figures for the China market. But the spokesman says January-February China sales were down 31.7% from the prior year, with 95,065 vehicles sold.

“While we expect market competition to get ever fiercer in China this year amid stagnant industrywide demand growth, Hyundai Motor is committed to strengthen our market presence with a diverse model lineup” including the Encino, the spokesman says.