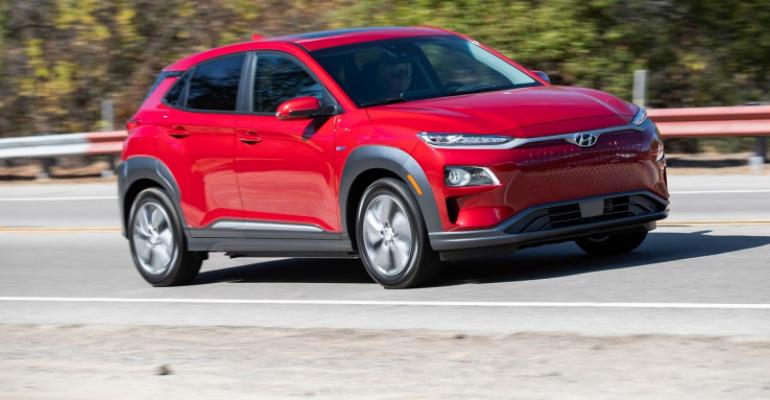 A lithium-ion battery shortage has put the hurt on sales of Hyundai’s BEVs, and the automaker now has a second battery supplier helping to meet demand.

SUPERIOR TWP, MI – While Hyundai’s newest electric vehicle is a hot commodity in Europe, officials in the U.S. have been assured by the parent company that Stateside demand can be met for the Kona Electric.

“Our top management simply told us, ‘We’re going to make sure you have enough.’ So we’re going to be all-in on the Kona EV,” Mike O’Brien, vice president-product, corporate and digital planning for Hyundai Motor America tells Wards here at the automaker’s tech center.

O’Brien recently traveled to Hyundai headquarters in Korea to sort out U.S. allocation for the 258-mile (415-km) range Kona Electric and says his South Korean bosses have vowed to ramp up production for the all-electric small CUV, but it’s unclear by how much.

A year ago, before volume production for the vehicle had even begun, Hyundai raised annual production rates for the Kona EV to 18,600 units, a 38% hike from a prior plan, reported Business Korea.

Wards Intelligence data shows only a scant 2% of roughly 150,000 total Konas built through the first eight months of this year were battery-electric vehicles – the remainder were the internal-combustion-engine model.

Hyundai reportedly received 20,000 orders for the Kona Electric in BEV hotspot Norway, but those have been converted to a sliver of that demand – 7,000 sold orders.

The South Korean automaker has been beset by shortages of lithium-ion batteries this year, and in the spring closed Canadian orders of the ’18 Ioniq Electric compact car because of the issue, said Green Car Reports.

Fellow Korean conglomerate LG Chem is the Li-ion supplier for the Kona, but O’Brien says a second, unnamed supplier has come online for the small CUV.

“Battery capacity is a bottleneck, but we’re working that out right now,” he says. “We’re very fortunate one of our sister companies is helping us with that. So that’s going to help us a lot in terms of being able to respond rapidly to the market.”

Hyundai has a group battery company, Enercell, although it supplies lead-acid batteries, not Li-ion. Hyundai does have other battery suppliers for production BEVs, namely CATL of China and SK Innovation of South Korea, but neither are group companies.

LG Chem in late August announced it would boost Li-ion cell manufacturing capacity to 90 GWh in 2020 from a prior forecast of 70 GWh after inking new deals over the summer with raw-material suppliers.

The Kona Electric is due to go on sale in California late this year, as the vast majority of BEVs in the U.S. are sold in the Golden State. Hyundai wants to do a quick rollout – within a couple of weeks after the start of California retail – to the 10 other states that follow California’s zero-emission-vehicle rules, but the automaker vows to sell the vehicle to any dealership in the U.S. with a sold order.

In California and the other ZEV states, Hyundai is training its dealers for the vehicle’s sale and requesting they install three chargers at their stores: one for use by the store’s sales staff, one for use by its service staff and the third for use by its customers who may need a charge while out and about.

In summer 2017, the California Hydrogen Business Council, on behalf of Hyundai, Honda and others with a vested interest in FCEVs, petitioned the California Air Resources Board to coerce Volkswagen to include hydrogen refueling stations in its subsidiary Electrify America’s business plans. Presently, and after two rounds of announced investments, EA remains solely focused on Level 2 and Level 3 chargers for plug-in vehicles.

“We’re hoping, whether it’s through Electrify America or through state initiatives, that we find more investment for hydrogen, because we’re one of many manufacturers who see a good future for it,” says O’Brien, noting a hydrogen fuel-cell stack makes more sense as an alternative powertrain than batteries for those living in apartments or multi-unit dwellings without easy access to outlets. Hydrogen fuel cells also are preferable to batteries in big, heavy vehicles that tow or haul, such as large CUVs or SUVs and commercial trucks.

“I think I had a cartoon made when I testified in Sacramento once of a high-rise in Manhattan with hundreds and hundreds of extension cords kind of hanging out of the building, just trying to make the point that not everybody has access to a wall plug.

There are 35 hydrogen refueling stations open in California, with another 29 in the development stages per the California Fuel Cell Partnership’s station map.

With the launch of the Kona and Nexo, Hyundai joins Honda as the only automakers selling all four alternative powertrains (BEV, FCEV, hybrid and plug-in hybrid) in U.S. vehicles. Like many OEMs, it is hedging its bets as fuel economy and emissions regulations toughen worldwide, leading to bans on gasoline- and diesel-engine vehicles in some European nations.

Of the possibility of relaxing U.S. CAFE requirements, as the Trump Admin. wants to do, O’Brien says Hyundai prefers to leave them as is, with some “flexibilities” desired to account for off-cycle improvements – things such as stop/start engine technology and active grille shutters – that don’t factor into window-sticker mpg numbers.

“Each manufacturer specializes in the vehicle types that they offer, and flexibilities allow us to tune the standard for the lineup that we offer, but also acknowledges the different kind of customers each manufacturer has,” he says.