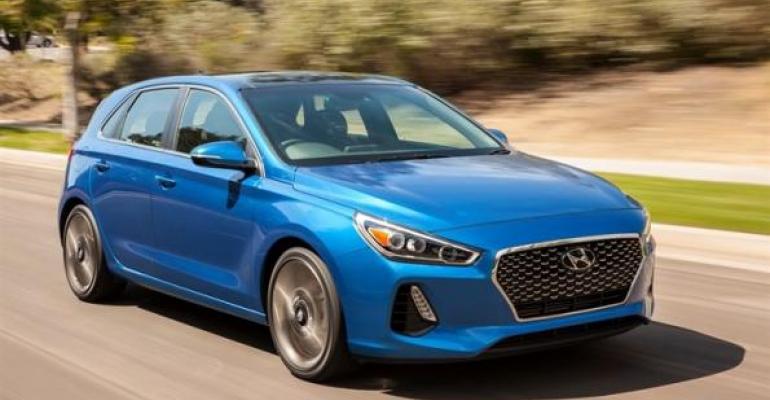 What could be a motivating factor, and what Hyundai is touting, is the utility plus athleticism a compact hatch provides over a B- or C-segment CUV.

While compact-car sales overall are down, deliveries of compact hatchbacks are expected to grow, thanks to a sudden burst of new entrants.

Hyundai hopes to ride this wave of popularity with the next-generation hatchback version of its Elantra C-car, the Elantra GT, and at the same time increase the GT’s take-rate.

“I would hope to, given the product offering,” Mike Evanoff, manager-product planning for small cars for Hyundai Motor America, says at a recent Ann Arbor, MI, media event. “Now we have two powertrains, which we didn’t have before.”

In its prior generation, the GT variant accounted for 10% of total Elantra sales, Evanoff says, but there is potential to sell more. Honda, for instance, wants 15% of Civic sales to be the new hatchback variant.

“There’s no real production limitation with this car, so it will sell at its natural sales pace,” Mike O’Brien, vice president-product, corporate and digital planning at HMA, told media last month at an Elantra event in La Jolla, CA.

Hyundai has U.S. inventory shortages of some of its models built in Korea, such as the Tucson CUV. The Elantra GT is built at Hyundai’s Ulsan, South Korea, plant vs. the Elantra sedan’s home of Montgomery, AL.

The 5-door compact sub-segment, once home to just a few entrants such as the Ford Focus and Volkswagen Golf, has witnessed a strong influx of new blood in recent years.

Late last year, Chevrolet and Honda both re-entered the group after long absences, releasing 5-door versions of their Cruze and Civic sedans.

In 2015, Toyota began retailing the former Scion iM as the Corolla iM, two years after it discontinued the Corolla Matrix in the U.S.

In trying to blunt the rush to CUVs, Hyundai is touting the utility plus athleticism a compact hatch provides over a B- or C-segment CUV.

“The popularity of CUVs is undeniable, but we also think there’s a viable option to that CUV, and that is the compact hatchback,” Evanoff says.

While there has been a migration of C-segment sedan owners to CUVs, he says the Elantra hatchback may keep some from making that switch.

Hyundai hopes the car’s styling gives its car an edge against the 5-door C-car competition. The Elantra GT is heavily similar to Hyundai’s i30 hatchback sold in Europe.

“It has a very European flavor. It has a tablet-style display…so there’ll be a number of customers that look at this product and (find) it just has the appearance of being more upscale and European” compared to compact sedans or competing hatchbacks, O’Brien says.

For ’18, Hyundai adds a new hot-hatch grade of the Elantra GT, the GT Sport, with a 201-hp 1.6L turbocharged 4-cyl. The engine can be mated to a 6-speed manual transmission or a 7-speed DCT, although Evanoff notes an optional technology package, with advanced safety systems such as adaptive cruise control, is compatible only with the DCT.

The base GT model has a 161-hp 2.0L with direct injection, as well as a torsion-beam rear suspension vs. the GT Sport’s multilink rear, and can be mated to either a 6MT or a 6-speed automatic.

“These are customers that are going to grow with your brand. They’re the kind of customers we all want to get into our products,” he says.

The Elantra GT, on sale now, begins at $19,350 for a 2.0L/6MT model and reaches $28,200 for the GT Sport with the turbo engine/DCT combination as well as the tech package. Destination and handling adds another $885.