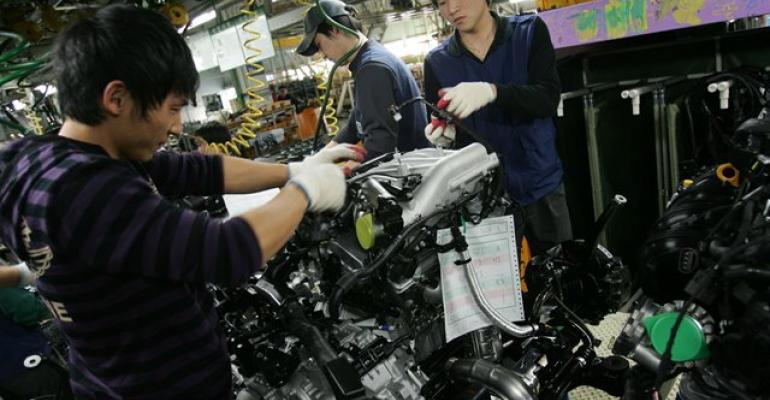 The Hyundai workers&rsquo; union says management has failed to make an offer that improves the terms contained in a tentative wage package that was reached Aug. 24, but was rejected by 78% of the workers.&nbsp;

Hyundai experiences its first full-day labor strike in 12 years Monday, when workers belonging to the Hyundai Motor Branch of the Korean Metal Workers Union failed to show up for either the morning or afternoon shifts.

The fullscale walkout shut down all assembly operations for 16 hours at Hyundai’s plant in Asan, its five plants in the Ulsan industrial complex and its commercial-vehicle center in Jeonju. There was no production for the entire day.

The action was taken after union and management bargainers failed to make any progress in their 16th negotiating session, held last Friday.

The union has ordered its members to continue the action with partial strikes of three hours on each shift for the remainder of the week, except on any day in which the two sides may hold another negotiating session. A date for the next meeting has not been set.

A union spokesman says the partial strikes may continue next week unless progress is made in talks between the sides.

According to sources at the affiliated Kia branch of the KMWU, its members also will strike for three hours on both the morning and afternoon shifts this week because no progress has been made in negotiations at Kia, either.

Both Kia management and its union are observing a news blackout and have agreed to not discuss any details of their negotiations.

However, Korea’s Ministry of Trade, Industry and Energy issued a report stating that in August alone partial strikes at Kia cost the automaker 68 hours in lost production.

The strikes were held on 14 separate days and caused production losses of 15,000 vehicles, a spokesman told WardsAuto earlier.

The Hyundai workers’ union says management has failed to make an offer that improves the terms contained in a tentative wage package that was reached Aug. 24, but was rejected by 78% of the workers.

“Management needs to make new and better proposals that contain substance,” the union says in a statement. It says union members were unhappy with the tentative deal reached last month because it offered the workers less of a raise than they received last year.

The union also had agreed to a management proposal to cut worker pay 10% at age 59 and again at age 60, which some factions in the union have strongly objected to.

Hyundai has released a statement pledging to continue working with the union to settle the wage matter as soon as possible. The statement also notes the work stoppage not only was hurting the automaker and its unionized workers but also hundreds of suppliers and their workers at all three production locations.

A Hyundai spokesman says that as of Friday, strikes to date had caused production losses of more than 2 trillion won ($1.8 billion).

Korea’s Minister of Trade, Industry and Energy Joo Hyung-hwan issued a statement Monday urging both parties to settle their differences and end the strikes.

He refers only on Hyundai and does not mention the impact of the ongoing partial strikes at Kia.

Joo says the Hyundai strike could damage the country’s efforts to strengthen its overall export growth. Exports of all products rose more than 3% in value in August, but poor automotive exports will impede the growth.

“South Korea has been experiencing contracted global demand and other downside pressures. The strike at Hyundai Motor will throw a cold blanket over the slight recovery pace of the country’s exports,” Joo says.

Korean Output Surpassed by India, Could Fall Behind Mexico

Joo also notes for the first time South Korea’s cumulative automotive production has been eclipsed by the output of automakers in India.

He cites an analysis released Sunday by the Korea Automobile Manufacturers Assn. saying South Korea had lost its fourth-place production ranking to India, and now stands in fifth place after China, the U.S., Japan, Germany and India.

India is expected to continue to outpace Korea because of stable sales in its home market and improved export sales, compared with Korea’s deeply declining domestic sales.

Analysts note that unless domestic production picks up, South Korea production could slip to seventh place, below that of Mexico.

Combined exports by Korea’s five automakers in August were down 18.6% year-over-year with 142,987 vehicles shipped. For the first eight months of 2016 their combined exports totaled 1.7 million vehicles, a decline of 14.8%.