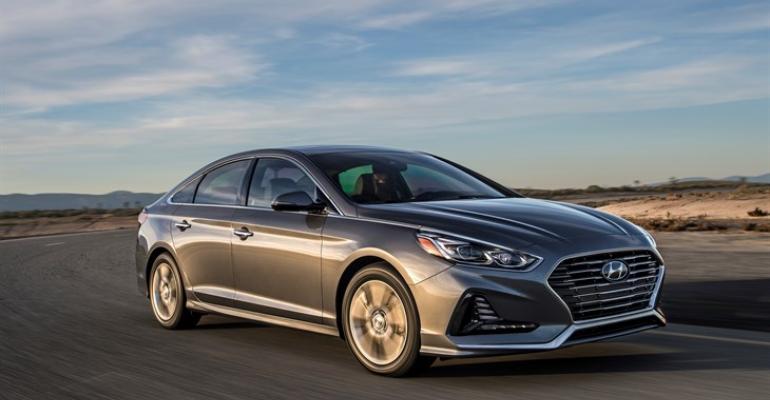 Production data shows Sonata builds were down 13.9% in the U.S. through May.

LA JOLLA, CA – With the refreshed ’18 Sonata launching in a slumping midsize car segment, Hyundai says its goal is to “reinvigorate” its sales momentum with the model, not necessarily grow sales.

“If we can maintain our share, I think, is one of the goals we have with this refresh,” John Shon, Hyundai Motor America’s product manager for the Sonata, tells media here at an ’18 Sonata preview.

Sonata sales have fallen 26.9% this year. The car’s 76,315 deliveries through June gave it a 8.42% share of WardsAuto’s Lower Middle group where most midsize sedans live. Five competitors posted higher shares, led by the Toyota Camry with 19.51%.

Hyundai has done what it deems a major refresh of the eighth-generation car, giving it an 8-speed automatic transmission in upper grades and perhaps most importantly, changing its appearance to harken back to the uber-successful seventh-gen “Fluidic Sculpture”-era Sonata. However, it recognizes it is fighting an uphill battle as the trend toward light trucks, particularly CUVs, is strong in the U.S.

Hyundai blames the year-to-date loss entirely on a reduction in fleet sales, particularly of the Sonata and compact Elantra cars, citing a desire to not capitulate to rental-car companies’ requests for low deals.

A senior Hyundai executive in Korea last month said the brand in the U.S in 2016 increased its reliance on fleet sales, citing a 25% fleet ratio at Hyundai vs. an 18% industry-average fleet mix per U.S. brands.

HMA officials say they are trying to lessen their reliance on fleet sales this year as a means of finding a place to put high numbers of cars in inventory. Fleet also can harm residual values as daily rental firms buy in bulk, usually meaning a lower purchase price which then depresses used-car prices when the vehicles are sold.

“When we see unwillingness (by rental-car firms) to pay the prices that we’re looking for for our vehicles, then it is the time for us to reconsider the volumes that we’re doing,” Mike O’Brien, vice president-product, corporate and digital planning for HMA, tells WardsAuto in an interview.

When asked if Hyundai is working to cut car production, O’Brien says he has nothing to announce. But inventory and production data suggest it is somewhat.

Hyundai had a 70 days’ supply of both the domestically built Sonata and the imported (hybrid, plug-in hybrid) Sonata in June, up from 51 in June 2016 but below the industry average of 75 days for cars at the end of last month.

Sonata builds were down 13.9% in the U.S. through May, the most recently available production data.

“We’ll be looking at doing more of those kinds of plant arrangements in the future, where we can maintain a similar plant volume, which keeps the plant running most efficiently, but allows for changes in market conditions more quickly,” O’Brien says.

When asked if there is a standoff of sorts going on between Hyundai and its rental-car customers, O’Brien says he has “not heard of any debate going on,” but says eventually they will need to replenish their models.

“I think there’s a consistent ebb-and-flow, back-and-forth of how long fleet companies maintain their fleets before they turn them and how frequently they wish to turn them. They’re obviously working their side and we work our side. I don’t know if there’s conflict of any kind."

O'Brien says a Hyundai-brand goal is to raise total retail sales in the second-half of the year, to offset the first-half fleet-precipitated decline. While its car sales are slumping, Hyundai's Tucson small CUV is in high demand, posting a 21.2% first-half gain.