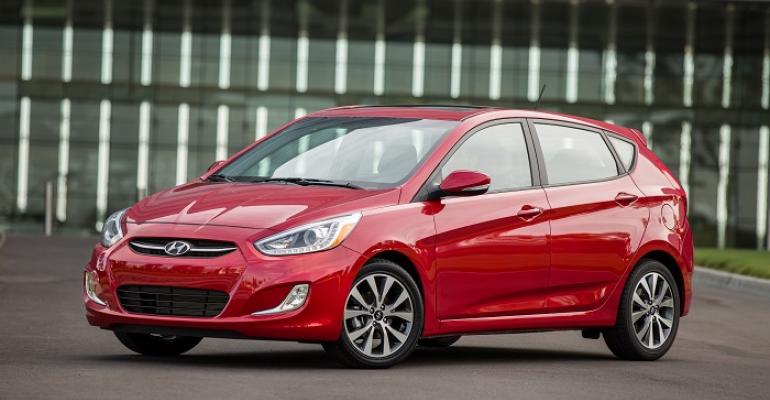 A Kia Soul-like box, but smaller, is being looked at to capture the attention of millennials. The U.S. sales arm of the Korean automaker also promises an imminent announcement on a production Santa Cruz.

IMPERIAL BEACH, CA – While already planning a B-segment CUV for the U.S., Hyundai now is exploring the possibility of going even smaller as it works to boost its light-truck market share.

“We’re looking at something in the A-segment that might look like a (Kia) Soul but (that is) a little bit smaller than that,” Dave Zuchowski, CEO-Hyundai Motor America, tells media here at a ’17 Elantra sedan preview.

Zuchowski tells WardsAuto the vehicle is being considered as a possible replacement for the Hyundai Accent 5-door B-car.

“The thought is right now we have an Accent sedan and an Accent hatch and maybe you just (redesign) the Accent sedan, and instead of the hatch you (substitute) something like a Soul-type of vehicle, a funky type of vehicle (that doesn’t have) a traditional CUV look but is not a hatch either,” he says.

As an A-segment model is in the early stages of planning he isn’t able to say whether the automaker’s A-car platform, underpinning the i10 minicar overseas, will be its foundation.

Some automakers, namely Nissan, use a flexible B platform to underpin both A- and B-segment models. The Soul, from Hyundai sister brand Kia, rides on Hyundai/Kia’s B platform, also used for the Accent and Kia Rio.

With A- and B-segment CUVs, as well as previously announced BMW X3 and X5 fighters that will appear in the newly formed Genesis luxury brand’s lineup, Hyundai could go from just three CUVs in the U.S. today (Tucson, Santa Fe, Santa Fe Sport) to seven.

“We’re out of whack and we’re swimming upstream,” Zuchowski says of Hyundai’s continuing problem of being a car-heavy brand in a light-truck-centric U.S. market.

Last year, light trucks made up just 23% of Hyundai’s U.S. sales, second lowest only to Volkswagen (10%), he says.

Another future light-truck entrant for Hyundai likely will be a production version of the Santa Cruz concept small unibody pickup shown at the 2015 North American International Auto Show in Detroit.

The concept was based on Hyundai’s Tucson compact CUV platform.

Zuchowski says HMA has done its due diligence on a production model and feels it has a strong business case.

“There’s a lot of people that don’t think there’s a market there,” he says. “This has been pushed completely by the U.S. We’ve done our own research and contracted with independent third-party research, and we’ve separately come up with volumes that would more than justify this.”

Hyundai’s internal research has shown potential U.S. annual volume of 50,000 units, while third-party research is a bit more optimistic at 70,000.

Zuchowski bristles when asked why this vehicle will work when similar predecessors, such as the Subaru Baja, didn’t.

“(The) Subaru was a chopped off sedan. You have to do it right,” he says, rattling off a list of must-have attributes needed for the Santa Cruz including seating for five, a functional bed, an available tonneau cover, good fuel economy and a price starting in the mid $20,000 range.

Zuchowski says HMA has had to remind Hyundai’s Korean management to think of the Santa Cruz not as a pickup but rather an open-bed utility truck.

“It will not be on job sites. That’s not what we’re looking for.”

While a manufacturing location or a powertrain hasn’t been identified, Hyundai has put engineers to work to figure out what he sees as one of the most important aspects of a production Santa Cruz, the creative bed functions.

Meanwhile, Hyundai continues development of a B-segment CUV for the U.S. that is more stylish and contented than the Creta model introduced overseas last year.

Zuchowski calls Hyundai’s forthcoming U.S. B-CUV, slated to arrive by 2020, a “fairly dramatically styled vehicle” with Nissan Juke-like appeal, something that will grab the attention of the 80-million-strong millennial market.

Hyundai is closely watching existing B-CUVs to see what models, if any, they are cannibalizing. “You obviously want it to be incremental and not substitutive,” he says of the vehicle type.

Speaking of models that are substitutive, Zuchowski says Hyundai no longer will offer a coupe version of its Elantra compact car, as it found buyers were purchasing it in place of an Elantra sedan only when the 4-door wasn’t available in the color they wanted.

The next-generation ’17 Elantra sedan is on sale now at U.S. Hyundai dealers.

Other variants of the car, including an Eco grade model with a new 1.4L turbocharged and direct-injected 4-cyl. mated to a 7-speed DCT, as well as a roughly 200-hp Elantra Sport grade, are due in the second quarter and fourth quarter, respectively.

A replacement for the Elantra GT hatchback is due in 2017.