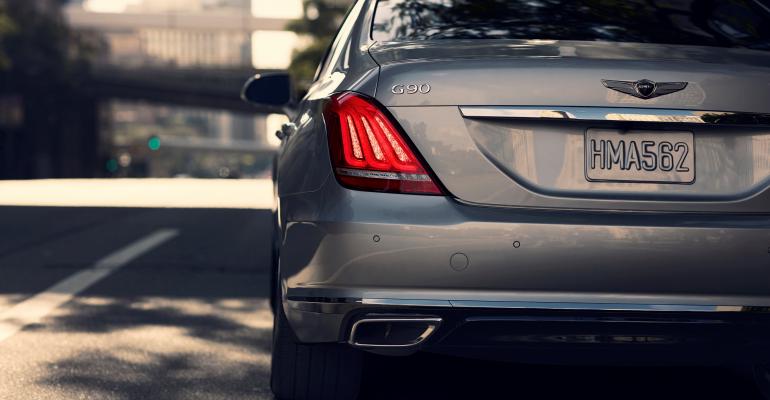 The union&rsquo;s OK to doubling output to 32,000 units per year is a labor-management breakthrough; analysts and company officials believe it provides a new production flexibility Hyundai has long lacked.

The Genesis G90 that made its world debut at the North American International Auto Show in Detroit is doing wonders for management-union relationships at Hyundai’s plant 5 in Ulsan, South Korea, where the new luxury marque is assembled.

Gearing up for release of the Genesis EQ900, as the model is called in Korea, management had set a production target at the plant of 16,000 vehicles, which in the production-planning stage seemed optimistic and a tad risky.

However, even before its official domestic Korean sales launch on Dec. 9 the EQ900 had racked up 9,700 preorders.

By mid-January it had a backlog of signed domestic sales orders for 13,000 vehicles. They are on back order and with the 16,000-a-year production bogey, the wait time runs as high as 10 months.

The Hyundai branch of the Korean Metal Workers Union, which only days ago signed a new wage agreement with the automaker, sat down with management in Ulsan and reviewed the production-planning necessities. With North American sales due to launch soon it was obvious the plant could not meet demand unless the production schedule was greatly increased.

The union agreed to a doubling of output to 32,000 units per year, with consideration for continuously hiking the number if demand necessitates it.

This is a labor-management breakthrough; the new schedule requires personnel shuffling, and modifying schedules and personnel for other models in Ulsan’s other four plants.

In the past workers vehemently have opposed bringing additional workers into a plant, or transferring a portion of the production to another plant, because it reduced the amount of premium overtime work available to them and impacted their personal income.

Analysts and management believe this breakthrough illustrates a new production flexibility that Hyundai has long lacked, and bodes well for the automaker’s global operations.

In the U.S., Hyundai Motor America CEO Dave Zuchowski told reporters at NAIAS about half of Hyundai’s 830 dealers will sell the G90 version of the new Genesis. Those already have received special training and added showroom and service appointments to fully support the unfolding Genesis lineup.

He predicted all Genesis models, including the G90, will be selling at a rate of 90,000 vehicles annually within the next five years.

Genesis output spillover from Plant 5 in Ulsan to other plants within the huge Hyundai complex as that level of production, plus builds for domestic, European and other markets, would more than outstrip its capacity.