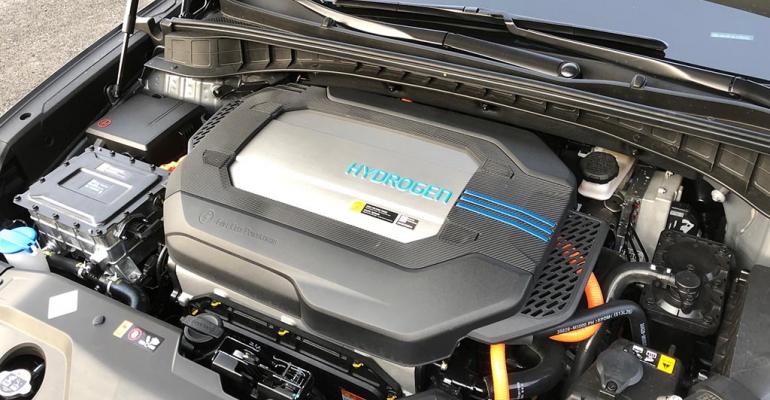 Initial development will focus on the North American commercial-vehicle market, including working with North American OEMs on the integration of these systems into their vehicles.

Hyundai and Cummins sign a memorandum of understanding to jointly evaluate opportunities to develop and commercialize electric and fuel-cell powertrains.

These new powertrains are expected to be developed by combining Hyundai’s fuel-cell systems with Cummins’ electric powertrain, battery and control technologies, the companies say in a news release. Initial development will focus on the North American commercial-vehicle market, including working with North American OEMs on the integration of these systems into their vehicles.

The companies also will examine ways they can work together to develop next-generation fuel-cell systems, and each has committed to assign a team of individuals to investigate and pursue other areas of collaboration.

The partnership will allow Hyundai to increase its presence in the North American CV market, and Cummins to enhance its electrified power product portfolio by adding Hyundai’s advanced fuel-cell technologies.

The agreement comes as demand for fuel-cell technology increases, the companies say. Hydrogen can be produced from renewable sources, stored economically and deployed for a number of industrial and residential energy-generation applications; as well as used in fuel-cell vehicles.

Hyundai opened the world’s first commercial production facility for hydrogen-fuel-cell vehicles in 2013, and released the world’s first commercialized hydrogen-powered vehicle, the Tucson Fuel Cell, in 2015. The Nexo, Hyundai’s second-generation fuel-cell electric vehicle with a range of over 378 miles (610 km), is a CUV that emits clean water vapor and even purifies the air while driving.

Hyundai’s system comprises fuel-cell stacks that convert stored hydrogen into electricity as well as other sub-components for thermal management and air supply, among other integral processes for power generation.

Cummins in 2018 launched its Electrified Power business segment, which designs and manufactures fully electric and hybrid powertrain systems along with components and subsystems to serve commercial markets as they adopt electrification. To date, the business has introduced complete electrified powertrain solutions in six markets across seven applications.