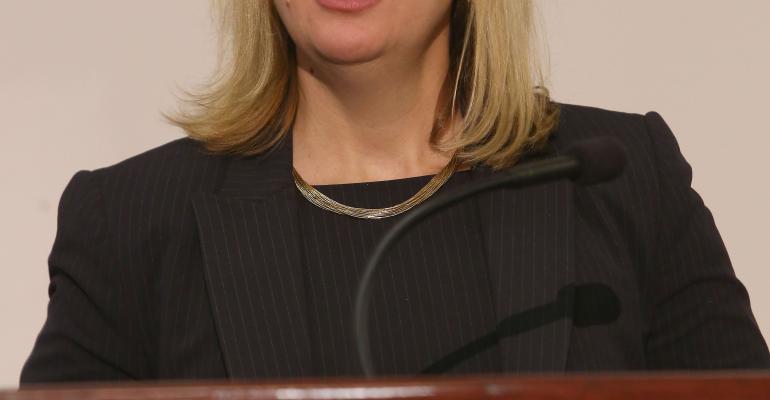 Safety is No.1 on the minds of consumers when it comes to advanced-vehicle technology, say panelists discussing the future of HMI (human-machine interface) systems at the 2015 WardsAuto Interiors Conference, and widespread application of future HUD devices will play into that.

“(And) there will be a significant explosion in HUD (applications),” she adds. “We expect it to grow significantly over the next five years, particularly in the U.S. where current penetration is low.”

About half the coming applications, Wahnschaff says, will be combination HUDs that project images on a small screen that pops up in front of the windshield. It’s similar to the system used in the Mazda6, one of this year’s Ward’s 10 Best Interiors winners. The other half will be more expensive units that project directly onto the windshield.

Future Continental HUD systems will be brighter and feature more color. Augmented reality will be used to project route guidance information and assure the driver there’s enough stopping distance to the vehicle in front when using the adaptive cruise control, among other things, Wahnschaff says.

Showing drivers how safety systems are operating and assuring them they are functioning correctly will be a critical component toward getting car buyers to accept autonomous vehicles, panelists agree.

A recent J.D. Power survey of what technology most consumers want in their next car or truck shows safety features at the top of the list, says Kristin Kolodge, executive director-Driver Interaction and HMI for the research company.

Topping the rankings are features such as blindspot detection, night vision, collision avoidance and backup cameras, she says. “Eighty-one percent want some form of collision-avoidance technology on their next vehicle.”

Surprisingly, Gen Y, those born between 1980 and 1996 and most associated with social media and smartphone apps, are the age group most interested in safety technology.

“When you think Gen Y you think connectivity, but it’s interesting how high the (safety desire) is,” Kolodge says.

Not so surprising is that younger age groups tend to be most interested in fully autonomous vehicles, while older consumers are more wary of the technology’s reliability and the potential liability implications should something go wrong.

With safety high on the want list, automakers and suppliers are beginning to turn the HMI focus away from gee-whiz features and toward providing information and functions only when needed and in an intuitive way that’s easy to access – a huge design challenge, panelists say.

Continental has identified six user personas, each with different HMI wants and needs. And individuals can shift personas depending on what day it is or the mood they’re in.

“Some want lots of information, some just want to be sure they are safe,” she says. “So you need an HMI system that is tailorable to the driver.”

Usability will be paramount, Kolodge agrees, adding design issues are surfacing as the most frequent quality concern for consumers in J.D. Power car-buying surveys. “If you don’t have (usability), the system is never going to get off the ground.”

The increasing dominance of HMI features will transform the interior completely, predicts Jay Hotchkiss, research and innovation engineer for Faurecia.

“This is where things get interesting,” he says, pointing to plastic parts that will have to take on new roles as flat-panel display screens, be transformed into new shapes and offer tactile controls.

As autonomous vehicles emerge, it will put new demands on vehicle lighting and create the need for rear-seat controls and display screens, Hotchkiss adds, pointing to the Mercedes-Benz Future in Motion concept vehicle that features augmented-reality display screens mounted in rear inner-door panels.

As for the future of gesture technology, where a driver can control accessories with a sweep of the hands, panelists are not too encouraging. Hotchkiss says it will be difficult to tell when an occupant is trying to access the infotainment system or simply talking with his hands.