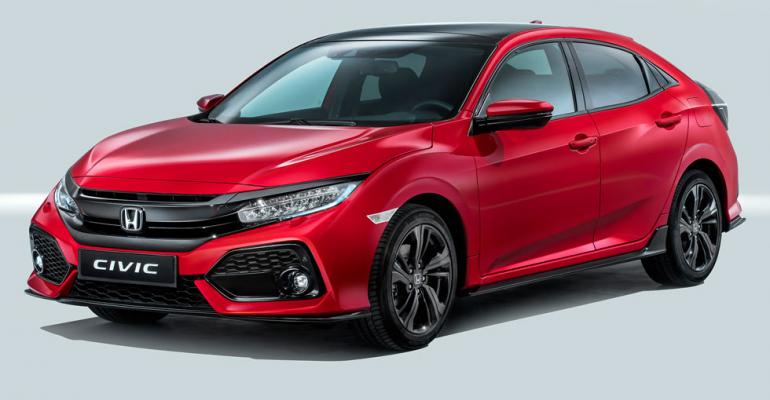 Honda U.K. Proud to Be on Par With Premium Exporters

Honda believes the time is right for the 5-door Civic to conquest U.S. consumers whose awareness of the brand is riding high and those seeking a vehicle featuring the more flexible practicality of a fullsize hatchback.

PARIS – Honda’s U.K. factory workers are taking pride in having joined the ranks of premium British-built brands exporting cars to the U.S., according to senior staff at the Swindon plant.

To the list including Jaguar Land Rover, Bentley, Rolls-Royce, Aston Martin and Mini, add the 5-door Honda Civic hatchback built from scratch at Honda’s factory in the Wiltshire region.

Speaking to WardsAuto at this year’s Paris auto show, the factory’s head of cars, Phil Webb, says Honda’s decision to ship its product Stateside has been a huge morale-booster for factory workers, referred to by the automaker as associates.

“The associates are very proud to actually see a car go out of the factory door, get put on a transporter, sent down to the docks to be put on a ship to go to America,” he says. “This makes a huge statement about their work.

“It’s an illustration of how much confidence Honda has in the Swindon factory. Sales started in September and the initial feedback is that it has been very positively received.”

Webb believes the time is right for the 5-door to conquest U.S. consumers whose awareness of the brand is riding high and those seeking a vehicle with the flexible practicality of a fullsize hatchback.

“We believe the hatchback will find a good market in the U.S., especially because the consumers are aware of the car, having seen the 4-door sedan winning the North American Car of the Year last year. We see the 5-door being a step up from the sedan towards the practicality of a station wagon.

“The market in this segment is potentially huge, especially as we’ve seen the sale of Honda grow rapidly in the U.S. recently.”

Webb isn’t worried about taking sales away from the existing U.S.-built sedan.

“Our sales strategy is very clearly aimed at bringing in conquest sales in this market and that’s very much the case in Europe as well. In terms of production, we’re looking to build up to 160,000 Civics in the next 18 months currently running at 800 cars a day from the Swindon factory.”

He says the move is part of Honda’s global plan to create hubs for different markets and models around the world, a strategy that has seen the U.K. plant chosen as the Civic hatchback’s hub in Europe.

“The statement Honda has made affects various factories around the world and it will be happening in the next few years where individual factories will become the hub for a particular model for their area,” Webb says.

“An example is that we currently manufacture the European HR-V in Mexico and that will be transferred over the years to come to Japan, which will allow Mexico to concentrate on units that are sold in that part of the world. Likewise CR-V was going to be manufactured in Canada but now the strategy will see that built in Japan too.”

No Panic Over Brexit

Meanwhile, Honda U.K.’s Managing Director, Phil Crossman, says the Swindon factory is not making contingency plans over any trade threats to U.K. production that may stem from the U.K.’s so-called Brexit from the European Union’s single-market agreement.

“From our point of view it’s very much wait-and-see and there’s still a lot going on in Europe with elections in France and Germany coming up that could have an effect on the European market as a whole,” Crossman tells WardsAuto.

“So nobody can give a manufacturer a clear idea of what is going to happen.”

“The advantage of being a global company is that somewhere in the world there will be a hot market,” the Honda executive says. “We’ve never chased the market and we’re sensible in our approach. For instance, when the U.K. market was racing away, we had our production plan, we had our business plan and we made sure our dealers were aligned with that.

“So we carry on doing that volume and it’s the same in a declining market, so we are a bit more future proof (of that advantage) now.”

He says the U.K. operation has a vital edge in its long-established dealership network whose diversified business plans can cope with market swings.

“Our dealers are set up that they can survive quite comfortably even if the market dipped quite a bit,” Crossman says. “That’s because we’re very strong in used cars, very strong in aftersales and customer retention is also very high. So I don’t think we’ll suffer from these huge swings.

“We are fortunate to have that very robust dealer network, with many of them long-established businesses with plenty of customer loyalty and are very well funded.”

Webb adds the retail network is so healthy it has been able to cope with sales swings of up to 60% during and after the 2008 financial crisis.

“In the past our dealer network has done over 100,000 units annually (and) it has also done just 40,000 units,” he says. “Yet we still have a very successful network and that tells a story of what they can handle in the new-car market.”