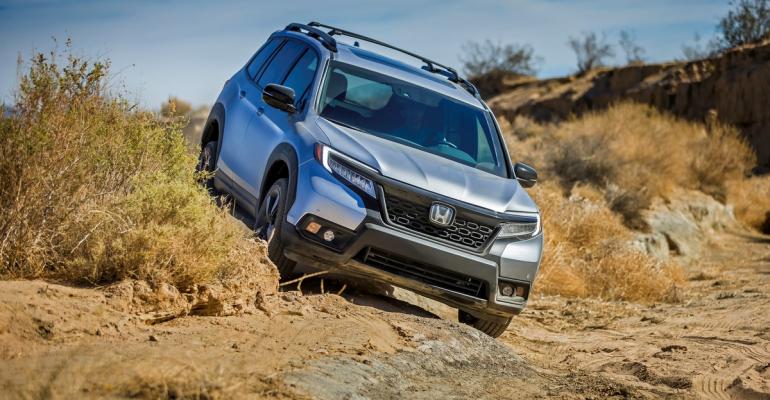 Since the discontinuation of the Crosstour in 2015, Honda has been without a dedicated 2-row midsize CUV in the U.S. It says a lack of a model in the segment shorted it some customers.

MOAB, UT – The arrival of the new 2-row Passport CUV next month should help Honda stop some outflow of buyers, the automaker says.

“It has been years since we have had a product in the midsize 5-passenger SUV segment,” Lara Harrington, chief engineer for the new Passport, says at a media preview for the vehicle here. “We were losing customers.”

In 2009 Honda debuted the Crosstour midsize, 2-row CUV, but the vehicle was discontinued in 2015 due to slow sales.

In an interview during the North American International Auto Show in Detroit earlier this month, a different Honda official told Wards about 35,000 customers left the Honda brand in 2017 to buy a midsize 5-passenger utility vehicle.

In developing the new Passport, Honda benchmarked the sales and/or image leaders in both the midsize CUV (Ford Edge, Nissan Murano) and midsize SUV (Jeep Grand Cherokee, Toyota 4Runner) groups with a goal of creating a model that straddles both.

‘We looked at the Edge and Murano – they were clearly a focus – (and) we looked at the 4Runner and Grand Cherokee and we thought that those definitely had more of an off-road slant, (so) our target was to fit right there in the middle,” Harrington says of a vehicle that is off-road capable, but also the type of vehicle you can commute to work or take your boss to lunch in.

While the 4Runner and Grand Cherokee are body-on-frame, the Passport, like all Honda light-truck offerings, has a unibody platform and is closely related to the Pilot, which for the ’19 model year has gone exclusively to three rows of seating.

Harrington says the Pilot and Passport, as well as Honda’s Ridgeline midsize pickup, share much underbody structure as all are based on the automaker’s global light-truck platform. However, her engineering team “worked really hard to make the Passport very distinct from the Pilot. We are adventure-oriented (and the) Pilot is family-oriented.”

Areas of differentiation include the Passport’s blacked-out front end, 6 ins. (152 mm) less overall length for the Passport compared with the Pilot, beefier roof racks for the Passport, higher ground clearance for off-roading, a wider track and wider tires, a steeper rear-window angle, quicker steering ratio, shorter brake-pedal travel and a suspension tuned for both on- and off-road driving.

The Passport also gets standard 20-in. wheels and tires across all grade levels. Together with the blacked-out front end, the wheels help give the CUV some urban character, Harrington says.

Unique in its segment is underfloor storage space, Honda says.

“One of the first things we did is we lined up the Murano, the Edge, the Jeep Grand Cherokee and the 4Runner and we opened up the cargo floors,” Harrington says, noting there wasn’t much under each beyond a spare tire.

“We saw this as a huge opportunity to give us an advantage, so we repackaged the location of the spare and then we added quite a bit of hidden cargo space,” she says.

A folding floor cover reveals a wide cargo area, running roughly from left wheel well to right wheel well, near the tailgate opening. Raising the cover reveals a smaller spot adjacent to the spare tire, which has been pushed forward as there is no third row in the CUV.

The Passport uses Honda’s 280-hp 3.5L V-6 from the Pilot. The engine is mated to a what it is calling a smoother-shifting second-generation of ZF’s 9-speed automatic, although a Honda spokesman notes the supplier has continuously tinkered with the transmission that has been the subject of consumer and reviewer complaints for its jerky shifts.

The new CUV has as optional Honda’s torque-vectoring AWD, which transfers engine torque up to 70% to the rear, and then up to 100% side-to-side between rear tires.

It works in concert with Honda’s Intelligent Traction Management system, which has four modes (normal, snow, mud, sand) that change throttle, shift map, torque bias, vectoring and stability-system parameters depending on driving conditions. For instance, there is a little less throttle in snow mode and torque is biased to the rear for smoother starts and more launch power on snowy roads.

Inside, the Passport gets Honda’s new Display Audio touchscreen and infotainment system that debuted in the Odyssey minivan two years ago, as well as standard Apple CarPlay and Android Auto compatibility.

Honda’s Sensing suite of advanced driver-assist safety technologies is standard on all trims.

The Passport is officially on sale Feb. 4 in the U.S. and comes in Sport, EX-L, Touring and Elite trim levels.

The EX-L, which Honda expects to account for about half of all Passport sales, is $39,355 including AWD and a $1,045 destination and handling charge. Honda calculates that is roughly $3,000-$7,000 less than comparably equipped competitors, including the new Chevy Blazer.

The automaker is mum on sales potential for the Passport, but LMC-Wards Intelligence forecasts Honda will sell from 50,000-70,000 Passports in each of the next five years in the U.S. The Passport went into production Dec. 6 at Honda’s assembly plant in Lincoln, AL.

Of the four competitors Honda cites as benchmarks for the Passport, the Jeep Grand Cherokee is the highest-volume model, with 224,908 sales in 2018, Wards Intelligence data shows.