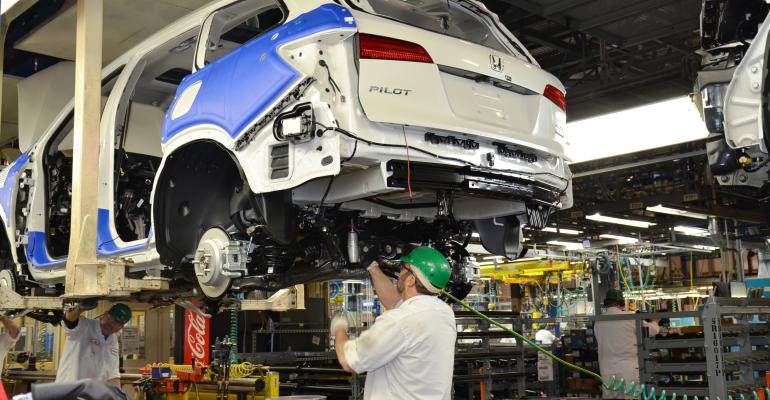 <p><strong>Lincoln has straight-time capacity for 120,000 Pilots, but Honda expects to exceed that mark.</strong></p>
Industry News

The automaker is making a big play in trucks with the new Pilot, just-launched HR-V small CUV and a planned return next year of the Ridgeline pickup. But how much that will shift its mix away from cars remains to be seen, a top executive says.

Job One of the new Pilot CUV in Lincoln, AL, today represents the latest chip in American Honda’s growing bet on the U.S. light-truck market.

So far it looks like the Japan-based automaker is set to cash in, with this year’s planned production of the midsize model already said to be fully allocated to Honda’s U.S. dealers.

A strong finish for the previous-gen Pilot’s run, which saw U.S. sales jump 56.2% this year through April, has cleared inventory off dealer lots, so Honda is looking to ramp up output of the new model as quickly as possible, American Honda Executive Vice President John Mendel says in a conference call with reporters ahead of today’s Job One ceremony.

“I hope demand outstrips supply, no matter how many we build,” he says. “(But) we’ll stop building the old one and start building the new one, and we think that will come pretty seamlessly.”

Pilot production at the Lincoln plant, the sole global source for the vehicle, is targeted at 120,000 units annually once output is in full swing, Mendel says, characterizing that as a conservative working number that coincides with expected U.S. sales volumes.

“(But) I think you’ll see us go to 120,000 and beyond, based on demand from the consumer,” he adds, saying it shouldn’t be difficult to do at the Lincoln plant. “Alabama is very seasoned to trucks; it’s not like (we’re building) a new vehicle in a new plant.”

The launch of the third-gen Pilot, which is designed to compete better at the heart of the Middle CUV segment, follows up on the rollout of the new Mexican-built HR-V small CUV, which arrived at U.S. dealers in the past week.

“(The HR-V) is a white-space opportunity for us,” Mendel says, saying the turn rate on the model in its early days in U.S. showrooms is running extremely fast. “(Dealers say) it’s five vehicles in, five vehicles out.

“We think that’s a segment Honda can really define and grow.”

Coupled with still-hot demand for the CR-V CUV – that model posted record April sales (29,452 units) and topped the 100,000 mark in the first four months of the year for the first time, Mendel sees a decided swing in mix toward trucks under way at Honda, but he is unsure just how far that will go. Currently, trucks account for about 49% of Honda’s U.S. sales.

“We have some upside potential (with trucks) as we bring this new vehicle on line, but I can’t give you (a mix forecast),” he says. “(Production) flexibility is key for us.”

Honda has North American capacity for 1.9 million vehicles, Mendel adds. “(And) we have some flexibility in there. (The mix will depend) on how much the car market and truck market grow.”

Adding to the truck play will be a revival of the Ridgeline pickup, which will see a second-generation model debut in the U.S. next year. Mendel confirms the truck once again will be built exclusively at the Lincoln plant.

Production at the Alabama facility reached a record 363,419 vehicles last year, up 9.0% from 2013, according to WardsAuto data.

The automaker has poured $508 million into the plant to improve flexibility and boost capacity. The outlay includes $71 million for a new engine line, which produces 1,500 V-6s daily, plus a third metal-stamping operation.

In total, Honda has invested more than $2 billion at Lincoln, which has annual capacity for 340,000 vehicles and engines. It is the exclusive worldwide source for the Honda Odyssey minivan and Acura MDX CUV, as well as the Pilot.