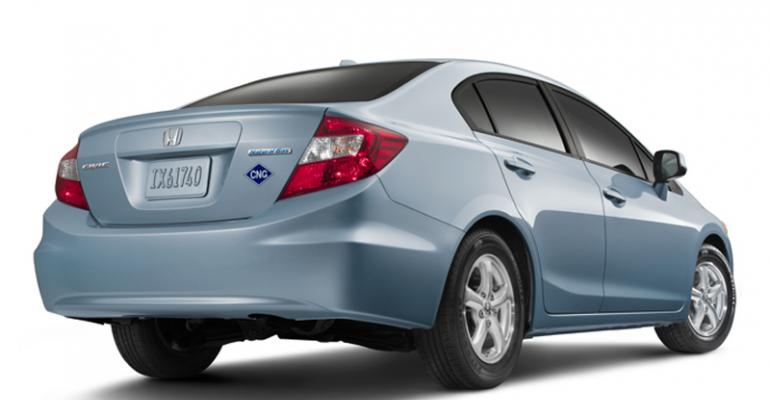 The major obstacle to using CNG is the relative scarcity of service stations where the fuel can be obtained. There now are 1,050 CNG refueling stations in the U.S., and the total is climbing 10% annually.

Coming off its best-ever year for sales of its compressed-natural gas-fueled Civic, Honda forecasts volume will be relatively stable or slightly better in 2013.

In 2012, Honda sold 1,907 CNG Civics built at the auto maker’s 4-door-vehicle plant in Indiana. That’s about double the volume Honda delivered in the previous three years, a spokesman says.

The CNG Civic is available in only 36 states, and only 199 of Honda’s 1,038 franchised dealers are certified to sell the vehicle. However, that’s the highest number of dealers the auto maker has qualified to sell the model. The CNG Civic is priced at $26,465, about $5,650 more than the gasoline-fueled Civic EX sedan, which it most closely resembles in equipment.

Also, in some states drivers of natural-gas-fueled vehicles can drive in high-occupancy lanes without the need to carry passengers. Natural gas currently costs less than gasoline, with little difference in fuel economy between the two fuels; the CNG Civic is rated at 1 mpg (0.4 km/L) less than the gasoline-powered model.

In 2012, about one-third of CNG Civics were purchased for fleets. In the 2011 model year, conventional retail sales accounted for 90% of volume, the spokesman says.

The major obstacle to using CNG is the relative scarcity of service stations where the fuel can be obtained. Currently there are 1,050 CNG refueling stations in the U.S., and the total is climbing 10% annually.

According to the Clean Cities Alternative Fuel Report issued by the Department of Energy, the price of natural gas in January was $2.10 per GGE (gasoline gallon equivalent). One GGE represents 5.7 lbs. (2.6 kg) of natural gas.

Of the nearly 15 million vehicles globally that burn CNG, about 112,000 are in the U.S., according to the DOE. Honda, the only OEM auto maker that assembles CNG vehicles in the U.S., has been producing a natural-gas-fueled Civic since 1998.

Chrysler is producing Dodge Ram 2500 CNG vehicles at its plant in Mexico, and there are numerous aftermarket outfitters that modify gasoline-burning vehicles to run on CNG. Among models available from retrofitters are the Chevrolet Silverado 2500, Chevy Savana van and Ford Transit Connect.