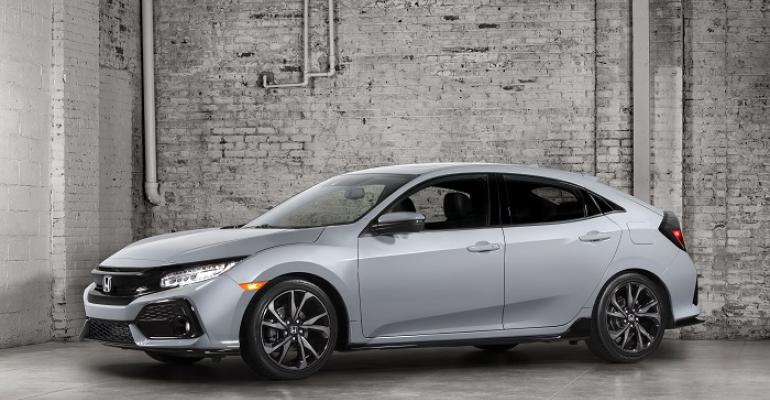 A booming compact hatchback sector in the U.S. is credited for Honda&rsquo;s cheery outlook. New entrants besides the Civic include the Chevy Cruze hatchback and forthcoming Hyundai Ioniq lineup.

And it expects the majority of those sales to be incremental rather than supplemental.

“We see this as a real growth opportunity for Civic, (because) looking at the compact segment, we’ve seen steady growth forecasted for the hatchback and the overall compact segment,” Rob Keough, senior product planner for the car, says here at a media preview of the car.

Honda says compact hatchbacks racked up 175,000 sales in 2015 in the U.S., and that figure is projected to grow steadily through 2022 thanks to newcomers to the market, as well as lifestyle and consumer demands. The European design of many compact hatches also is seen as motivating new-car buyers.

New to the market this year are the Chevy Cruze hatchback and the Toyota Corolla iM, the latter the former Scion iM 5-door that has been absorbed into the Corolla lineup for ’17.

A redesigned Hyundai Elantra GT is expected late this year or early next, while Hyundai also is bringing to market its Ioniq hatchback that features an all-alternative-powertrain lineup. The Ioniq hybrid and EV go on sale late this year, while the Ioniq plug-in hybrid is due next year in the U.S.

As for how the Civic hatchback will play against the existing sedan and coupe body styles, Honda is expecting largely men with outdoor-oriented hobbies to opt for the “progressive versatility” of the hatchback compared with the families that buy the sedan and single women purchasing the coupe.

Honda has sliced and diced the standard Civic lineup further to accommodate all wants and needs of those progressive buyers seeking versatility, adding Sport and Sport Touring models to the LX, EX and EX-L with navigation trim levels.

Those who favor value and utility are expected to gravitate to the LX, while premium-minded buyers should opt for the EX and EX-L. Civic hatchback buyers desiring sporty looks will lean toward the Sport and those who want sporty looks paired with premium materials and features will choose the Sport Touring grade, Keough says.

While the Sport and Sport Touring grades have the same 1.5L direct-injected turbocharged 4-cyl. as the LX, EX and EX-L hatches, they offer unique tuning and design.

The Civic hatch has the same MacPherson strut front and independent multilink rear suspensions as the Civic sedan and coupe, but Sport and Sport Touring models receive fluid-filled compliance bushings in the rear and also larger, 18-in. tires vs. the 16- and 17-in. tires of the LX and EX and EX-L with navigation grades.

Built off the LX Civic hatch, Sport hatches get a gloss-black aero kit as standard equipment, as well as a center exhaust and fog lights. Models with a CVT instead of a 6MT have standard paddle shifters.

The HondaSensing suite of safety technologies is standard on Sport Touring grades and optional on LX, EX, EX-L and Sport models.

Honda sees 35% of buyers opting for the midgrade EX hatchback, which has standard Display Audio, Apple CarPlay/Android Auto, remote engine start and heated side mirrors, and 26% of buyers choosing the Sport grade.

The LX base grade, with a standard cargo cover, automatic air conditioning, rear windshield wiper and electronic parking brake with brake hold, is expected to account for 25% of all Civic hatches sold.

The Civic hatchback has the same length and wheelbase as the Civic sedan, but slices 4.3 ins. (109 mm) from its rear overhang. The 5-door also is slightly lower.

Honda says its car outdoes the Focus, Mazda3 and Golf in total passenger and cargo volume, noting a jogging stroller can be placed in the hatch without the need to take off the front tire.

The Civic hatchback is being assembled at Honda’s Swindon, U.K., plant, not in the U.S. as are the coupe and sedan. A Honda spokesman says Swindon was able to absorb additional capacity for the U.S. without a bricks-and-mortar expansion.

A Swindon official recently told WardsAuto the plant is set to build 160,000 Civics over the next 18 months, or 800 per day. Swindon also builds the Civic Tourer and Type R models.

The high-powered Type R is due in the U.S. next year. Honda again will offer a Civic Si coupe and sedan, with an unveiling of the next generations of those models set for next week’s Los Angeles auto show.

Most Civic hatch grades went on sale Sept. 26 in the U.S., with the exception of models with HondaSensing. Those models, which include the Sport Touring grade, begin assembly at Swindon in December with a projected U.S. on-sale date of January.