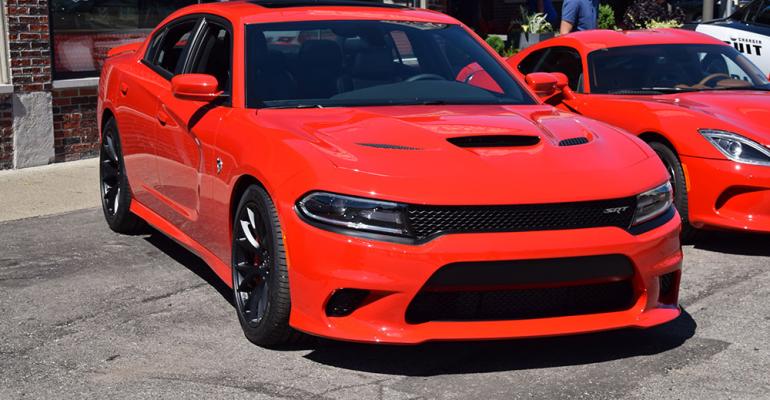 Hellcat Sales Not Limited to 1,200 Units

Chrysler unveils the 707-hp Dodge Charger SRT Hellcat, which goes on sale in early 2015. The automaker defuses rumors that production will be capped on its most powerful sedan or the 2-door Challenger SRT Hellcat.

BERKLEY, MI – Dodge’s high-output Hellcat powertrain brand finds another application – a vehicle with four doors instead of two – and the brand’s boss wants to be perfectly understood: Production will not be capped at 1,200 units.

When the 707-hp Dodge Challenger SRT Hellcat launched recently, a rumor the car would be low-volume stirred up angry Internet posters.

As the 4-door Charger SRT Hellcat is unveiled here as a precursor to this weekend’s Woodward Dream Cruise, Tim Kuniskis says those fears are unfounded.

“That’s not true about the 1,200 units. We’ve never said that,” the president and CEO of Dodge and SRT brands and fleet operations tells journalists. “That rumor really upset a lot of people.”

Pricing of the ’15 Charger SRT Hellcat will be released closer to its sales launch in first-quarter 2015. Production is set for Chrysler’s assembly plant in Brampton, ON, Canada.

But Kuniskis says the Challenger SRT Hellcat was priced purposely at $59,995, including gas-guzzler tax, “to put it within reach of the average performance enthusiast. I want to get as many of these cars on the road – and get as many people excited about Dodge – as possible.”

So how many Charger or Challenger Hellcats does Chrysler Group envision selling?

“I have no idea because we’ve never built a car like this,” he says, adding that initial sales should be brisk. “Over time, where will it settle in? I don’t know how many buyers are out there for a 700-hp car.”

Until the arrival of the Hellcat, the Challenger’s best sales year was 2013, when 51,462 deliveries were tallied, according to WardsAuto data. The Charger’s best year was 2007, when 119,289 units were sold.

Through the first seven months, the Challenger was No.3 in WardsAuto’s Middle Specialty Car segment with 30,575 deliveries, trailing the Ford Mustang and No.1 Chevrolet Camaro (56,633 units).

Also through July, the Charger was No.2 in WardsAuto’s Large Car segment with 55,306 sales, behind the Chevrolet Impala (88,135 units).

Mated to an 8-speed automatic transmission, the engine has a cast-iron block and aluminum heads and employs variable-cam timing; sodium-cooled hollow-stem exhaust valves; and a 2.3L twin-screw supercharger with integral charge-coolers.

When handing over the keys to a mechanic or valet, the owner can activate a lockout mode that limits engine speed to 4,000 rpm, restricts launch to second gear and prohibits traction control and speed control from being turned off.

The car also comes with two key fobs: The black one limits output to 500 hp, while the red fob enables the full 707 hp.

Fuel-economy ratings will be released after mileage has been certified by the EPA. Five performance modes – from Track to Eco – allow drivers to dial in as much efficiency or throttle response as desired.

Kuniskis sees the Challenger and Charger SRT Hellcats as mirror images of each other in terms of performance. “They’re both completely aligned. You just have to decide, ‘Do I want a 4-door or a 2-door?’” he says.

Exterior styling cues for the modified Charger include heat extractors in the hood, unique fascia and ground effects, LED lighting front and rear and a front splitter below the grille to optimize airflow.

Kuniskis says the Charger SRT Hellcat achieves a 0.335 coefficient of drag, and its longer body gives it 12% less drag than the Challenger version.