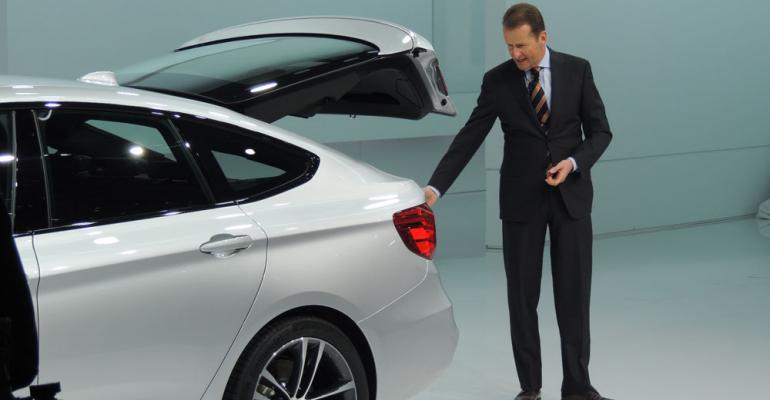 BMW is growing its popular 3-Series nameplate to include a hybrid, wagon and coupe, and a 2.0L 4-cyl. turbodiesel and detuned 4-cyl. turbocharged gasoline engine are headed to the U.S., all in addition to the new Gran Turismo.

GENEVA – BMW will find out this year how much utility its 3-Series customers demand.

This spring, the segment-leading sedan and coupe will be joined in the U.S. by the all-new Sport Wagon, and in September the family gets yet another member: a 5-door Gran Turismo body style with a coupe silhouette, a first for the 3-Series.

Production of the Gran Turismo is under way now at BMW’s plant in Regensburg, Germany, with European sales slated for May. The Regenburg plant also will assemble U.S. versions, beginning in July, the auto maker says.

Two years ago, BMW launched its first modern Gran Turismo as part of the larger 5-Series sedan lineup. WardsAuto does not break out Gran Turismo sales data, but BMW says the niche car makes up about 5% of 5-Series mix.

Herbert Diess, BMW member in charge of product development, says 5-Series Gran Turismo deliveries have been healthy enough worldwide to merit extending the unique package to the 3-Series, the brand’s most popular nameplate.

“It’s done well, and we believe this type of vehicle makes sense for a lot of American customers,” he tells WardsAuto after the car’s unveiling at the auto show here. “The 3-Series Gran Turismo is a thoroughly thought-out package.”

The Gran Turismo is longer and taller than the sedan, with a higher seating position and an ample cargo hold that becomes even more spacious when the second-row seats are folded down.

In other markets, BMW will offer the Gran Turismo with three gasoline and two diesel engines.

The U.S. powertrain lineup for the car aligns with the engines currently available in the 3-Series, both of which are Ward’s 10 Best Engines winners: the N20 2.0L TwinPower turbocharged 4-cyl. rated at 240 hp and N55 3.0L turbocharged inline-6 that makes 300 hp.

BMW sold 99,602 3-Series cars in the U.S. in 2012, making it the market’s best-selling luxury car, and the sales momentum is bound to continue as the brand put on a full-court press with 3-Series variants.

In addition to the GT and wagon, the 3-Series also comes available in a new hybrid, the ActiveHybrid3; the 4-Series coupe arrives at year’s end; and a 2.0L 4-cyl. turbodiesel is headed to the U.S., with additional information coming later this month at the New York auto show.

The Gran Turismo will not receive the diesel, but the engine will be found in the sedan and wagon, with all-wheel drive. In recent years, when BMW offered the 6-cyl. diesel in the 3-Series, the take rate was about 10% for the oil burner.

Another new 3-Series variant comes this spring in the form of the 320i sedan, with a detuned 180-hp version of the N20 2.0L turbo I-4. And there’s still one more arriving in 2014: the i3 electric vehicle. A coupe concept of the i3 was unveiled here.

At BMW’s press conference, board Chairman Norbert Reithofer says the auto maker is off to a great start for 2013.

“At more than 250,000 vehicles sold in the first two months, we have already recorded the best start of a year in our corporate history,” Reithofer says. “In Switzerland, we have also delivered a new record number of cars to customers in January and February of this year.”