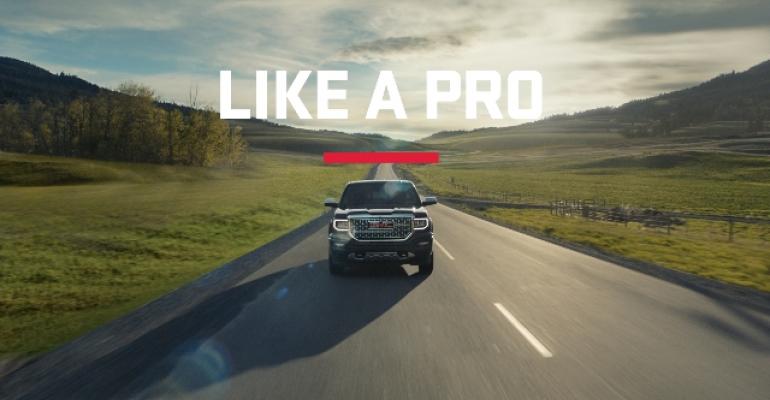 The three-spot campaign portrays owners of GMC pickups, SUVs and CUVs emotionally connected to their trucks and living their lives to the fullest.

GMC aims to strike while the iron is hot, as the General Motors premium-truck brand launches a new television advertising campaign alongside record demand for trucks and a pair of new products in the market’s hottest segments.

Called “Like A Pro,” the three-spot campaign portrays owners of GMC pickups, SUVs and CUVs emotionally connected to their trucks and living their lives to the fullest. It builds on the nearly two-decade-old GMC tagline of “We Are Professional Grade” and comes two years after “Precision,” which focused on the design and engineering of GMC vehicles.

“We’ve won the minds of consumers and this is going to win their hearts,” GMC Marketing Director Rich Latek tells WardsAuto.

The ads feature Denali-trim vehicles, a highly profitable sub-brand for GMC that accounts for 30% of GMC sales and earlier this year surpassed 1 million sales, and will debut the redesigned ’18 Terrain 5-passenger CUV.

The Terrain arrives at GMC dealers later this summer and quick on the heels of the redesigned and repositioned Acadia large CUV, which has enjoyed a 30% sales surge this year as Americans continue to flock to the segment.

Sales of the new Acadia have followed the larger industry trend with the redesigned model up 20.9% at 38,665 units. Including the older model, which stays on the market indefinitely for customers needing a little more cargo room, Acadia sales are ahead 50.4% at 48,111. GM has good reason to expect a similar uptick in Terrain sales after it bows.

The lead ad of “Like a Pro” is called “How Do You Want to Live – Anthem” and showcases in 30- and 60-second commercials people who reach higher in everything they do. It seeks to draw a parallel with GMC product design and engineering, which reaches higher, Latek says.

“Do you want a lead an average life or a great life?” he says of the ad.

Midway through the commercial, viewers get a sneak peek at the redesigned grille of the upcoming ’18 GMC Sierra Denali HD large pickup.

“Dad Like A Pro” premieres on Father’s Day in the U.S. and over 60 seconds highlights the relationship between a man and his son. GM has bought some pricey ad space for the commercial during the final round of the U.S. Open Championship golf tournament.

“There are a lot of eyeballs on that event,” Latek says.

A new Acadia spot called “Third Row Like A Pro,” comes in July. It portrays a parent managing three sports by leveraging the CUV’s three rows of seating.

GMC will use the campaign across all of its media elements and in dealer showrooms.