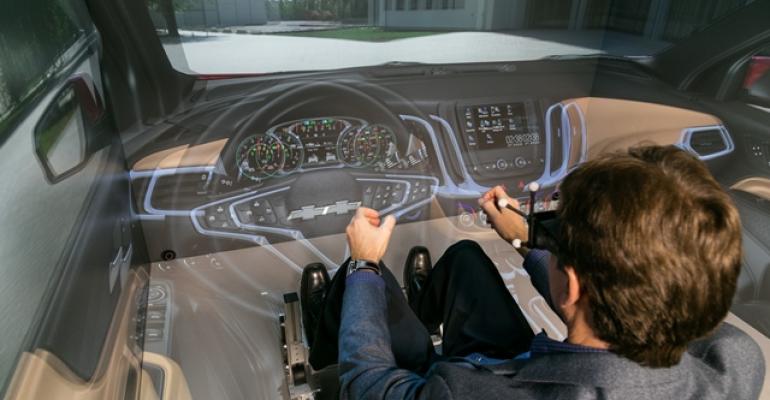 The visualizations are so realistic GM often can skip building expensive, time-consuming design prototypes such as interior bucks.

WARREN, MI – General Motors designers are taking a break from reality to draw up the next Chevrolet car or truck.

But the stylists are not checking out; they are checking in at the automaker’s newest 3-D CAVE Automated Virtual Environment to use the latest in virtual-reality tools for an up-close and realistic glimpse at how the sun might reflect off an exterior trim piece or how a particular design trick might make an interior seem roomier.

“It is a very, very important part of the design process, and a cool place to hang out,” Chevrolet Global Design chief John Cafaro says during a recent tour of the facility.

Cool may be understatement. At one end of the room inside GM’s global design headquarters here is a glass screen measuring 15 ft. (4.6 m) wide and 8 ft. (2.4 m) tall powered by a Barco 4K Digital Light-Processing stereo projector with a pixel resolution of 4095 x 2160. For perspective, that is twice as powerful as an IMAX theater screen. Bleacher-like seating gives guests an unobstructed view of the product under testing.

At the other end of the room sits the CAVE itself, a 4-sided cockpit of sorts, where designers sit wearing 3-D glasses with little, Martian-like antennas used to track their vision.

So when a designer looks across the simulated cabin of an ’18 Chevy Traverse to open the glovebox, or under the dash for one of the large CUV’s hidden storage cubbies, onlookers get the same perspective as 18 Barco 4K LED projectors with a pixel resolution of 3240 x 2835 paint real-time images on the screens.

GM Design leaders will put key executives in the chairs, too, hoping to give them an early look at future products or technologies, which can assist in big-budget decision making.

“It all about elevating the customer experience,” says Paul Snyder, chair of the Transportation Design Department at the College for Creative Studies in Detroit.

Beyond revolutionizing how designers understand elements such as surfacing or color, VR opens the door to greater collaboration between design studios and engineering units on emerging industry challenges such as the human-machine interface, he adds.

“It all can be virtually enabled,” Snyder says. “It is exciting and unbelievable.”

Designers are adding VR expertise to their professional tool kits as costs of the systems, which a decade ago stretched to billions of dollars and were accessible only to the largest global OEMs, and automakers and design houses can run competitions between design teams more inexpensively.

“The savings are huge, and our students are becoming so adept at the software that they are building their own (VR) interiors,” says Snyder, who plans to bring VR use to the curriculum at CCS.

GM’s VR tools played a key role in redesigning the Chevy Traverse, one of GM’s most popular and profitable family-haulers scheduled to be unveiled at the North American International Auto Show in January.

The CAVE at GM Design opened in May 2016 after the group’s previous VR room on a lower floor was destroyed during flooding at the technical center campus in 2014. The flood caused $132 million in damage. It is the only CAVE employed by the organization globally, although GM Europe Design is building one expected to be operational sometime in 2017.

GM’s VR rooms have contributed to the success of a number of recent vehicles. VR fine-tuned the interior design of the’14 Chevy Impala large sedan, which was a breakthrough car for Chevy from a styling perceptive. Designers used VR to evaluate concepts for blindspots, reflections and visibility of objects inside and outside the Impala, GM says.

GM employed a VR room while creating accessories for the hot-selling Chevy Colorado midsize pickup, too. An optional chrome assist-step was designed with black treads in part to avoid the unsightly reflection of drain holes in the bottom edges of the cab, the automaker says. VR permitted GM to perform the Colorado accessory work more than a year before a physical prototype was available.

GM is not alone in the use of VR. Several global automakers use it for design, engineering and manufacturing purposes. Ford, for example, has a lab outfitted with VR technology to replicate motions used by assembly-plant workers to raise manufacturing quality and reduce repetitive injuries.

Snyder does not expect VR to entirely replace traditional design tools such clay modeling, but sees it playing a larger role.

“It is not the end of a golden era, as some fear, but the beginning of a new one,” he says. “It’s going to be really cool.”