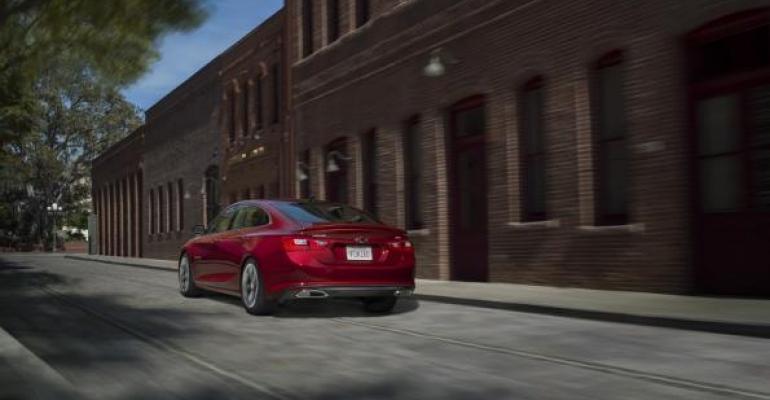 &ldquo;The segments are still significant,&rdquo; GM Chairman and CEO Mary Barra says. &ldquo;Because we&rsquo;ve made the investments, we need to deploy little to no capital going forward, so we view (cars) as an opportunity.&rdquo;

Unlike crosstown rivals Ford and FCA US, General Motors does not plan to dramatically pare its car lineup as buyers continue to flock toward trucks and CUVs. In fact, the Detroit automaker says more cars are coming.

GM Chairman and CEO Mary Barra says investments in the car line principally at its volume Chevrolet brand in the 2015-2016 timeframe give the automaker competitive offerings without a pressing need for significant additional redevelopment dollars soon.

“We launched very efficient architectures in the midsize and compact (segments) proving to be good platforms going forward with fairly minor changes,” Barra says during a conference call with journalists and Wall Street analysts to discuss GM’s $1.05 billion first-quarter profit.

“And the segments are still significant,” she adds. “Because we’ve made the investments, we need to deploy little to no capital going forward, so we view (cars) as an opportunity. What you’ll see us do is play very efficiently in a segment that, although it is declining, there is still an opportunity.”

GM reportedly is eyeing discontinuing the Sonic compact car and Impala large sedan, but it would still carry a large stable of cars without the two.

Cars account for 32.4% of the U.S. market, down sharply from just a few years ago, whereas CUVs command 38.2% off rapid growth recently, according to Wards Intelligence data. The trend does not appear to be waning anytime soon, but cars still accounted for 6.1 million deliveries in 2017.

The shift compelled Ford to announce one day earlier during its first-quarter earnings briefing plans to cease future investment in four North American car models, leaving it with the Ford Mustang sports car and Ford Focus compact car. It is unclear how Ford will proceed with its Lincoln Luxury plan, although the MKZ sedan shares a platform with the outgoing Ford Fusion. The Lincoln Continental large sedan is all-new.

In fact, more cars are coming from GM as the automaker rolls out its new global emerging markets platform next year. The platform, which could spawn a variety of body styles and consolidates several legacy architectures into one, is expected to grow the profitability of Chevrolet and Buick entries in markets such as China and South America. It will account for 2 million vehicles annually.

The platform will not be seen in North America, but it arrives as the shift from cars to CUVs expands globally.

“China still has a significant car market,” Barra says. “South America also still has a very strong car portfolio. We are well-positioned in cars. We are always looking for efficiencies and we’ll be responsive to the market.”

As a sign of that responsiveness, Barra points to a decision in the quarter to take the automaker’s Lordstown, OH, assembly plant down to a single shift later this year. Lordstown builds the Chevy Cruze compact car. At the same time, GM will add a third shift to its Spring Hill, TN, assembly plant. Spring Hill builds the Cadillac XT5 and GMC Acadia CUVs.

“We get a lot of traction with that,” he says. “It’s not lost on us that (CUVs) are more competitive. What we’re going to do is run real hard to stay out in front of that and continue to drive cost efficiencies with the entries that we have.”

GM also confirms a pending agreement with the South Korean government and the union for its Korean operations to avoid bankruptcy. A new wage deal with the union paves the way for a $750 million capital injection by the government’s lead bank, which holds a 17% stake in the operation. GM will invest $3.6 billion.

The deal awaiting final approval this week will save GM’s operations in the country $500 million annually and keep a key supply base and engineering center alive.

As for the big move atop GM’s Cadillac luxury brand earlier this month, where brand chief Johan de Nysschen was abruptly pushed out and replaced with longtime GM executive Steve Carlisle, Barra says it marks no change in strategy.

“This is not a right turn,” she says. “We have a strong product cadence (and) longer-term there is an opportunity for Cadillac to redefine luxury.”

Barra cites the role Cadillac could play in GM’s autonomous-vehicle plans, but reiterates expectations for the century-old brand to double sales to 500,000 globally by 2020 and deliver a $1 billion profit improvement.

“We will work hard to accelerate that,” she says.