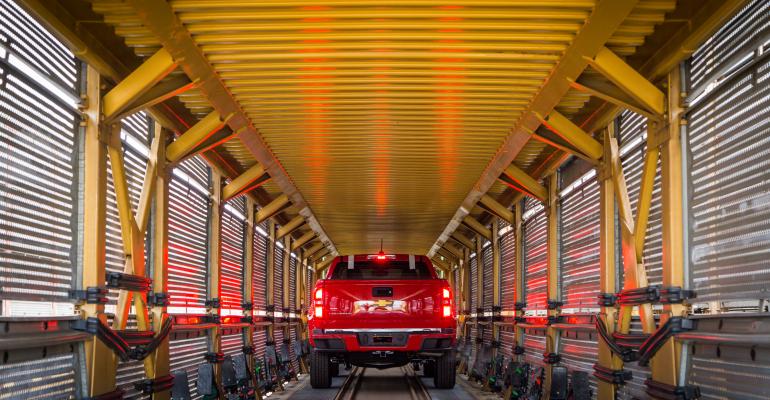 The output hike will make a difference in the market, executives say, because it is not simply an increase in line speed. The automaker has added hard tooling to the assembly line.

Piszar says the output hike at GM’s Wentzville, MO, assembly plant will make a difference in the market, where last year buyers snapped up 114,507 units of the trucks, because it is not simply an increase in line speed. The automaker has added hard tooling to the assembly line, he tells WardsAuto, and made corresponding capacity increases to the paint shop. It is the second output hike for the pickups since their launch.

“We will make as many as we can while maintaining quality levels,” Piszar says, declining to disclose a unit number on the increase.

Like all GM truck plants, as well as most across the industry, Wentzville operates on three shifts with overtime, as low gasoline prices and a strong economy have fueled sales of pickups and SUVs. But the suburban St. Louis facility is a bit unique in that it also builds the fullsize Chevy Express and GMC Savana vans, which have seen demand retreat but still combined for 85,374 deliveries in 2015.

“Vans are hot, too,” Piszar says, admitting it has complicated GM’s ambitions to crank up production of the Colorado and Canyon.

Wentzville produced 236,537 pickups and vans in 2015, running overtime nearly every week, according to WardsAuto estimates. The mix included 136,616 units of the Colorado and Canyon.

The pickups closed January with extremely lean inventories, such as a seasonally sparse 58 days’ supply for the Colorado against 78 days’ for the industry.

More alarming is the fact automakers generally want pickup inventories three times greater than an average sales month. Stocks of the Colorado stood at 13,250 units against average monthly deliveries of just over 7,000.

“We cannot build these trucks fast enough,” Piszar says, noting that last year the Colorado accounted for 74% of the growth in its segment, which surged 40.8% to 357,406.

The addition of a diesel powertrain to the Colorado and Canyon lines has added another layer of complexity to the manufacturing process at Wentzville, Piszar admits, so GM plans to bleed those models out slowly to keep an eye on quality.

That fact, coupled with the recent work to raise capacity, might explain why some buyers are experiencing lengthy delays to their orders. One owner contacted by WardsAuto has waited 188 days for his Colorado diesel and says the production date has been moved back a number of times. He says he would consider another vehicle if the opportunity arose.

Piszar promises to eventually catch up with diesel demand.

“We can build as many as necessary,” Piszar says. “We will have some flexibility there.”