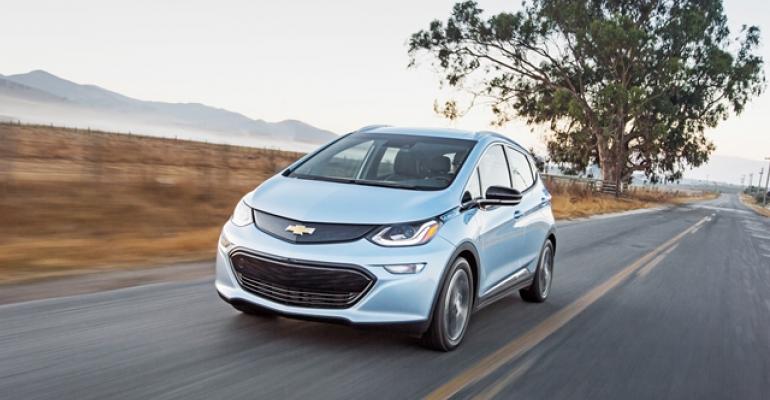 The Detroit automaker delivered 245,387 cars and trucks last month, according to WardsAuto data, compared with 252,603 in the same period last year.

General Motors reports U.S. light-vehicle daily sales fell 2.9% in November, mostly due to weak demand for cars, but the Detroit automaker expects customers to return to its dealers’ showrooms with gusto this month.

GM delivered 245,387 cars and trucks last month, according to WardsAuto data, compared with 252,603 in the same period last year. Through 11 months this year, GM sales are off 1.2% to 2.69 million units from 2.72 million in 2016. With several smaller automakers yet to report November sales, GM’s market share for last month was an estimated 17.9% compared with 18.4% year-ago.

Sales elsewhere in the industry were scattershot, with Ford up 6.9% and Fiat-Chrysler down 3.6%, while Toyota deliveries tumbled 5.1%, Honda sales were up 3.7% and Nissan surged 8.7%. The industry was tracking at an estimated 17.1 million-unit seasonally adjusted annual rate of sales, down from 17.6 million last year and well off October’s unusually high 18.1 million.

GM, however, remains in a relatively strong position heading into an historically frenzied December sales market with a number of all-new, or newly redesigned, crossovers intended for every consumer’s purse and purpose.

“More vehicles are sold in December than any other month, and we are very well positioned because we have momentum in so many segments, but especially in crossovers,” says Kurt McNeil, vice president-U.S. Sales Operations.

“When we close the books on 2017, GM will show very healthy inventory levels, significantly lower daily rental sales for the third year in row, and the best year in our history for crossover deliveries by far,” he says in a statement.

The automaker has been slashing production at car assembly plants this year to meet trend and bring down inventories swollen for most of the year. The automaker says it finished November with 819,327 vehicles in stock for an 83 days’ supply, compared with 813,648 and 80 days’ last year. The cutbacks are expected to continue into the first quarter of 2018, with a WardsAuto forecast calling for GM’s North American output to fall an estimated 5% compared with the same period last year.

The automaker also has been reducing sales to rental-car companies this year, choosing instead to focus on the retail channel, where it says demand was flat compared with year-ago.

Sales last month from GM’s volume Chevrolet brand slipped 1.1% to 167,777 units from 169,634 last year. Deliveries of the Silverado large pickup, GM’s best-selling product, rose 2.6% to 46,441 units from 45,280. But demand for the automaker’s No.2-selling Equinox 5-passenger crossover tumbled 8.9% to 19,667 units from 21,600, likely due to tight inventories resulting from a four-week strike earlier this year at its main assembly plant in Canada.

The closely watched and nearly 1-year-old Chevy Bolt battery-electric vehicle sold 2,987 units last month, once again outpacing its plug-in sister the Chevy Volt with 1,702 deliveries, which was down 32.8% from 2,531 in the same period last year. Sales of the Chevy Malibu, which is GM’s strongest entry in the car segment, dove 27.8% to 13,420 units from 18,577.

Buick sales dipped 3.0% to 17,974 units from 18,530 in the same period last year. Car sales at the premium-leaning brand continued to smart badly from consumer preference for trucks, but sales of its redesigned Enclave 7-passenger crossover nearly doubled to 6,548 units from 3,508 and deliveries of the Envision midsize crossover soared 24.8% to 2,228 from 1,785.

Cadillac sales dropped 12.8% to 13,359 units from 15,326, as its car-heavy portfolio awaits additional crossovers to perhaps improve its fortunes in the New Year.

Despite the sales plateau, GM expects another banner year for the industry in 2018.

“U.S. economic growth has stepped up and we expect the momentum will carry over to 2018,” says GM Chief Economist Mustafa Mohatarem. “Employment continues to grow at a solid pace, wage growth will accelerate and consumer confidence just hit a 17-year high, so industry sales should remain strong.”