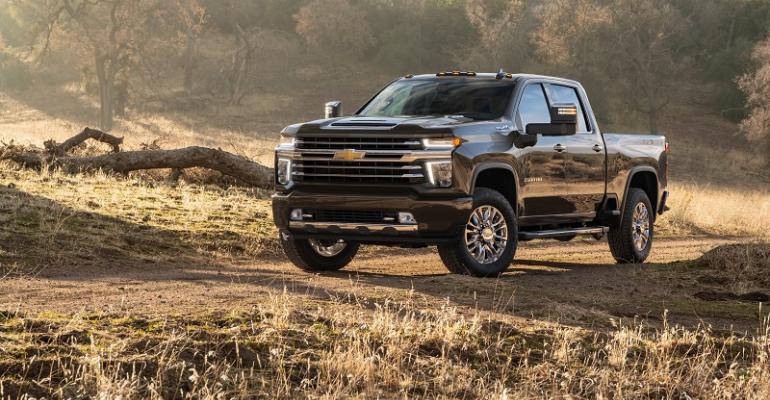 GM sold 746,659 cars, trucks and crossovers in the quarter, compared with 758,376 in the same period last year, according to Wards Intelligence data.

A weak quarter for its volume-selling Chevrolet brand dragged deliveries down 1.5% for General Motors in the April-June period, but the Detroit automaker remains optimistic about the second half of the year with more pickups coming to a truck-hungry U.S. market.

GM sold 746,659 cars, trucks and crossovers in the second quarter, compared with 758,376 in the same period last year, according to Wards Intelligence data.

GM continues to launch its redesigned ’19 large pickups, the Chevy Silverado and GMC Sierra, while heavy-duty models of those trucks have begun trickling out to dealers. Both launches were heavily front-loaded with crew-cab body styles, and GM says it did so at the expense of volume to increase profitability.

The automaker reports the crew-cab mix among light-duty pickups jumped to 75% in the quarter compared with 60% last year. Full production began in March for the more affordable regular- and double-cab body styles, and GM says inventories are approaching targeted levels.

Despite launching the new Silverado and Sierra at the end of last year, GM already has planned to invest millions of dollars more into the assembly plants building the trucks to raise output 20,000 units annually and satisfy anticipated demand.

The automaker also is adding for the ’20 model year an optional 6.2L V-8 to its popular Silverado Trail Boss trim. Previously, the Trail Boss was available with the 5.3L V-8 only. A new 3.0L inline 6-cyl. diesel launches soon in the light-duty pickups, too.

The truck war in Detroit shows no signs of cooling, with new models from GM, Ford and Fiat Chrysler’s Ram brand duking it out. Ram sales have been especially hot, putting month-to-month pressure on GM, while the Ford F-150 maintains its longtime leadership spot.

To highlight its specific strengths in pickups, GM says it will begin separately reporting sales results for its light- and heavy-duty pickups to give investors and other stakeholders a clearer view of its performance in the closely linked segments.

“The light-duty segment is the highest-volume part of the pickup market, and we are expanding choice to make sure we meet the needs of every customer,” says Kurt McNeil, vice president-U.S. sales operations at GM.

“Heavy-duty trucks, by contrast, are about 25% of (large) pickup sales. Our HDs are purpose-built machines for people who need maximum capability, and we are poised for significant growth,” McNeil says in a statement.

According to GM Chief Economist Elaine Buckberg, the seasonally adjusted annual selling rate for the first half of the year is expected to clock in at 17 million units.

“The U.S. economy continues to grow at a healthy pace. Jobs are plentiful, and inflation remains low,” Buckberg says. “Auto demand was better than anticipated in the first half, and we expect strong performance in the second half of the year. If the Fed cuts rates, as widely expected, lower financing costs will provide further support to auto sales.”