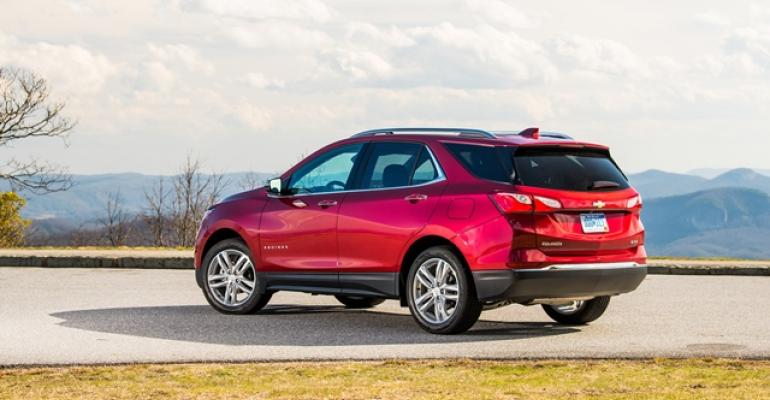 The Detroit automaker sold 252,813 cars and trucks last month, compared with 258,588 in the same period last year, according to WardsAuto data.

Riding the strength of recently redesigned crossovers and a robust month for the industry, General Motors reports its October U.S. daily deliveries rose 1.7%, despite limited availability of its No.2 selling vehicle.

The Detroit automaker sold 252,813 cars and trucks last month, compared with 258,588 in the same period last year, according to WardsAuto data. Although GM’s volume fell compared with October 2016, its year-over-year comparison was up thanks to one fewer selling day last month.

“We are heading into the fourth quarter with good momentum, thanks to a strong U.S. economy and very strong pickup and crossover sales,” says Kurt McNeil, vice president-U.S. sales operations at GM.

McNeil says demand last month for the automaker’s crossovers, also known as CUVs, was so strong GM dealers would have sold more if inventories of key models were higher.

A month-long strike by workers at GM’s Ingersoll, ON, Canada, assembly plant cost thousands of units of Chevrolet Equinox production before the automaker resolved the dispute Oct. 15. The Equinox 5-passenger crossover is GM’s No.2 selling product behind the Chevy Silverado large pickup and recently was redesigned from stem to stern.

“The all-new Chevrolet Equinox is off to a great start and we could have sold even more if we had more available,” McNeil says in a statement.