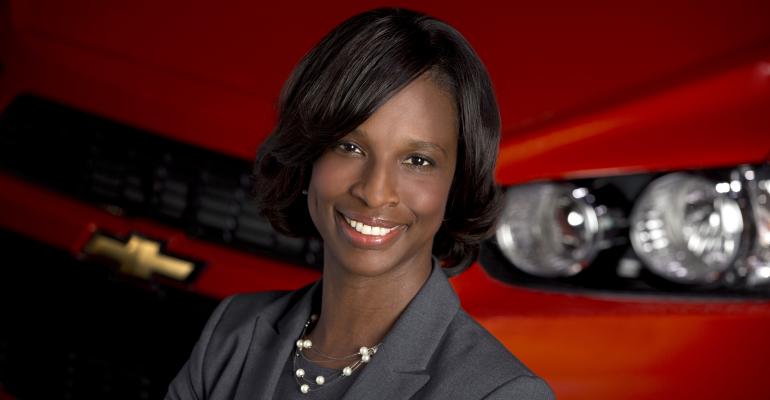 The executive thinks she can heighten satisfaction among existing owners by offering new connectivity features, such as OnStar&rsquo;s RemoteLink application for smartphone users.

DETROIT – General Motors plans to make vehicle connectivity a “360-degree” loop between the automaker and its customers, leaning heavily on new high-speed data connections inside the automaker’s vehicles to attract new buyers and hold onto existing ones.

“From the time a customer starts looking at potential vehicles online, to when they are at the dealership, to when they have the car… I would love to connect them through the entire experience, 360-degrees,” says Alicia Boler-Davis, senior vice president-Global Connected Customer Experience at GM.

A onetime GM plant manager fast-tracked up the executive ladder by former CEO Dan Akerson, Boler-Davis oversees one the most ambitious, far-reaching units of the automaker. Her domain includes OnStar, which recently launched in China, rolls out in Europe later this year and in North America just added 4G LTE wireless connectivity across the GM vehicle portfolio.

Boler-Davis also managed GM’s global quality group, which she spent most of 2013 and 2014 overhauling at the height of the automaker’s recall crisis. She championed greater use of social media channels to reach owners and set up Customer Engagement Centers where OnStar-like advisers answer owner calls. Last year, GM was one of the most-awarded automakers for its vehicle quality, despite the recall rash.

According to a recent study from McKinsey & Co., connectivity will be a key battleground for automakers in the coming years and may significantly alter the competitive landscape. The report found 13% of buyers already will not consider a vehicle without Internet access, and more than 25% prioritize connectivity over other key vehicle features such as engine horsepower and fuel efficiency.

But the study also suggests connectivity must add value, as just 21% of the buyers surveyed said they are willing to pay for connected services. It puts the onus on Boler-Davis to choose carefully which technologies to add to GM vehicles.

“We believe connectivity is a place we can differentiate ourselves,” she says of GM, which is conducting the industry’s broadest rollout of 4G wireless connectivity. “We believe this is a competitive advantage and being first absolutely has its advantage.”

But, Boler-Davis adds, she’s a chief engineer by training so she’s no stranger to technology, and her top priority is to leverage connectivity to improve the experience consumers have while shopping, buying and owning GM products.

One key element of that work is in the shopping and buying process, where she fears too many customers find themselves “starting over” too often. In other words, she wants a customer’s information to follow them through every step of the process.

“We want to improve that,” she tells WardsAuto in an interview. “And how can we leverage wait time? What can be done while the customer is waiting at the dealership? Connectivity helps you get that done.”

Boler-Davis thinks she can heighten satisfaction among current owners by offering new connectivity features, such as OnStar’s RemoteLink application for smartphone users.

The RemoteLink app allows owners access to vehicle functions such as remote start, energy and fuel consumption, a vehicle locator and OnStar accounts. GM says 1.3 million owners use the app, which was launched in 2010 on the Chevrolet Volt. It’s available on all GM models and in the ’14 model year the automaker made key-fob elements of the app free. A second-generation version rolled out to owners in January.

Another connectivity item from OnStar launching on select Chevrolet models in ’16 can alert owners to potential problems with their vehicle before a breakdown occurs.

The opt-in service leverages the 4G LTE connection in the car and what GM calls industry-leading prognostic technology to warn drivers if the car’s battery, starter motor or fuel pump may fail. Those are historically the highest-wear items of a vehicle and critical to keeping the engine running.

“We’ll continue to add more systems and modules to that as we go forward, but we know customers do not want to be stranded, so that’s why we started there,” she says.

Two other connectivity services roll out from OnStar this year. A partnership with insurance provider Progressive gives U.S. OnStar users the opportunity to enroll in a 90-day driving assessment that could lead to discounted insurance offers. At the recent Consumer Electronics show in Las Vegas OnStar announced AtYour Service, which connects U.S. and Canadian users with merchants and retailers on their drive and then provides coupons and information on hotels, restaurants and parking.

Whether consumers will be willing to pay for greater connectivity remains unclear, but Boler-Davis points to the 43 million RemoteLink interactions last year, which was more than double the number in 2013.

“When you look at those numbers, customers are telling us they see the value in the connectivity,” she says.