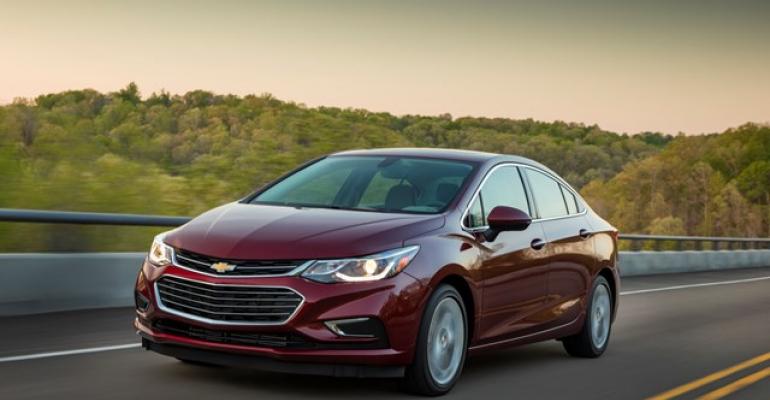 Chevy marketers expect to have plenty of blocking and tackling ahead, as they work to get diesel back into the conversation after a sullying by the VW emissions-cheating scandal.

DETROIT – Chevrolet has a new diesel for the U.S. and executives at the General Motors brand pledge to market the technology more shrewdly than before.

Three years ago GM launched the ’14 Chevy Cruze Clean Turbo Diesel, the Detroit automaker’s first application of the technology in a car since the 1980s. Critics beamed over the car and it won a 2014 Wards 10 Best Engines award for its fuel economy and sporty dynamics, but sales stalled so GM did not renew the offering for ’16.

According to WardsAuto data, GM sold 12,554 Cruze turbodiesels for 1.2% of the nameplate’s engine mix between May 2013 and January 2016. GM planners at one point thought the engine could draw up to a 10% mix, an aggressive but plausible estimate given the Volkswagen Jetta TDI at the time accounted for 25% of its sales.

The culprits behind the Cruze diesel’s demise were many. It arguably was too richly contented from the factory, carrying a $27,000 base price while the Jetta TDI cost $2,600 less. It also lacked a manual-transmission option, which a lot of diesel-car shoppers prefer.

But it lacked awareness, too. Unless buyers were zeroed-in a diesel, the Cruze overshot them. And when it did get noticed, GM marketers say, its message struck the wrong tone. It did not take long for the initial enthusiasm to wane.

“It was probably viewed as an annoyance,” says Steve Majoros, director-marketing, Cars and Crossovers at GM. “If someone wanted it, they could come and get it.”

Majoros, who joined Chevy marketing from an outside agency shortly after the last Cruze diesel launched, says GM will approach the marketing of an all-new Chevy diesel outfitted in the ’17 Cruze sedan and hatchback and ’18 Equinox CUV differently.

“I’ve been telling my diesel team, go sit with the (electric-vehicle) team, because you can learn a lot, a lot about how to (approach) a high-interest, high-specialty, very engaged customer base, because that’s what these diesel customers are,” Majoros tells WardsAuto in an interview.

At the same time, the two alternative propulsion technologies are perceived quite differently in the U.S. market. For example, diesels do not enjoy the groundswell of support EVs do from regulators, giant utility companies, consumer groups and enthusiasts.

“It’s as if everyone is rooting for electric,” Majoros says. “On diesel, we don’t have as much gravitas.”

Majoros expects his team will have plenty of blocking and tackling ahead, as they work to get diesel back into the technology conversation after a sullying by the Volkswagen emissions-cheating scandal.

Ram and Jeep diesels from FCA US also have been flagged for EPA violations. The regulatory activity has stalled certification of many U.S. diesels for 2017, including the new Cruze engine and existing light-truck diesels at GM.

“That may have clouded what people think,” he offers. “We have to pivot the conversation.”

An early component of GM’s strategy will be wooing VW owners who have no other new-car options since the German automaker ceased selling diesels.

But it is not as easy as hanging out a for-sale sign, Majoros warns. Chevy must prove its technology to VW owners, perhaps through drive experience and technical messages, before those owners can be expected to consider the Cruze or Equinox. And later, GM hopes, tell their friends and family to buy one.

“We’ve also got to open the aperture a bit, because we can’t just rely on the fact we’ll get people who are diesel friendly, that they’ll just walk over to us,” he says.

One reason for the uncertainty is VW diesel owners are cashing reimbursement checks from the automaker, a dynamic that shakes up conventional marketing logic.

“We’re in a real-time environment with this,” Majoros says. “I don’t have 50 years of data on VW diesel disposers, because right now they have the psychology of ‘Here’s a check.’ No data will replicate what you will process in your mind with that.”

During the first quarter of this year, GM plans to “storm the beach” with marketing materials to clean up the diesel conversation, Majoros says, followed by a dealer-training program as the product starts to arrive in the spring. In the meantime, the diesel marketing team has been prowling social media for insight on the buyers it missed the first time around.

Fuel economy will be a big element of the initial message. GM has not released EPA fuel-economy estimates for the car, but executives at the North American International Auto Show last week hinted it could be as much as 50 mpg (4.7 L/100 km) or more, likely in the city cycle.

“We’ve seen some preliminary numbers on the Cruze and they are pretty monstrous numbers,” he says. “There is something about the number that just (says), ‘Wow.’”

Fun-to-drive also will be part of the message, given the driver-pleasing torque diesel provides. This time the Cruze will offer a 6-speed manual, while the Equinox will stick with an automatic. They both will offer a 9-speed automatic with the diesel for a 1-2 technical punch of efficiency and elevated driving dynamics. The diesel also will be available with the Cruze hatchback.

Pricing has not been released, either, but at the auto show GM Executive Vice President Mark Reuss pledged it would be “a good option at the right price point.”

But one thing for sure, marketing of the new Chevy diesel will remain focused on demographics and geographies where the technology makes the most sense.

“You’re not going to see a diesel ad during the Super Bowl,” Majoros concedes.