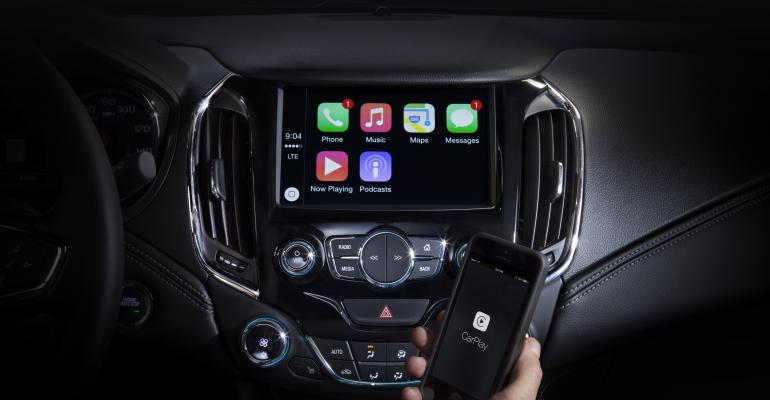 The automaker says 2.3 billion global smartphone users demanding better integration of the devices into their vehicles drives the addition of the technologies to its products.

General Motors will become the latest automaker to offer Apple CarPlay and Android Auto when it launches the industry’s broadest deployment the smartphone integration technologies on Chevrolet vehicles in select global markets this summer.

“For most of us, our smartphones are essential,” GM CEO Mary Barra says in a statement. “Partnering with Apple and Google to offer CarPlay and Android Auto compatibility across the widest range of models in the industry is a great example of how Chevrolet continues to democratize technology that’s important to our customers.”

Apple CarPlay and Android Auto will bow June 24 in the U.S. on the redesigned ’16 Chevy Cruze compact car, followed by 13 other models representing 2.4 million sales, or 51% of the brand’s global deliveries.

GM says 2.3 billion global smartphone users demanding better integration of the devices to their vehicles drives the addition of Apple CarPlay and Android Auto to its products.

However, a recent survey from J.D. Power shows a lack of interest in the technologies across generations. J.D. Power blames the lackluster take rate on the fact many automakers up to this point have offered either one instead of both, which GM will do with its deployment.

“The solution for (non-luxury) brands may be to offer both operating systems and allow customers to select the option best suited for them,” Kristin Kolodge, executive director-driver interaction & HMI research at J.D. Power, said in the consultant’s April 2015 popular technologies study.

Smartphone data rates will apply to the use of either Apple CarPlay or Android Auto, but integration of the technologies with a Chevy vehicle will no cost extra. Most of the brand’s cars and trucks come with a 7-in. touchscreen as standard equipment, with the exception of some base-model pickups.