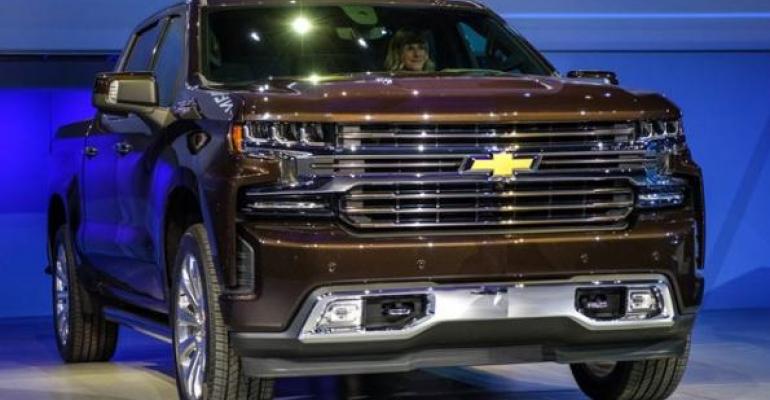 CFO Chuck Stevens says the truck launch will increase GM&rsquo;s capital spending to the $8.5 billion range, which is in line with the elevated investment of recent years.

DETROIT – General Motors Chairman and CEO Mary Barra says the automaker soon will report a profitable 2017 and forecasts another strong performance this year and in 2019 on the strength of its redesigned fullsize truck portfolio, growing global sales for its Cadillac luxury division and improvements within its international operations.

“2017 was a very good year for General Motors,” Barra says during a media briefing ahead of an annual Deutsche Bank investor presentation. “We project another strong year.”

But this year will have headwinds, the automaker’s executives admit. Costs associated with the launch of redesigned fullsize trucks will weigh on GM’s core operations and pricing pressures continue in the U.S. and China, its two largest sales markets, Chief Financial Officer Chuck Stevens says.

Stevens says the truck launch will keep GM’s capital spending in the $8.5 billion range, which is in line with the elevated investment of recent years.

“But then going beyond that, based on a number of decisions we’ve made to simplify the business, we would expect capital investment in the core business to come down from that peak level,” Stevens tells WardsAuto.

“We continue to invest in the future of personal mobility and transportation as a service, but we would still expect capital spending to come down,” he says.

Part of GM’s future mobility investment includes an outlay of about $1 billion annually in autonomous-vehicle development in anticipation of deploying a ride-hailing fleet in 2019.

“That’s a number that has been rising relatively steadily,” GM President Dan Ammann says, citing costs related to building out the AV-engineering team at GM and expectations for building more test units for validation.

Electrification also will demand capital investment from GM. The automaker plans to introduce two new battery-electric vehicles in the next 12 months, the first of 20 BEVs by 2023. Barra stops short of breaking out costs related to the EV launches, however.

Residual values and a softening U.S. market also are challenges this year, but a full year with GM’s redesigned crossovers in the market, continued progress on streamlining costs, growth in other businesses such as GM Financial and improvements at its international operations should help offset the headwinds, the automaker says.

Beyond 2019, GM is more bullish because its profitable trucks will be in the market and investments within its Cadillac luxury brand will begin paying off.

The redesigned ’19 Chevrolet Silverado large pickup bowed last week ahead of the North American International Auto Show here. The GMC Sierra large pickup will soon follow, as will new heavy-duty models of the pickups and new large SUVs and large luxury SUVs off the same architecture. Together the trucks account for $65 billion of annual revenue, Ammann tells investors.

The latest generation of trucks should be GM’s most profitable, the automaker suggests, because it more effectively addresses the lower and higher ends of the market with a better entry-level model and more bells and whistles on the luxury units.

GM says average-transaction prices on its fullsize trucks already outperform the industry average at more than $42,000, but the automaker sees a “multibillion-dollar opportunity” remaining. A key element of that opportunity is heightened consumer demand for big-margin crew-cab pickups with more personal-use buyers in the market compared with when GM launched the current-generation model.

GM has struggled in the past to build enough crew-cab models and plans to improve its manufacturing capacity for the body style when retooling of assembly plants making the trucks begins in the coming months.

“We’ve been constrained on that perennially,” Ammann says. “We’ll be opening up capacity constraints we’ve had on crew cab. Put it all together and you will have a significant richening of the mix.”

Cadillac, which saw global sales rise 15.5% to a record 356,457 cars and trucks in 2017 but struggled in the U.S. due to a shift in consumer preferences away from its sedan-heavy lineup to crossovers it currently lacks, will be on a path to a doubling of sales and profitability between 2018 and 2021. For example, the important XT4 small crossover begins production at GM’s Kansas City, KS, assembly plant in the coming weeks.

“The U.S. market will drive profitability of Cadillac,” Stevens says.

GM’s outlook for is international operations, a business unit that excludes China, also improves. The automaker expects profitability for GMIO in 2019 after posting losses the past four years.

Stabilized South America operations, which have been affected by economic swings and political unrest in Brazil, are a key element of the expected rebound at GMIO.