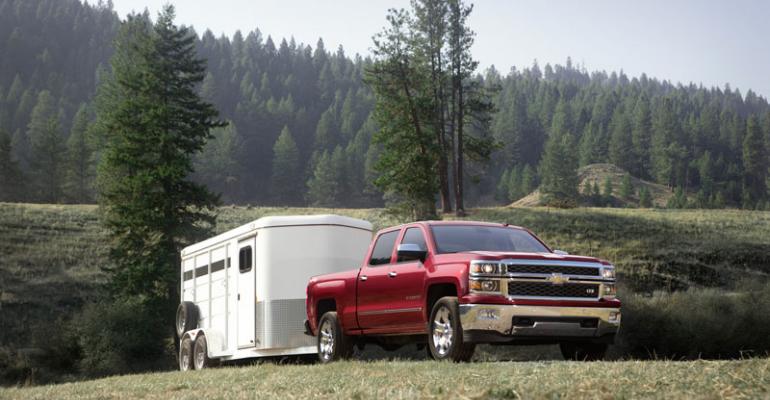 Production of Silverado and Sierra 1500 crew-cab models begins in the second quarter, with additional cab styles to follow. Pricing will be announced closer to the on-sale date.

In a statement ahead of the reveal here today, and a public debut at next month’s North American International Auto Show in Detroit, GM North America President Mark Reuss characterizes the new trucks as “the most-refined, best-engineered pickups on the market.”

The new pickups will play a major role in solidifying GM’s successful turnaround from its 2009 bankruptcy. Although the auto maker posted a record profit in 2011 and is expected to report strong income again in 2012, it probably still will lose market share.

GM currently commands 17.8% of the U.S. light-vehicle market, according to WardsAuto data, compared with 19.7% in 2011 and upwards of 24.4% in the years prior to its bankruptcy. Blame a truck lineup older than its competition. Excluding cross/utility vehicles, GM claimed 24.4% of the light-truck segment through November, compared with 32.1% in 2007.

GM importantly has rebalanced its product portfolio since bankruptcy away from less fuel-efficient trucks and SUVs, a trend reflected across the industry, and toward the higher-mileage cars and CUVs U.S. consumers currently desire.

But the large trucks, especially pickups, remain a bread-and-butter play for the auto maker, bringing in thousands of dollars in profits with each unit sold.

The backbone of the new Silverado and Sierra is their three new engines, which GM rebrands  EcoTec3, dropping the former Vortec moniker, to emphasize the fuel efficiency and technology that distinguish the trio.

Power and torque ratings, as well as fuel-economy estimates, will be announced later.

The new V-6 engine retains its 4.3L displacement, but like its V-8 big brothers shares only a handful of parts with its predecessor. GM says the V-6 targets a “budget-conscious consumer” seeking a state-of-the-art engine for towing and hauling.

Displacements of 5.3L and 6.2L for the new V-8s also will ring familiar with GM truck enthusiasts, but both are engineered for more horsepower and torque and improved fuel efficiency, the auto maker says.

The auto maker has offered 6.2L V-8 in its large SUVs, but the only thing common between the two engines would be their displacement.

Key technologies on the new engines include direct-injection, which GM marries to its tried-and-true overhead-valve design with pushrod actuators, as well as continuously variable valve cam-phasing technology, an advanced combustion system and fuel-saving cylinder deactivation.

“Our new EcoTec3 engines harness some of the most advanced powertrain technologies in the world to meet the specialized demands of truck owners,” says Jordan Lee, small-block chief engineer and program manager.

The exterior design of the new Silverado and Sierra, while hardly revolutionary, gives the pickups a much fresher look. Both gain aerodynamics and functionality. For example, the slippery design provides better fuel economy and reduced wind noise.

Functionality improves with items such as the addition of a 78-in. (198-cm) cargo bed to the existing 68-in. (173-cm) bed available on current models.

Rear-bumper pockets, or “corner steps” as GM calls them, make climbing in and out of the cargo bed with the tailgate up or down easier than before.

GM improved the chassis with a revised front and rear suspension, and wider wheels add to ride comfort and handling. Both pickups receive a fuel-saving electronic-power-steering system and longer-life brake rotors. Cab and frame structures are strengthened to improve long-term durability and capability.

Knobs, buttons and interfaces are larger, the auto maker says, to make them easier to read and operate, even with a gloved hand.

Chevrolet’s optional MyLink and GMC’s IntelliLink upgrade the driver-information center’s color display to an 8-in. (20-cm) screen and allow owners to pair multiple mobile devices with the pickup and stream music and other audio.

A Silverado Z71 series once again will be available. The model enhances off-road capability of the pickup, while Sierra models carry the suspension package as optional.

GM will build the new pickups in Fort Wayne, IN, and Silao, Mexico.