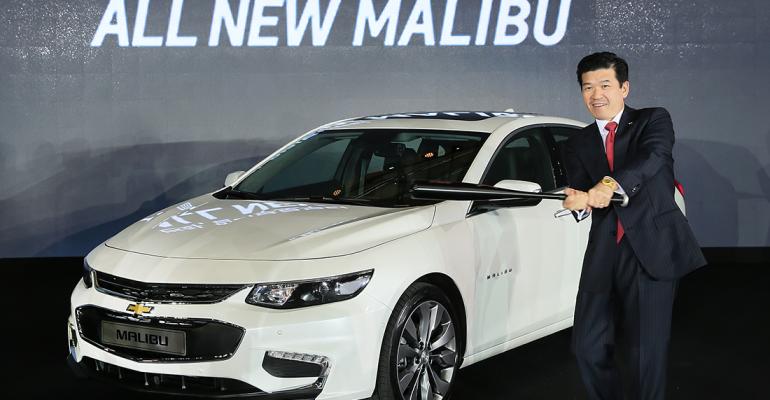 The automaker is looking for the revamped sedan to challenge the Hyundai Sonata for supremacy in one of Korea&rsquo;s hottest and most competitive segments.

GM Korea is counting on the new ʼ17 Chevrolet Malibu to capture the lead in the increasingly popular midsize-sedan segment.

“The Malibu’s outstanding quality and competitive price will completely change the dynamics of the Korean midsize sedan landscape,” says GM Korea CEO James Kim at the car’s local introduction this week. “It’s all new from the ground up…and will far exceed expectations of midsize sedan buyers.”

The Malibu is offered in Korea with the same equipment as in the U.S. and other key markets, including a choice of either 1.5L or 2.0L DOHC DI turbocharged 4-cyl. engines, both with 6-speed automatic transmissions. Premium options include ventilated seats, heated steering wheel and Bose Premium 9-speaker sound system.

Korea’s midsize sedan market is hot and competition is intense.

It is of note Renault Samsung Motors released the SM6, its version of the Renault Talisman, in February and is meeting its sales targets. The SM6 sold 6,751 units in March, close to the volume posted by the market-leading Hyundai Sonata (7,053).

Speaking to reporters at the Beijing Auto Show this week, RSM’s CEO Park Dong-hoon says he is confident the initial 3-month goal of 20,000 sales for the SM6 will be met.

Pressured by the SM6 and new Malibu, Hyundai last week released the ʼ17 Sonata two months ahead of schedule. Despite added safety features and other changes, Hyundai kept the price nearly unchanged from ’16.

While GM Korea is hoping to do as well or better than the 7,000-plus monthly sales figures being logged by Hyundai's Sonata, it will be a dramatic achievement if it happens.

Only 786 ʼ16 Malibus were sold in Korea in March, so the new version will have to do 10 times as well to achieve its goal of outselling the competition.

Malibu sales could get a boost from a hybrid version due this summer, but no specifics have been provided.

If the sales goal is attained it will do much to placate GM Korea’s labor force. The automaker’s union has been ranting against a recent decision to keep importing the Chevrolet Impala from the U.S. The union had been pressuring GM Korea to produce the fullsize sedan at its Bupyeong plant, near Incheon.