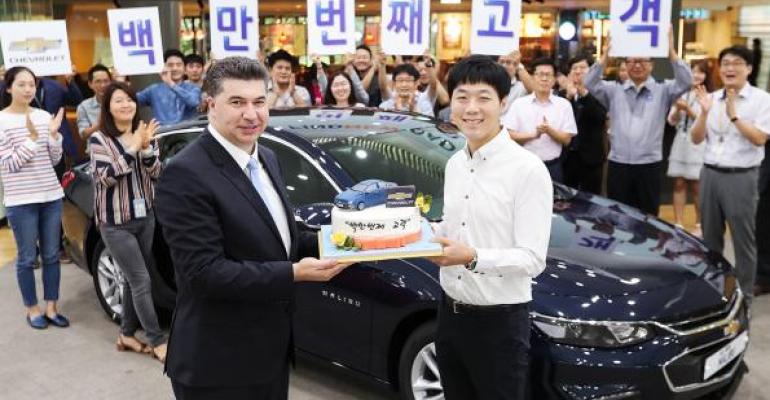 The union&rsquo;s conditions for accepting a wage and bonus freeze include GM Korea guaranteeing no layoffs for 10 years, issuing company stock to workers in amounts that exceed their 2017 wage and bonus payments and retaining all current benefits.

GM Korea’s management failed to make any gains in negotiations with the Korea Metal Workers Union ahead of the deadline set by the company to reach agreement on a 2018 wage- and bonus-freeze package.

“The company is trying to close the negotiations, but we don’t have any confirmed schedule of labor negotiations for this week so far,” a GM Korea spokesman tells WardsAuto.

GM International President Barry Engle told union leaders March 26 that if the KMWU did not accept the company’s proposed freeze by March 30, the automaker would miss an April 20 deadline for submitting a restructuring and turnaround plan to the Korea Development Bank and would have no choice but to file for bankruptcy.

GM Korea made no specific announcement about how it would respond to the missed deadline. The automaker has said, however, that if necessary it would seek to include a temporary wage and bonus freeze in the restructuring plan to meet the bank’s April 20 deadline.

The spokesman also says management is looking at restructuring operations at the Bupyeong 2 plant, which produces the slow-selling Chevrolet Malibu sedan and Captiva CUV. “This has not been discussed with the labor union, but there have been working-level discussions to improve the working system of Bupyeong 2 plant, which has (operated) at around a 50% utilization rate,” the spokesman says.

Union spokesmen say GM Korea plans to cut one of the two shifts at the plant, causing further job losses. They vow to fight the company’s Bupyeong 2 restructuring plans.

The Bupyeong 1 plant is running at capacity on two shifts producing the Aveo subcompact sedan and Chevrolet Trax compact CUV. Bupyeong 2 has been operating only two or three days a week producing the Malibu and Captiva.

The automaker already has announced it will close its Gunsan plant at the end of May.

The union is sticking to its conditions for accepting a wage and price freeze that it laid out before GM Korea’s March 30 deadline.

They include keeping the Gunsan plant open, issuing company stock to workers in amounts that more than match their 2017 wage and bonus payments, guaranteeing no layoffs for 10 years, extending the retirement age from 60 to 65 and retaining all current benefits.

The effects of the union impasse and widespread publicity of the company’s financial plight were reflected in GM Korea’s March sales report issued over the weekend.