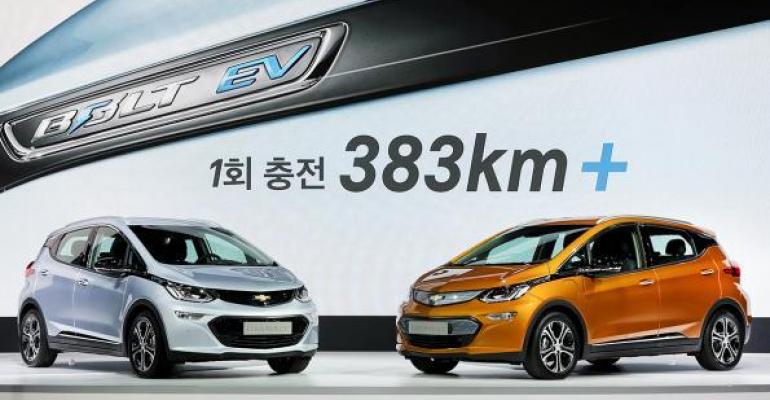 GM Korea Sales in Tailspin; No New Models for Plants

No new products for its plants are forthcoming, and industry-watchers see that as a red flag indicating the parent company&rsquo;s lack of confidence in GM Korea&rsquo;s sustainability.

Korean news media have stopped publishing articles about the possibility of General Motors pulling its operations out of Korea, but some analysts continue to question GM Korea’s continued viability in its present form.

Amid slumping sales and one major assembly plant struggling on life support, GM has assigned no new products to the Korean subsidiary’s factories. GM Korea badly needs them to optimally utilize its workforce and available plant capacity. But with none forthcoming, industry-watchers see that as a red flag indicating the parent company’s lack of confidence in GM Korea’s sustainability.

Since taking office Sept. 1, President and CEO Kaher Kazem has been meeting with worker groups to explain the company’s situation and implore them to pitch in to help reduce costs and work diligently to boost productivity.

The only addition to GM Korea’s sales portfolio in 2018 will be the Chevrolet Equinox midsize CUV, which will be imported from the U.S. A spokesman tells WardsAuto the sales launch date is sometime during the first six months of this year but does not elaborate.

GM Korea also plans to import 5,000 Chevrolet Bolt electric vehicles from the U.S., with the first shipment scheduled to arrive in Korea in April.

Meanwhile, GM Korea’s January sales continued the deeply negative trend that was set in 2017. January domestic sales of 7,844 vehicles were down 34% from December, and down 33% from a year earlier.

That happened in a domestic market in which rivals Hyundai, Kia and Ssangyong had year-on-year increases of 14%, 11.7% and 9.4%, respectively. The only other decliner was Renault Samsung, whose January domestic sales fell 14%.

The last new vehicle added to a GM Korea plant was the ʼ18 all-new Cruze, which had its sales launch last March. The new model was expected to significantly boost domestic sales, but that did not happen.

For full-year 2017, including a second surge triggered by the launch of a diesel variant in November, total domestic sales of the old, all-new and diesel models totaled 10,554 units, down 2.7% from 2016.

In January only 487 units of the Cruze were sold in Korea, falling more than 53% from the 1,046 sold in December. Sales in December benefited from big year-end discounts, special incentive installment plans and heightened promotional activity.

Analysts say the main reason Cruze sales didn’t take off is non-competitive pricing, which is influenced by the high-cost, low-productivity characteristics of GM Korea’s underutilized plants and workforce.

Some find it sadly ironic that because of escalating costs GM Korea, which designed and developed the first Cruze models, is unable to produce a competitively priced model for the home market.

Maintaining just the lackluster 800-1,000 monthly vehicle sales average of 2016 and 2017 is seen by some analysts as disastrous for the Gunsan plant, where the Cruze is produced. The facility has been hobbling at roughly 20% of capacity for the past two years.

Gunsan at its peak had 2,000 workers. The current workforce is employed only one or two days a week as GM Korea tries to ease the pain while the production line inches along.

The workers are paid by the hour and rely on government unemployment benefits to augment their drastically reduced earnings.

At one time Gunsan was the most automated of all of GM Korea’s plants and ran close to its 250,000-unit capacity until a big slice of Cruze production was diverted to the U.S. and GM decided in 2015 to pull the Chevrolet brand from Europe.

The Gunsan plant does export some completely built-up and completely knocked-down units of the Cruze and Orlando, but numbers are not publicly available. A GM spokesman tells WardsAuto exported vehicles are identified only by class and not by model.

GM Korea has a sizeable CKD export business, which probably is a key element in enabling the company to hold its ground amid corporate scrutiny.

The imported Equinox and the imported Bolt – which also was designed and developed by GM Korea at its Bupyeong facilities – obviously will not improve utilization of the plants. However, successful sales programs would have some impact on a bottom line which has been deep in the red for three consecutive years.

While the Equinox will launch in Korea’s hot midsize CUV segment, the Bolt goes on sale in a low-volume niche propped up by limited government subsidies.

When GM Korea began taking preorders for the Bolt last month it found 4,700 hand-raisers within the first three hours. However, it is not clear whether consumers hoping to buy the EV at government-subsidized prices will still sign firm orders for the full retail price of 45.6 million-48.8 million won ($42,500-$45,500) if they can’t qualify for the subsidies.

But the Ministry of the Environment’s national subsidy program is capped at about 20,000 vehicles. Registration to qualify for the subsidy is made at the provincial government level on a first-come, first-served basis.

With EV competition from other automakers and delivery dates of the Bolt not beginning until April, some customers could get shut out of the incentive program.

The field is formidable. For instance, Hyundai began taking preorders for the all-electric iteration of its new Kona on the same day GM Korea opened pre-orders for the Bolt. As of Jan. 31 Hyundai had 17,000 Kona EV pre-orders in hand. Hyundai also is pushing its Ioniq plug-in hybrid-electric vehicle.

Kia has the Soul EV available and will launch the Niro EV in the second half. Renault Samsung has just re-launched its SM3 ZE with a new battery pack that delivers longer range.