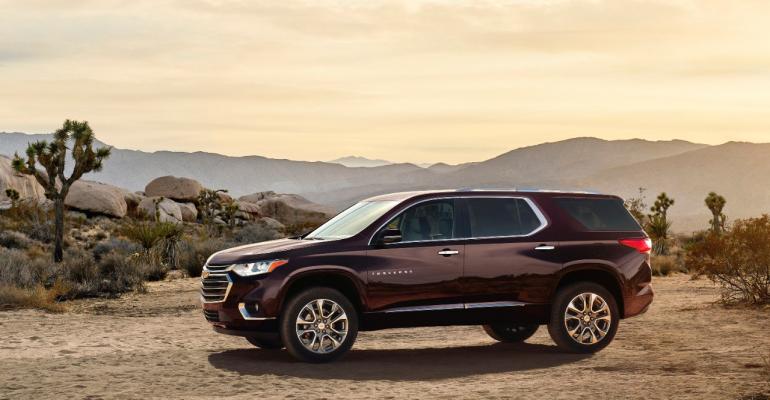 The automaker hopes to capitalize on Russians&rsquo; affinity for utility vehicles, whose sales have been steady despite the country&rsquo;s recent economic distress, and on U.S. vehicles&rsquo; overall favorable image there.

Projected sales volumes are not being disclosed. Analysts in the Russian Ministry of Industry and Trade predict GM Russia may sell between 1,000 and 1,200 units of the Traverse in its first year on the market.

The vehicle is not as well-known in Russia as GM’s Chevrolet Tahoe and Cadillac Escalade SUVs. But the automaker hopes to capitalize on Russians’ affinity for utility vehicles, whose sales have been steady despite the country’s recent economic distress, and U.S. vehicles’ overall favorable image there.

Sergei Lepnukhov, director-corporate affairs for GM Russia, says the automaker is satisfied with the current level of sales of its Chevrolet models. Chevrolet sales totaled 14,889 units through June, up 0.7% from the same period a year ago.

GM was Russia’s second-biggest automaker by sales volume as recently as 2014. But the country’s fiscal crisis, a product of Western economic sanctions and the falling value of the ruble, prompted GM in 2015 to halt both manufacturing operations and sales of its Opel brand, which it later sold to French automaker PSA. It continued selling some U.S.-built Chevrolet and Cadillac models.

The current range of Chevrolet models in Russia comprises the Tahoe, Camaro and Corvette. GM Russia plans to expand its offerings beyond the Traverse as the country’s economy continues recovering.

Ministry of Industry and Trade statistics show 130 Camaro deliveries in the first five months of 2017, their highest level since the model’s launch in Russia in 2012.

GM Russia operates nearly 100 dealerships within the country and plans to expand its network. The company also operates a large warehouse in the Moscow area where GM vehicles are serviced.

Some Chevrolets to Make Russian Comeback Under Ravon Brand
Oct 09, 2015