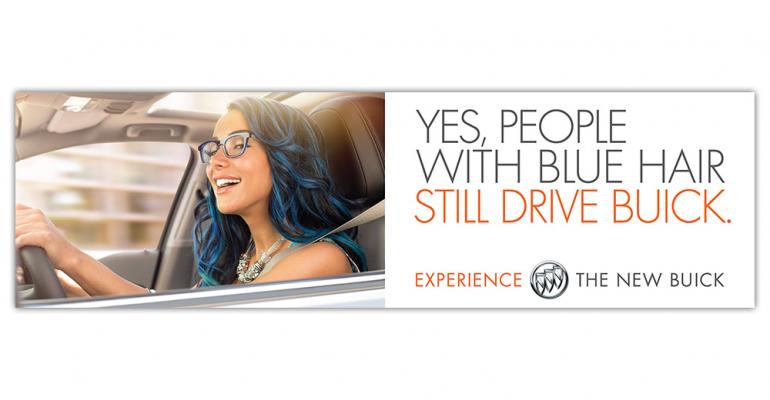 The work, by ad agency Leo Burnett, tries to shed perceptions of Buick associated with out-of-production models and align them with its fresh lineup of premium cars and CUVs.

DETROIT – General Motors marketers are extending the run of Buick’s successful “That’s a Buick?” advertising campaign by transitioning the message to key vehicle features from the broader, full-line communication that has been airing on national television for 13 months.

Tony DiSalle, vice president-marketing at Buick-GMC, says the campaign, which pokes fun at Buick’s longtime association with the senior set, has been overwhelmingly successful at shattering the “false familiarity” many U.S. consumers have with the brand.

In other words, the work, by Detroit ad agency Leo Burnett, tries to shed perceptions of Buick associated with out-of-production models such as the LeSabre and Century sedans and align them with its fresh lineup of premium cars and CUVs. That’s no easy task, given 80% of Buick vehicles on the road today, or roughly 500,000 units, no longer are being built.

“They are antiquated billboards for Buick driving around the U.S.,” DiSalle admits.

So far this year, Buick sales are down 4.7% to 68,721 from 72,112, although as DiSalle points out the performance reflects an industry trend away from the brand’s sedan-heavy lineup to the booming CUV segment.

As such, deliveries of the new Encore compact CUV are going great guns. Encore sales are ahead 30.5% through April to 5,587, making it the best-selling model in the Buick lineup ahead of the larger Enclave CUV.

Buick hopes an extension of the successful ad campaign, evidenced by a pair of Nielsen awards for the favorable impressions it leaves with viewers, can help pull more new buyers to the brand as the year unfolds.

DiSalle says the campaign owes its success to a consistent message across all marketing platforms, from local dealers to GM’s big national buys; aggressive use of it as part of Buick’s big sponsorship of NCAA football and college basketball; and an improvement in customer service at the brand’s stores, which according to J.D. Power ranks No.1 among the top 20 mass-market brands for a second consecutive year in 2015.

The executive also says the tone of the message strikes a chord because it portrays Buick as approachable, honest and human. It also uses self-deprecating humor and communicates unexpected surprises.

“It doesn’t have the same attitude as some luxury brands,” DiSalle says. “We knew we had something special as soon as we saw the (initial creative) boards.”

The campaign does not run from Buick’s recent history, either, Instead, it plays up the brand’s geriatric image with people young and old astonished the car they’re in is a Buick.

But consumers can tire quickly from repeated messages. DiSalle says his team closely monitors Nielsen data to avoid that problem as the number of TV spots has increased to eight.

“We think about that a lot,” he tells WardsAuto, “and it’s not even close to wearing out.”