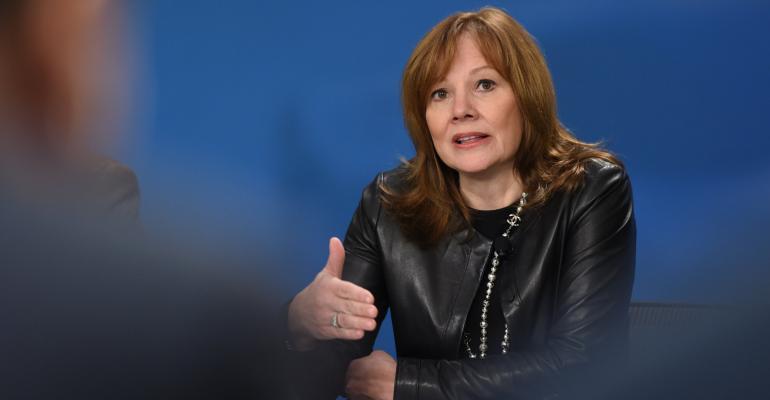 The chief executive also stands by GM&rsquo;s 2-year-old outlook for profitability in Europe by 2016, despite a year-end meltdown to the Russian market on the collapse of the ruble.

DETROIT – General Motors CEO Mary Barra offers a robust but conservative outlook for U.S. sales in 2015, forecasting deliveries of between 16.5 million and 17.0 million, and stands by profitability projections in Europe despite an implosion of the Russian market.

“It looks like sales will be strong in the United States and China, our two biggest markets,” she tells journalists today during a roundtable interview here ahead of the North American International Auto show next week.

Cadillac, down 6.5% year-ago, will continue to stay on its comeback plan, Barra says, and Chevrolet will launch five new vehicles in 2015 after sales edged up 4.4% in 2014. Both of those brands also will continue on their rapid expansion globally, she says.

“GM is moving in a very positive direction,” she says. “We’re getting to the core with the right product, the right brands and making the right decisions.”

U.S. market share, however, was flat last year although GM now boasts one of the industry’s youngest product portfolios. Last year, Barra expected a market share increase in the U.S., but the automaker closed 2014 with 17.86% of industry sales, according to WardsAuto data, vs. 17.94% in like-2013.

The chief executive says she wants healthy growth in GM’s second-largest market after China, rather than bragging rights.

“Before you grow, you have to stabilize and I think we’ve done that,” she says. “I will look for profitable growth. But clearly growth is important…the right way.”

Barra also stands by GM’s 2-year-old outlook for profitability in Europe by 2016, despite a year-end meltdown to the Russian market on the collapse of the ruble. GM and other automakers suspended sales there last month.

GM earlier had made major capacity and employment reductions at its primary assembly plant in the country, changed the management team and sought to localize more parts supply to reduce production costs. Russia’s woes could bleed onto GM Europe’s balance sheets because the country reports under that region.

“We’ve been monitoring the situation, making the changes and decisions necessary to manage the business as the exchange rate changes, to make sure we’re doing the right thing for the business,” she tells WardsAuto.

“Hats off to the Europe team,” she adds. Opel’s leadership manages Russia. “They’ve been proactive and responsive to issues to minimize impacts, but it remains a very important market.”

Russian LV deliveries through November were down 11.6% to 2.2 million units, putting the once-promising country on pace for a second consecutive annual sales decline.

Back in the U.S., GM and its Detroit-based rivals face pivotal negotiations with the UAW this summer on a new 4-year labor contract. The union has expressed a desire to roll back the 8-year-old, 2-tier wage policy credited with making the Detroit Three more competitive with its offshore- based counterparts also building in the U.S.

Barra says GM will approach the talks with a problem-solving attitude, but competitiveness will remain a key issue.

“My message there is getting issues out and solving problems,” she says. “The main thing is we need to make sure we’re on par and competitive from an industry perspective.”

Barra also addresses her first year as CEO and downplays the suggestion GM’s recall crisis distracted it from a broader strategy to reinforce the business five years after bankruptcy.

“We’ve got a really strong foundation,” she says, calling 2015 a year to sharpen GM’s focus in North America and China, continue restructuring in Europe and wring more efficiency out of its operations in the beleaguered Brazilian market.

However, Barra also admits the recall turmoil has altered her management approach.

“I’ve become more impatient and determined,” she says. “I would have (previously) accepted longer timelines to achieve something. Not anymore.”