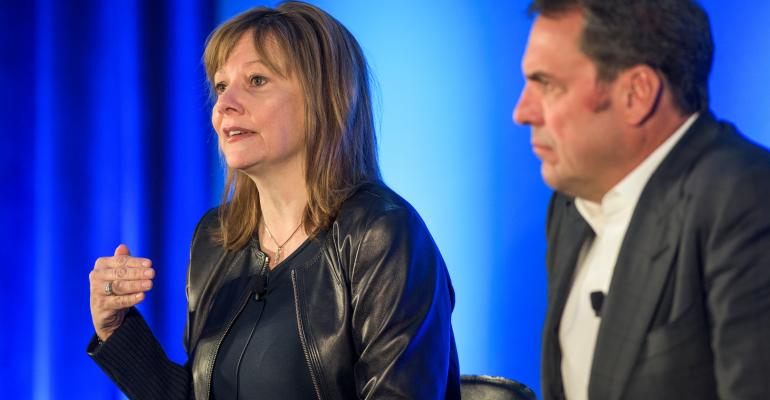 The plan, shown to investors and journalists today at the automaker's suburban Detroit proving ground here, also confirms future use of lightweight materials to improve fuel efficiency and expectations for 40% of its global sales volume in 2019 and 2020 to include all-new or refreshed models, up from 25% today.

Along with a predicted $5.5 billion in savings on purchasing, manufacturing and administrative expenses, GM expects the plan will increase its earnings and improve shareholder value.

“We are working to redefine personal mobility and how (people) will get from point A to point B, going forward,” Barra says in remarks ahead of presentations later in the day to the investment community. “We have a strong foundation to get there.”

GM’s future includes two new car-sharing and ride-sharing projects meant to test existing hardware and software systems, gain insight into the habits of users and add to the automaker’s bottom line. The first is already operating in New York City and the second will come to another U.S. city in the first quarter of 2016, the automaker says.

The projects build on an existing car-sharing partnership with Google, a program in Europe run by its Opel unit and the use of a fleet of electric concept vehicles at Jiao Tong University in Shanghai.

Many experts think car-sharing will grow significantly in the coming years as a new generation of drivers shuns the traditional ownership model. According to Navigant Research, revenue from the global car-sharing business will grow to $6.5 billion in 2024 from $1.1 billion today.

“In this space, it is important to get in and have experiments and learn what customer preferences are and how it changes driving behavior and what technology is most important,” Barra says, calling car-sharing another way to connect with customers outside of the traditional ownership model. “It forms one relationship for a whole variety of ways people can get (around).”

GM also unveils at the event an electric bicycle concept, which it says demonstrates the company’s commitment to evolving mobility in an increasingly urban world. The bike was designed at GM’s Oshawa, ON, Canada, engineering and development center.

GM confirms today a number of other initiatives. It continues to expect a commercially viable fuel-cell electric vehicle from its collaboration with Honda in the 2020 timeframe. The automakers FCEV research will expand into non-automotive sectors, as well, such as the military and aerospace industries.

GM’s autonomous-vehicle deployment will accelerate with the introduction of self-driving Chevy Volt cars next year on the automaker’s Warren, MI, R&D campus, and in the coming years with the debut of its “Super Cruise” technology on the ’17 Cadillac CT6 large luxury sedan.

“We are not doing this as a publicity stunt,” GM Executive Vice President and product-development chief Mark Reuss says.

The automaker will continue forward with its mixed-materials strategy, too. Focused on slashing carbon-dioxide emissions and improving fuel economy, the strategy employs a number of lightweight materials such as aluminum, composites and various grades of steel. A key element of the strategy is an industry-first welding technology for bonding dissimilar materials, such as aluminum and steel, with the first application on the ’16 CT6.

Reuss says the mixed-materials strategy will stretch to other GM products, but stops of short of providing details ahead of his remarks to Wall Street analysts.

“You’ll see that strategy play out in everything from (the Chevy) Cruze to Volt to Malibu to the CT6….to the whole portfolio,” he tells WardsAuto.

Barra also says she has not had any additional contact with Fiat Chrysler Automobiles CEO Sergio Marchionne about taking over his company. Marchionne proposed a merger of the two automakers earlier this year, but was spurned by Barra. He suggested in recent weeks he would use the investment community to push the tie-up ahead.

Barra reports talks continue with the UAW on a new 4-year labor contract, but will not say if the labor group has turned its full attention to GM after hourly workers at FCA US rejected a tentative agreement on Wednesday that would have served as a template for GM and Ford.

The chief executive also addresses the Volkswagen diesel emissions scandal, saying GM has made no changes to its technology in Europe ahead of what is expected to be closer scrutiny from regulators on the continent. GM rolls out new diesel technology later this year in the U.S. on the Chevy Colorado and GMC Canyon midsize pickups and next year on the Cruze.

“We have confidence in our diesel technology,” she says.

Reuss, a key proponent of diesels in light vehicles, adds, “We know how we design and calibrate and we feel good about that.”